The state of Texas has lots of beautiful places where you can find lost jewelry, old coins, and a lot of other lost valuables. The state has lots of coastline where beach-goers lost jewelry in the sands. There are lots of places that are popular with hikers and campers which increase the chance of finding lost items on camp sites and along hiking trails. 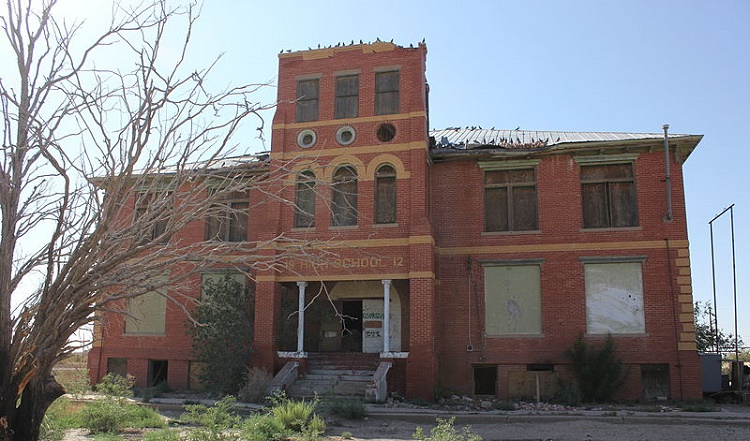 An abandoned school house in Texas. This would be a great place to hunt with your metal detector.

Texas also has lots of history and numerous old settlements that make recreational metal detecting a great way to located very old relics and coins. There are even quite a few treasure stories associated with Texas, so you might even want to try and find a real honest-to-goodness treasure!

Some places perfect for metal detecting in Texas include:

There are many rivers across the state attract lots of visitors every year in form of boaters, fisherman, and people who want to relax along the shores. Texas is a very hot state in the summer, so these places are quite inviting to recreate!

People lose items such as coin and jewelry among other things when they are recreating along the shores. These make such lakes and rivers a great place for metal detecting.

It might be worthwhile to consider a good waterproof metal detector

for searching in shallow water areas.

Always remember that some rivers and lakes form part of state parks and other lands that may prohibit metal detection. Always check the laws of an area before you decide to metal detect any water body within the state.

Texas is a historic state and has lots of old settlements and ghost towns that still have lots of potential for metal detectors. Spanish explorers traveled through Texas even prior to European settlement. There are some very old relics buried in Texas.

As a coal mining state in the 19th century and in the early years of the 20th century, Texas had lots of mining camps and towns that folded up once the mining was closed and the miners moved on to other places in search of employment. Today the state boast of hundreds of ghost towns in various stages of disrepair with some completely destroyed.

Ghost towns present a great opportunity for you to discover old coins, relics and hidden treasures in such places. To find some of the forgotten ghost towns and settlements study the local history and talk to senior citizens in the state. Most of the ghost towns are on private properties while others may be on public lands.

Remember to always ask for permission before metal detecting any ghost town on private lands.

And: Metal Detecting for Relics in Old Mining Camps

Of course, the cities and towns in Texas offer a great opportunity for metal detecting. These are the places where lots of people are, so there are lots of coins to be found. And since most modern towns in Texas are relatively old, you can find not only modern clad coins, but also older coins if you search in the right places.

Often the best places to metal detect in cities and towns are in the old downtown sections. This is usually where the town first got established and you will find the oldest coins and relics here. Hunting along the sidewalks, underneath parking meters, and the dirt areas around the old building could all result in good finds.

City parks also present a great opportunity for you discover lots of lost items. Metal detecting in parks increases your odds of finding some valuables such as modern coins and jewelry simply because so many people visit there every day. Remember that city parks and walkways are properties of the city and you will need to follow the city rules before you can dig up anything.

State parks and state-managed public lands present a great opportunity for you to discover old coins, relics, and lost jewelry. Texas has a lot of state parks and other public lands managed by the state. Parks are popular picnic sites and attract thousands of visitors each year. Some of them are actually quite old, so you might get lucky and find some old silver coins in addition to modern clad.

Metal detecting on school ground depends on the ownership of the school. Generally public school grounds are open for metal detection with a few exceptions, but you will want to do your research and make sure you are legal. Of course it’s best to hunt during off-hours and always fill your holes!

For private schools and colleges, it is recommended that you ask for permission from the management first before you hunt the school grounds.

There are more than a few different tales of lost treasure in Texas. Some of them may indeed be “tall tales” not exactly based in reality, but some are undoubtedly real and likely still buried somewhere in the Texas desert.

One of these tales is the Lost Bill Kelly Gold Mine. If the story is true, there is some rich gold ore hidden somewhere in West Texas.

There is also lost treasure that has washed ashore along the Gulf of Mexico from old Spanish shipwrecks. There are literally thousands of shipwrecks in the Gulf.

Some of them where old Spanish ships that were carrying gold and silver that was pillaged from Central America. Occassionally someone gets lucky and finds a gold coin washed ashore on the beaches.

Texas Metal Detecting – So Many Places to Go!

This state has so many opportunities for metal detecting. Whether you are simply interested in finding modern coins and jewelry at the park, relics in old ghost towns, or perhaps even a lost treasure hidden somewhere in Texas, there are plenty of places to hunt!