Arizona is one of the best states in the US for gold prospecting. Not only is there a lot of gold here, but there is also good access to public lands that are open to prospecting.

Gravity causes gold to concentrate in rivers, so they are always one of the best places to look for gold. Even though sometimes they are dry for parts of the years, the gold is still there if you understand the proper prospecting techniques to find it.

Here are 6 of the richest gold-bearing rivers in Arizona. Miners have been finding gold in these rivers since the 1860’s, and there is still plenty of gold left to find!

South to the headwaters of the Hassayampa River, and along the entire course of the river towards the county line two miles north of Wickenburg, there were many lode mines and placers along all regional watercourse beds, benches, terraces, and hillsides.

The gravels in the river near Walnut Grove contain many boulders but no clay; the gold is described as generally fine and flaky gold. The Hassayampa River was most actively worked between 1885 and 1890.

Many washes were reported as scenes of active placer mining, particularly around the Little San Domingo Wash and the San Domingo Wash, which drained to areas in the Wickenburg area northeast of the Hassayampa River.

The gravels in the Hassayampa River contain good gold for a few miles below San Domingo Wash.

Some nice gold nuggets found in the Arizona desert.

There were several sites where placer gold was found in the Colorado River mining area, which was along the river from the mouth of the Grand Canyon. Be aware that some (but not all) of the Colorado River is off-limits to prospecting due to special designation, and many of the old placer diggings are now covered by various reservoirs.

Placer gold was found at Temple Bar on the Colorado River north of the White Hills. Its riverbed, which was inundated by the waters of Lake Mead, had contained fine gold on both the Arizona and the Nevada sides of the river.

Coarse gold was reported to occur near an outer bow of the Colorado River in the Black Canyon quadrangle. Finely distributed gold contained the sand bars opposite El Dorado Canyon on the Arizona side of the Colorado River. Moderately coarse gold was recovered from a bench near the river, about two miles north of Pyramid Rock. This area now lies beneath Lake Mohave, about 4 miles north of the Davis Dam. 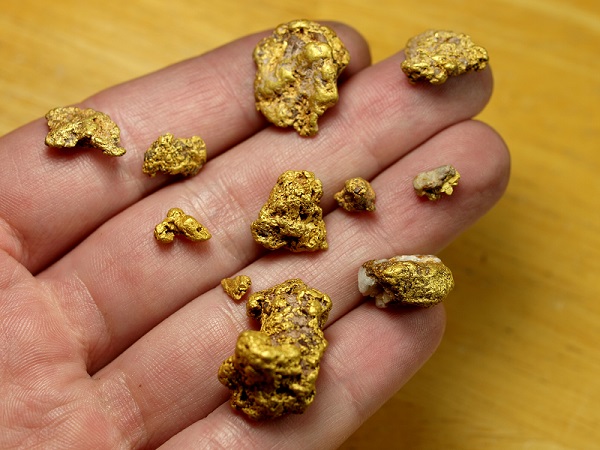 A hundful of Arizona gold nuggets.

Gravels have been dry washed from the Gila River to about 4 miles north of McPhaul Bridge. The San Pablo placer claiim was also located in the same area.

The Las Flores placer area is north of the McPhaul placer on the southeast slope of the Laguna Mountains. These small placers are found near the head of an alluvium-floored gulch in the vicinity of the old mines, Golden Queen and India Mines.

Some gold was found in gravels in other gulches on the southern margin of the mountains as far south as the Gila River.

The Gila River placers occurred along the Gila River from the junction of the San Francisco River southwest to Bonita and Spring Creeks. The placers areas are accessible by dirt road that parallels the north bank of the Gila River.

Gold was also found in ancient river gravels that mantled terraced bluffs of Gila Conglomerate along the Gila River downstream from the mouth of Eagle Creek to Bonita Creek (Graham County).

The placers in benches of the river near Oroville have attracted the most attention. Here, the richest gold-bearing layers occurred in thin pay streaks in channels at or near bedrock on the benches above the riverbed. The Bokares placer, four miles north of Clifton at Evans Point, was also actively mined.

South of Clifton, the river is curved and flows between bluffs of hard Gila Conglomerate. Gold was contained in old river gravels resting on the conglomerate in some of the curves. The Smuggler placer mine was at a bend in the San Francisco River. The gravels in this area contained much fine gold.

Small placer gold deposits were found in widely scattered areas in the Eureka district. Gold was also recovered during the late 1850’s at Old Placers near the Cowboy Mine in the vicinity of the Santa Maria River.

It was reported that placers occurred in Guebabi Canyon, which drains the northwest flanks of the Patagonia Mountains and crosses an alluvial plain to the Santa Cruz River.

Placers also occurred on the eastern side of Mount Benedict near the Santa Cruz River. Most of the gold here is very fine, and since the river is almost always dry due to the hot southern Arizona climate, it can be very difficult to recover much gold except in select areas.

Arizona, much like New Mexico and Southern California, presents a challenge for gold prospectors. The dry climate limits the use of prospecting equipment to a few select types of gear.

Whereas tools like gold pans and sluice boxes work great in much of the US, often the rivers in Arizona don’t actually have any water in them!

If this is the case, you will need to use some select equipment. Of particular interest are metal detectors and drywashers. These can be used without a drop of water.

While these rivers can concentrate gold, don’t be afraid to explore the many creeks and dry washes that feed into them. These are often much richer than the rivers themselves. As you get closer to the gold vein, the concentrations of gold can get richer and richer.

Next: Metal Detecting & Drywashing in Arizona