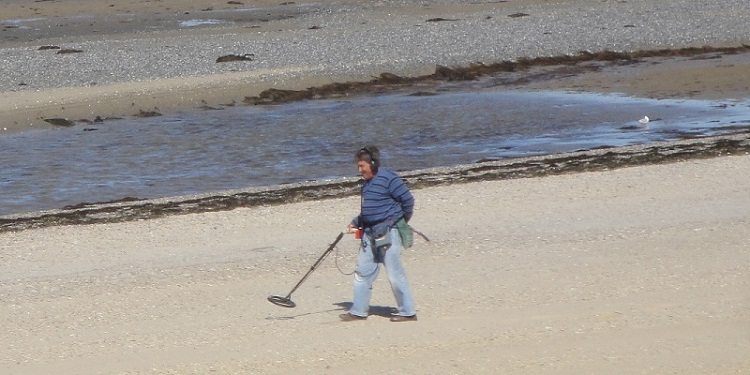 New York has had a long history of human settlements which makes it a perfect place to find buried artifacts and treasures from the early days of the state. As one of the oldest settled states in the U.S., you can find some exceptionally old coins and relics with your metal detector if you look in the right places.

Metal detecting is a great hobby because it will take you outdoors to some of the most scenic places in the state. Many of the best hunting locations are in abandoned ghost towns and old secluded homesteads that most people forgot about long ago.

Metal detecting is also a great form of exercise. You can get healthy by spending time outside all while searching for valuable items from the past. If you are successful, you might even be able supplement your income.

As a state with such rich history, New York has several places where you can start your metal detecting. Some of the best places for metal detecting with real treasure include:

Make sure you have the best tools required to carefully dig a plug so as not to damage the grass. It’s not hard to do, but this is a skill that every detectorist needs to learn how to do!

New York State has several beaches that attract lots of people throughout the year. Most of these beaches are open for metal detecting. Sandy beaches with high traffic are known to have lots of lost items such as jewelry and coins. A lot of other lost items in the sea are often swept onto the shores and can be found on the beach.

The law here requires that you could carry out your metal detecting activities only in the sandy areas, the seaward of structures and under boardwalks. All other places are restricted.

There are also lots of shipwrecks off the coast of New York, and valuable relics wash ashore from time to time. These discoveries are very rare, but it is possible to recover shipwreck coins and relics that are hundreds of years old. Finding the best areas to hunt for these relics requires extensive research to locate potential areas where the best items could potentially ashore.

New York has a number of historical ghost town spread across its vast area. Some of these ghost towns were once booming business or mining centers with populations running into thousands. The people and the economic activities that once supported these ghost towns represent a perfect opportunity for finding some valuables.

In most ghost towns you will find valuable old coins, artifacts from the pasts and even hidden treasure. People used to cache their treasure inside their homes to protect it from buglers and robbers, there is always a potential of finding something truly amazing. That’s part of the fun with metal detecting, you never know what you might find!

To find the best ghost towns for metal detecting you need to pay attention to the local history. This is particularly because some ghost towns have been destroyed completely and their site turned into farmlands, so there may be no visible evidence anymore. I can’t think of another hobby where research is more important than it is with metal detecting!

Your success or failure as a metal detectorist is heavily dependent on the amount of time you spend trying to located the old ghost towns that have not been hunted yet by other detectorists! Anybody can go to the park and find a few coins or a piece of jewelry, but if you want to find the really good stuff that dates back centuries then you have to hunt the older sites.

Getting Permission on Prime Hunting Spots

Getting permission to good hunting areas is one of the main factors that separates the most successful metal detectorists from everybody else.

Are you covered in mud from a long day of detecting? Are you wearing old beat-up overalls with a metal detector slung over your shoulder? When asking permission to hunt on someones property, think of how you would want to be approached by a stranger. Clean yourself up as best you can and be polite and professional. It will go a long way.

And: 22 Metal Detectors that Punch DEEP on Coins & Relics

New York has its own network of old and abandoned transport corridors. For a start, you could check out sites near the old railroad tracks and abandoned railroad stations. These are places where most coins and other valuables were handled in the past. By metal detecting these places, you stand a chance to discover some valuable coins and a host of other interesting relics.

Also, try out old stage coach routes and other old footpaths that are no longer in use. Often these places aren’t very well known so they haven’t been hunted very hard by other detectorists, so you have the potential of finding some real treasure.

Anywhere with Lots of People

The main trick to success when metal detecting in New York is to locate the areas were lots of people congregated at one time in the past. Anytime there were lots of people in a small area, you can be sure that they dropped coins and other valuables. Whether this is an old ghost town hundreds of years old, or the beach with more modern treasure this still holds true.

As a state with such amazing history, New York is an absolutely fantastic place to try metal detecting. The number of different places that you can hunt is almost endless. There are still so many valuables left in the ground waiting to be dug up.

Just imagine what you could discover?

Next: Gold Prospecting in New York