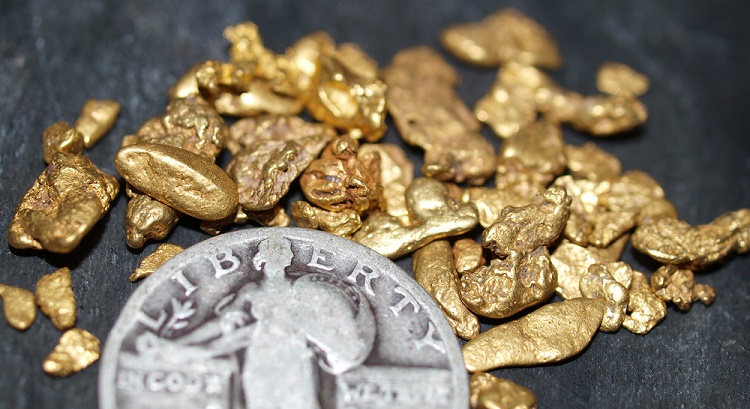 Some dandy gold nuggets found in the Klamath Mountains.

The California gold rush brought tenths of thousands of miners to California in 1948 and by 1950 there were prospectors on nearly every river in Northern California. Not long after the discovery of gold in the Sierra Nevada Mountains, miners began finding gold farther north in what later became Shasta, Trinity, and Siskiyou Counties.

The richest of these discoveries in this region was along the Klamath River. The river and its many gold bearing tributaries accounted for considerable quantities of gold.

The earliest discoveries in the area were by miners who were prospecting the Trinity Alps and the Klamath Mountains. By mid-1850 gold was discovered on the main stem of the Klamath River, marking the start of the long gold mining history on the river. Richer placer gold deposits were discovered at Yreka and the French Gulch in 1851.

Copper Creek is a tributary of the Klamath River. Gold was first discovered in the creek in 1851. The river was named Copper Creek by the miners because of the color of the cliffs along it.

Gold mining in the early 1850s was mainly done by use of simple sluice boxes. However, by mid-1850s most of the gold deposit on the river bed had been exhausted. The miners began using hydraulic mining to extract gold ore deep in the river valley and the surrounding hills.

It is reported that thousands of gold ounces were mined in the creek in the 1850s. Today there is less mining on the creek, although a number of gold prospectors venture in to continue the search for gold.

Happy Camp prospered in the 1850s as more gold continued to be discovered. It grew rapidly and had several stores, a ferry and a number of other businesses. Today this section of the river is open for gold panning and a number of prospectors have success finding gold flakes and nuggets by using a gold pan

The Scott River is a major tributary, flowing for 60-miles before entering the Klamath River. Gold was found to be very rich in the gravels. The richest section was at Scott Bar, downstream of Scott Valley. Miners recovered considerable gold from this major river in Siskiyou County.

Another good gold-bearing tributary is the Salmon River. The river drains some of the high country in the Klamath Mountains that has historically produced some very nice gold, both as placer and hard rock deposits.

And: The Feather River is Loaded with Gold!

This was one of the most productive tributaries of the Klamath River during the gold rush days. Gold was discovered on the Trinity River in 1851 during the California gold rush. The news of gold discovery on the river spread fast bringing in thousands of miners in the first few months of the mining.

During the early years of the gold rush, mining on the river was mainly small scale placer operations done using simple tools. Later as the gold on the river bed was exhausted miners began digging terraces and bench channels for hydraulic works of the nearby hills and mountains. Most of the gold mined at this time was lode gold in areas around the river. Dredging was later used especially in the region near Weaverville and Junction City.

In the late 1800s, suction dredging was used throughout the river to recover some of the gold left behind by the miners who used sluice boxes in the early days of mining on the river.

Gold mining in the Trinity River continued through 1959 producing about 1,750,000 ounces of gold. The largest hydraulic mine was the La Grange Mine located near Weaverville. The largest dragline dredges were near Junction City.

Today the river is popular with gold prospectors as some gold still remains from the early mining days. Quite a number of prospectors have found some large gold nuggets, although they are certainly harder to find today than they use to be. Some prospectors use metal detectors to find nuggets throughout the Klamath Mountains.

This is was the first site of gold discovery on the Klamath River. Gold was discovered in Clear Creek in 1849 by French prospectors who established the town of French Gulch. The French miners used simple panning methods to produce thousands of ounces of gold from the creek.

Following the discovery of gold on the Clear Creek, miners established the Washington Mine in the nearby hills in 1852. This mine was made up of gold-bearing veins that bore high-grade gold. The mine produced about 185,000 ounces of gold over the years. The mine and all the surrounding lands still have some gold and has great potential. Clear Creek is close to Redding, so it is a very popular area.

Gold in the Klamath River and its Tributaries

The Klamath River is popular as a site for recreational gold mining. However, the current ban on suction dredging in California has definitely had an impact on the amount of gold being mined here compared to years past, but pans, sluices and highbankers

can still be used.

This is still one of the most beautiful places in California, and also one of the richest. There is so much gold waiting to be found in this area. In fact, some prospectors think that the Klamath Mountains may be one of the best prospecting areas left in the United States.