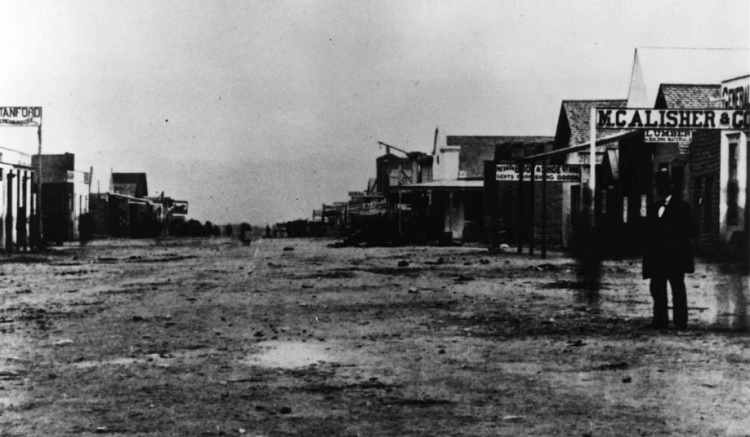 The history of mining in Tombstone can be traced back to 1877 when Ed Schieffelin an anti-Chiricahua Apaches scout stationed at Camp Huachuca discovered silver in the region near the Goose Flats. Ed named his claim Tombstone because he had been warned against venturing into the surrounding wilderness to their camp that the only thing can be found there is his own tombstone.

Word about the discovery of silver in southern Arizona spread fast bringing in hundreds of prospectors, speculators, businessmen, homesteaders, gunmen and lawyers among others. In early 1879 a town was set out on a flat land near the mines. At first, it was known as Goose Flats but later the name was changed to Tombstone after the first silver claim in the area.

The Silver Boom in Tombstone

The town grew rapidly and reached a population of over 15000 people by mid-1880s.

Following other discoveries made in the area marked out a mineral belt that extended to about five miles both to the north and south of the town and about eight miles to the west and east. Although Ed’s discovery spurred lots of mining activities in the area, it was not the first silver discovery in the region.

Silver had been discovered in1859 along the San Pedro River but the hostility of the Apache communities made it difficult for any meaningful prospecting and mining to take place.

The area in which the Tombstone mining district is located is physically made up of a series of rugged hills that gradually merged into the towering Mule Mountains and touched the Dragoon Range to the North. Below the hills the geology of the place is mainly made up of Porphyry rocks with lime and quartzite is several places.

The silver discovered at the Tombstone mine was found in chloride form with little combination making the mining process quite easy. In fact, most of the early miners in the area mined their silver simply by panning.

By 1880 there were over 3000 mining claims in the Tombstone district. Most of these claims were small operations that did not make a lot of headlines with their productions. However, there were several established operations with machines that produced thousands of tons in ore.

Some of the notable mining operations in the district include the following:

All of these mines were owned and operated by the Tombstone Gold and Silver Mining Company. The company invested heavily in the mines most of which used open cuts, drifts, winzes and shafts. The ore from the mines was processed at the company’s two mills located along the San Pedro River. Of the two stamp mills, one had 20 stamps while the other had 10 stamps.

To aid in the processing of the ore the company employed hundreds of men and is reported to have mined silver and gold worth thousands of dollars.

The Grand Central Company’s mine was another great mine in the region. Mine was on a 1500 feet by 600 feet claim that was rich in silver ore. The ore mined was processed at the company’s 30 stamp mill on the San Pedro. It operated for several years before being shut down after the rich ore was exhausted.

The Girard mine was another notable mine in the Tombstone mining district. The mine was set on a 6 feet vein and had a shaft that had a depth of about 400 feet. The mine produced gold at about 70 oz. a ton. The ore was processed on a mill on the San Pedro.

There were several well-established mined in the western part of the Tombstone district. Some of the most prominent mines in this section of the district included:

The other group of productive mines in Tombstone was located at about three miles off the San Pedro. The Mines included the Bradshaw mine which was rich in gold ore, the Alkey Mine which was also a leading gold producer and the Bronkow Mine which was mainly a silver mine.

Mining Slows to a Crawl

Mining continued all over Tombstone for a couple of decades until the mid-1920s when most of the ore had been mined out. By 1930 most of the mines in the district had closed down and most of the miners left town. Mining however continued on small scale for more years. Today the town of is a small town of just about 1000 people. People still venture out into the desert in search of gold and silver using metal detectors and other simple tools.

Next: 5 Places to Find Petrified Wood in Arizona