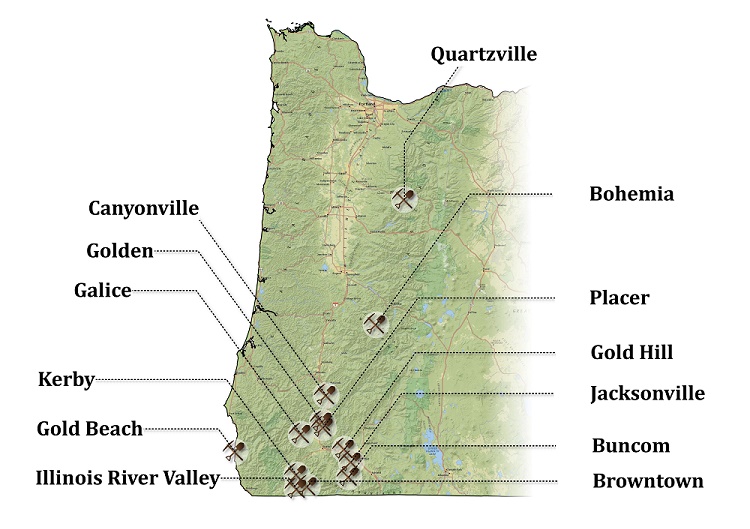 Quartzville is the northernmost mining town in the Oregon Cascade Mountains. Gold can be found on Quartzville Creek in the section that flows into Green Peter Lake.

Several miles of the creek is designated as the “Quartzville Recreation Corridor” and is open to the public of a variety of activities including gold prospecting.

This was an isolated mining town in the Calapooya Mountains southeast of Eugene. Most of the mines are located toward the top of the mountains ridge.

Some of the creeks in this area do indeed carry some gold, but most of the gold recovered in this district were from hardrock mines.

Canyonville is one of the oldest towns in Oregon. Gold was found in the Umpqua River and there is still plenty to this day. Panning along the gravel bars of the river in late summer can be productive.

Galice was one of the major mining towns in southern Oregon during the height of the gold rush. It is located near the Rogue River, now within the section that is designated as Wild and Scenic.

Plenty of gold was found in the current river channel, but it was an ancient buried river channel a short distance to the west of the current canyon that really paid well for the miners. Most of the mining activity was up Galice Creek. There are still some active mines here today. 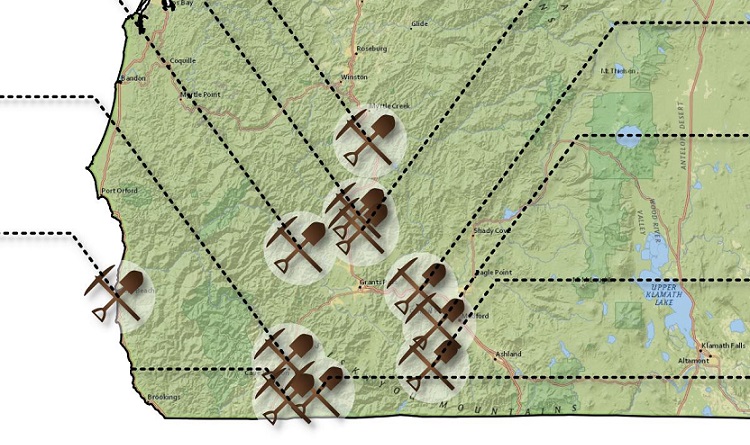 Kerby is a small town along the Illinois River Valley near Cave Junction. It was the site of one of the earliest gold discoveries in Oregon.

The Sailor Diggin’s are found near Kerby. This was a large hydraulic mining operation that recovered large amounts of gold during the gold rush.

The sands along the beaches of southern Oregon contain a surprising amount of gold. The beaches around Gold Beach and Coos Bay are probably the richest, but placers can be found from Florence all the way down to California.

The gold is extra fine, so you have to be a skilled panner to capture it. Miners also found gold in ancient beach shores about 150 feet above the present level of the ocean.

Read: Gold is Hidden in the Sands of Southern Oregon’s Beaches

And: 6 Best Beaches for Oregon Agates

The Illinois River was one of the richest in all of Oregon. There were countless little gold camps all along the river during the 1850s and 1860s. Gold can still be found here all throughout the river system.

Lots of gold was mined in the town of Placer, which is on Grave Creek upstream from Leland and Sunny Valley. Grave Creek has good gold all the way down to where it enters the Rogue River.

Gold Hill is an old mining town, and this area is particularly well-known as being “pocket country.” Gold Hill itself was covered with small pocket sources of gold, some as rich as several hundreds of ounces of gold!

The Rogue River at Gold Hill is particularly rich as well, and miners have recovered considerable amounts of gold from these waters.

Also Read: 9 Places to go Gold Panning in Oregon without a Mining Claim

In 1851, prospectors traveling through Jacksonville discovered gold, and by 1852, the town had well over 2,000 residents. It was not long until Jacksonville was named as the county seat for Jackson County.

The town grew and flourished until 1884 when the railroad was rerouted through Medford, completely bypassing Jacksonville. Prior to that time Jacksonville was easily the financial center of southern Oregon. As the mining industry slowly began to fade away, Jacksonville did continue to move forward with the introduction of agriculture as an economic factor. The city continued to growth but later did face another hit when, in 1927, the county city moved to Medford.

One of the early mining camps along the Little Applegate River was at Buncom, where Sterling Creek enters. Lots of gold has been mined in this area.

Browntown was once a booming little mining town on Althouse Creek. Experience Oregon miners know about Althouse Creek. It was the site of some of the largest gold nuggets ever to be mined in the entire state.

Not much remains of the townsite itself, but the surrounding mountains still hold a lot of gold. Althouse Creek, the Illinois River, and the countless tributaries are all worth exploring with a gold pan.