For an area that never had much in the way of commercial mining, New England actually has a surprising amount of gold.

There are 24 rivers in New England where you can find gold by panning and sluicing, but you should also keep in mind that gold isn’t just in rivers. There are also hundreds of smaller creeks that are worth exploring too. This article should help you get started. 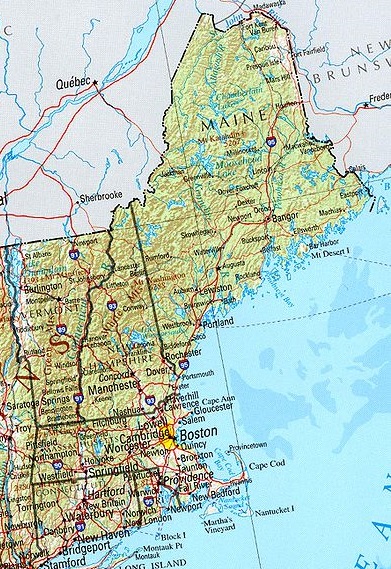 You can find gold in several parts of the river, but the East Branch near Bryon is a favorite.

There is fine gold in the Sandy River around Farmington and Madrid.

The headwaters start at the Quebec border and fine gold can be found in the river throughout Somerset County.

One of the well-known gold-bearing locations in Maine is the Cupsuptic River near Rangley. Several other creeks around Rangley will produce gold by panning.

There is gold in the St. Croix River, but it is extra fine textured and can be difficult to capture.

The Ammonoosuc River is a great place to do some gold prospecting. Fine gold is present all through the river although some areas are better than others. Also check the small tributaries that flow into the main river.

This is probably the most popular gold panning location in New Hampshire. The section that flows through the White Mountain National Forest near the town of Bath has been historically rich.

Gold here is very fine, but it is present in many areas. Search exposed gravel bars.

Near the towns of Rumney and Plymouth, New Hampshire you will be able to find some gold in the Baker River.

One great place to find gold is near the town of Bridgewater, Vermont. The Ottauquechee River flows through the area and gold has been found to be particularly rich in this section of the river.

The White River in Vermont has been prospected for gold and a decent amount has been recovered over the years. The gravels will still yield some nice gold if you dig in the right places.

Where it flows through Brookside, South Newfane, and Williamsville is a known gold mining area. There is also some gold in the West River here too.

Search around the town of Chester, Vermont. Highway 103 provides good access to much of the river.

Gold can be panned from the Black River near Ludlow, Vermont.

The Mad River at Warren, Vermont is a known gold producer.

The Lamoille River flows into Lake Champlain and has been known to contain gold for centuries.

The Missisquoi River is another that drains into Lake Champlain where you can recover gold. Check the areas around Troy and Lowell.

Hogback Mountain in Vermont is believed to be the source of the gold that is found in the Little River. The drainages that come off the mountain will result in gold if you take your time and put in the effort.

Many waters around Westfield, Massachusetts have gold, including Westfield River. The West Branch of the river is also worth exploring. There was quite a bit of mining done here during the Great Depression.

Check around the towns of Charlemont and Deerfield, Massachusetts.

Around Northampton, Massachusetts you can find gold in the Mill River.

The Fall River has gold from where Couch Brook enters all the way down to the Connecticut River.

More about Gold in Vermont

There are fine gold deposits in the Farmington River. You will need to find exposed gravel bars and search for layers of black sand. They are likely to contain some gold.

The Naugatuck River does have some gold, but it is many of the brooks that drain into it that are likely to result in a lot more gold.