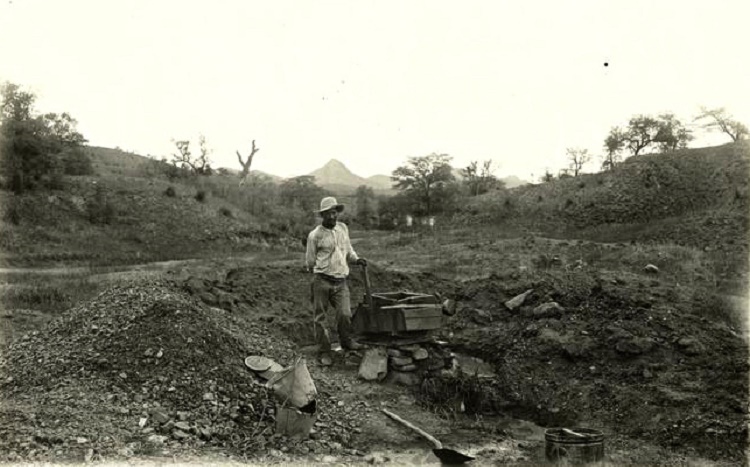 A gold miners digging a dry gulch in Greaterville. There was good gold here, but the limited water made mining very challenging.

The Greaterville gold placers were discovered by A. Smith in 1874. After this, the boom started and many people came to these highly sought after placers to get rich and start mining some gold for themselves. The area became populated and eventually formed into a small town and community that were based strictly on mining for gold.

In this article, we have looked at the Greaterville area and why it was a great place for prospectors to start looking for gold.

The exact site of Greaterville sits on is now private property, but much of the actual mining in the area is done in the many dry desert gulches surrounding the town site. There are still some places that a person can metal detect and drywash for gold around Greaterville if you do your research. Most of this mining area is within the Coronado National Forest.

The Gold Strike at Greaterville

In 1874 after a man by the name of A. Smith discovered these placers, it set off a boom and many people were drawn to the town. The next decade saw many people prospecting with reports of some finding more than $10 worth of gold every day. Pretty good recovery considering price of gold at the time.

0n March 17, 1875, the Greaterville Mining District was organized and this drew many more miners to start excavating the various gold bearing gulleys in the area.

Many reports have claimed that miners were finding gold nuggets valued at up to $50 a piece and there was even one report claiming that they found a massive 37-ounce gold nugget in the placers. After this boom, a bunch of saloons, stores, and even a dance hall opened to cater to the needs of the community.

Failed Efforts to Effectively Mine the Desert

The Santa Rita Water and Mining Co. decided in 1902 that due to the successes of hydraulic mining in the placers of California that they would get a few investors and try this same technique in the area. Unfortunately, this project was not as successful and the price of transporting water to the area was around $175,000. Too expensive to operate at a profit.

In 1914, the Greaterville Dredge Gold Mining Co. bought around 110 acres of the area and the plan was to harvest water from the local wells. Since this also would have been extremely costly, the plan too was eventually scrapped and never came to fruition.

The Greaterville town site is not accessible to the general public, but there isn’t a whole lot left to see now anyways. There is a couple old buildings and a small cemetery.

Kentucky Camp is another small ghost town within the Greaterville Mining District that was acquired by the Forest Service back in the late 1990s. There is even a restored cabin there that can be reserved for camping by the public.

A trip to this area is definitely worthwhile, whether you are looking for gold, or you just have an interest in early Arizona mining history. Many prospectors have managed to find gold in the area in recent years. Water was a big issue for the early miners, but today most miners prefer to use metal detectors which don’t require any water.

There have been some big, solid gold nuggets found all around Greaterville. There is also a lot of gold/quartz specimen gold. Both can be located by metal detecting in the dry desert washes throughout the area. There are several mining clubs that have active claims in the area that might be worth looking in to.

Read: 77 Gold Prospecting Tips – How to Find Gold Like a Pro

Visiting the Greaterville area will certainly be a great experience, and the quiet break away should be perfect for anyone looking for some peace and a chance to rest. The higher elevation also means that the weather can be quite a bit cooler than in the nearby desert.

Greaterville has been prospected hard over the years, but the limited water has always limited efficiency. The nature of the gold here is also interesting. Gold can be found just about anywhere, including up on benches and high on ridges. So don’t just hunt the washes, try some new areas to find gold that others have missed!

Next: Early History of Silver Mining in Tombstone, AZ