The Dalton Gang or the Dalton Brothers were a group of outlaws who were widely regarded for their specialize work in train and bank robberies.

The oldest Dalton boy, Frank, attempted to keep the others in line when he became a Deputy US Marshal. His brothers, Grat, Bob and Emmett also became men of the law and rode with him in posses for a while until Frank was killed while tracking down a horse thief in the Oklahoma Territory on November 27, 1888.

Frontier conditions proved hard for the boys and after not being paid money that was owed them, they turned to a life of crime and took to becoming outlaws. 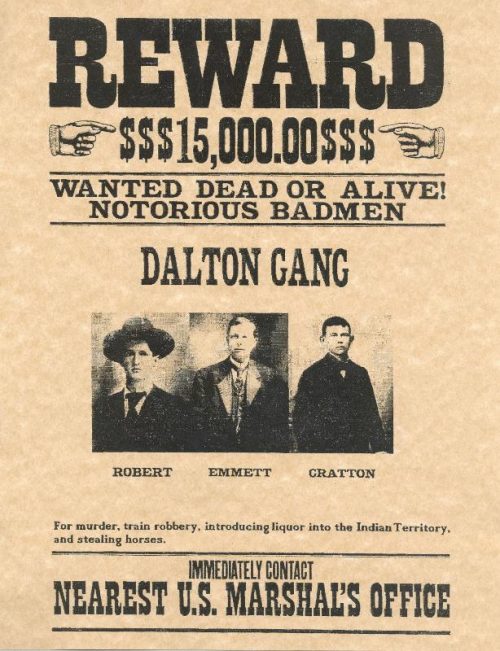 In 1886, the Dalton family moved to Coffeyville, Kansas. The boys went on to rob several trains and engaged in numerous shootouts throughout the West.

There amount of train and bank robberies that the gang was involved in made them one of the most feared gangs at the time. Robberies in California, New Mexico, Kansas, Arkansas and Oklahoma among others.

For several years, robberies were common and the amount of money that they rode away with was staggering.

And: The Plummer Gang – Stolen Gold and Buried Treasures of Montana

Capture of the Dalton Gang

On October 5th, 1892, the Dalton Gang rode into Coffeyville, Kansas in an attempt to rob two different banks, the First National Bank and the Condon Bank. In roughly 12 minutes the boys made off with about $25,000.

Emmett survived however and was captured, tried, and convicted and was eventually paroled after serving 14 years.

This was the end of the Dalton Gang, but many questions remain about what happened to their stolen loot.

Lost Treasures of the Dalton Gang

There isn’t a tremendous amount of information that can be found that guides treasure seekers to the lost fortune of silver and gold coins that were stolen and buried by the gang on the evening prior to the infamous shootout that took 4 of their lives. It has been said however, that the cache is estimated to be worth somewhere between $9,000 and $20,000 (1892 value).

Legend has it that prior to the Coffeyville robbery, the Dalton Gang robbed a Missouri-Kansas-Texas train somewhere near Wagoner, Oklahoma, then another by Adair. Between these two robberies, the gang made off with about $10,000.

Then a couple of weeks later they held up a bank in El Reno, Oklahoma, making off with $17,000. The boys took that money and used it to invest in some new clothes and saddles carried the remainder of the loot in saddlebags as they headed back to Coffeyville.

It has been said that somewhere near Onion Creek where it joins the Verdigris River close to the Kansas-Oklahoma border, the gang set up camp. Wanting to enter the town without their loot, they decided to bury it in a shallow hole that was dug adjacent to where their campfire was burning. Before leaving the next morning, Emmett told the fellow members that if they happened to become separated, they would rendezvous at the same site to retrieve their loot and escape deep into Oklahoma.

Following Emmett’s release from prison, law enforcement thought for sure he would return for the buried loot and they tailed him for several weeks but he stayed far and clear from Onion Creek. Years later he admitted in an interview that he felt that the coin cache was tainted and wanted nothing to do it it. Many people believe that it remains there to this day.

The Location of the Coin Cache

For many years the exact location of the campsite has been heavily debated for years, however recently information was released that narrowed down the area a bit.

The information went on to claim that on the morning that the Dalton Gang set out for Coffeyville, a young rancher’s daughter by the name of Mary Brown was out riding her horse when she heard several voices close to Onion Creek. A few minutes later, she saw five men ride out from underneath of a small wooden bridge across the creek and made their way in the direction of Coffeyville.

Several years later, she heard the tale of the silver and gold coins that were said to be buried at the campsite and she set out to find them. Unfortunately, time had changed the landscape drastically. The old bridge was torn down, areas of the creek had changed courses and the road had been completely relocated. Though Brown searched for an entire day she was simply unable to locate the exact location that the Dalton Gang had camped that day.

Is the treasure still buried there? Is there still treasure waiting to be found?

With the amount of robberies that the Dalton Gang took part in during the time, there is a good chance that there are several caches still buried out there somewhere.

Next: The Lost Padre Gold Mine in New Mexico