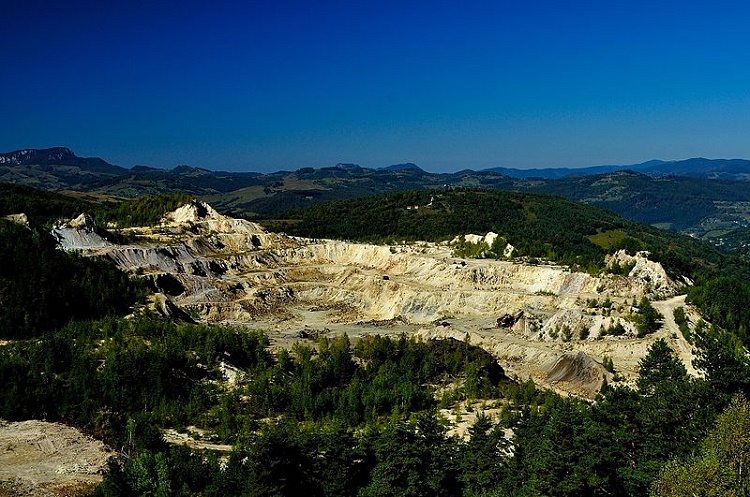 Roșia Montană gold mine is a silver and gold mining project located in Rosia Montana Romania. The mine is owned by the Rosia Montana Gold which is made up of Gabriel Resources that owns 80% shares and the government owned Minvest Deva which owns 20% shares and receives 6% royalty from the sale of gold and silver mined at the mine.

History of the Rosia Montana Mine

Gold has been mined in Romania since the days of the Roman Empire, yet the history of the Rosia Montana gold mine is relatively young. It can be traced back to 1995 When Frank Timiș; a Romanian of Australian origin established a mining company known as the Gabriel Resources, on the Channel Island of Jersey.

Timiș consulted with the Romanian state and, in 1996, they entered an agreement with Regia Autonomă a Cuprului Deva, a state owned corporation to form the Eurogold Resources joint venture to mine minerals from past exploitation in Rosia Montana.

Gabriel Resources was to have 60% of the shares in the new company but in a new agreement a year later, the Gabriel Resources stake was increased to 80%, while state’s cooperation (through Minvest) was dropped to 18.8%.

The Eurogold Resources Company was then renamed “Roșia Montană Gold Corporation” in 1999.

The Eurogold Resources took possession of the mining licenses owned by Minvest Deva at its formation and invested heavily in the mining. Between 1999 and 2000, the boundaries of the Rosia Montana gold mine were expanded from 12 km² to 20 km² and then later 42 km².

Gabriel Resources, which is the majority shareholder in the Rosia Montana gold company, conducted a major a land survey in 2000, which estimated that the four mountains that surround the town of Rosia Montana could produce considerable amounts of both silver and gold if blasting and cyanide extraction processes are used in their exploitation.

The company wants to grind about 218 million tons of rock that could produce dust having particles with a diameter in the vicinity of 74 and 150 micrometers. The dust would be filtered with cyanide so as to extricate the gold.

The small size of the particles and the subsequent sludge would have an extensive amount of cyanide mixes: as per RMGC measurements, around 500 tons, out of an aggregate of 214.9 million tons of sludge.

The sludge would then be kept in a 45-hectare tailing lake, which would be based in the Valley of the Corna River, requiring a dam of 600 meters width and 185 meters height and subsequently changing the course of river.

This report brought about a lot of friction between environmentalist and the Rosia Montana Gold Corporation. The company asserted that the lake would be protected from invasion because of the impermeable clay on the slopes. This was debated in a 2013 report by the Geological Institute of Romania, which stated that the company overlooked the real geographical setting as the left slope is made of exceptionally permeable sandstone.

The Institute contended that the valley can’t be used securely to store such an expansive amount of tailings and proposed as an answer the lessening of the amount of tailings by use of a flotation process together with the application of the Porosity sealing at the base of the pond.

The Geological Institute additionally voiced worries that the technique for exploitation would prompt the loss of expansive amounts of germanium, tellurium, arsenic, lead, and zinc. The presence of prominent amounts of copper, lead and zinc in the metal would prompt an increment in the use of cyanide, a lower recovery rate for gold and silver, and prompting sulphocyanide-rich sludge.

The company disputes the presence of metallic minerals large amounts, which is repudiated by the Geological Institute.

Resistance to the Mine

The ecological effect of the Roșia Montană Project regarding the use of cyanides along with open pit mining have put the mining companies and the local population at odds.

The mine would take up an expansive area, including four mountains, which would, as per the plans of the project will be blasted away have created a lot of resistance to the Rosia Montana Mine Project.

The utilization of cyanides in mining gold has been a major issue of contention as well, particularly because of the fear of spillage into streams and the groundwater.

This dread was increased by an incident involving another gold mining company in Romania, which correspondingly guaranteed high-end techniques to contain the contaminated tailings but had a dam burst and the cyanide-filled water of the tailings pond spilled into the Danube, starting one of Europe’s greatest ecological disasters.

Next: An Overview of the Open Pit Mining Process