Gold was discovered in Anchorage in the late 1880s turning the region into a shining mining area almost overnight.

Over the following years, several mines were established in the area producing hundreds of thousands of ounces of gold. Over the next few decades, Anchorage was an active gold mining center with a number of active mines.

Today there are a number of gold mines where you can still mine for gold. Some of these are the original gold mines established in the 1880s and 1890s during the Alaskan gold rush. Although they no longer produce gold commercially, they still have some gold and allow gold prospectors to try their hands at gold mining. 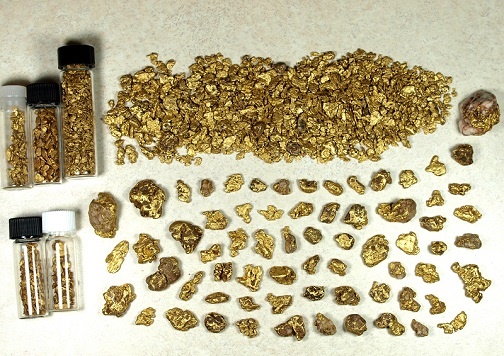 5 places where you can mine gold in Anchorage today include:

The Indian Valley Mine was established in 1910 by miners who came to Alaska following the Alaskan gold rush. It was a successful mine well into the 1920s producing thousands of ounces of gold in the process.

Today the mine consists of three original mine shafts, a log assay office, a log cabin and gully that brings water to the mine. Here you can tour the historic mine and learn about the history of gold mining in the mine and the region, visit the gift shop and try your hand at gold panning.

The Crow Creek Mine is one of the best known hydraulic gold mines in Alaska. The mine was established in Anchorage in 1896. The mine was one of the most productive mines in the region producing as high as 700 ounces of gold per month at its peak. The mine continued producing gold commercially until the start of the Second World War when it was shut down for the last time.

Today the mine is owned by the Williamson families who have been running the mine for the last 40 years. The mine is made up of a number of historic buildings, original mining equipment, hiking trails and beautiful mountain scenery.

The mines still produce gold and allow visitors to pan for gold.

Sixmile Creek is located to the south of Anchorage just six miles from the Cook Inlet along the Turnagain Arm. Gold was discovered here in 1895 and mining commenced almost immediately. Mining at the site was done using simple tools such as sluice boxes until the start of the First World War when mining stopped due to the exhaustion of the mine in the area.

Hydraulic mining was done in the 1930s producing over 2,000 oz. of gold. The most productive region was the area near the confluence of the Canyon Creeks and the Sixmile Creek. After the hydraulic mining ended in the 1940s, small scale mining has been done in the mine by individual prospectors producing some valuable gold throughout the years.

Today, Sixmile Creek Mine is open to recreational miners throughout the year. You can pan for gold at any time of the years provided that you use manual tools such as sluice boxes or rocker boxes. If you intended to use smaller suction dredges of four inches or smaller nozzle then you are only allowed to so between May and June each year but you will still need to get an official permission from the Department of Fish and Game Division of Habitat in Anchorage. Digging stream banks is not allowed.

This is another great place where you can mine for gold in the Anchorage area. The Petersville Recreational Mining area is a government land set aside by the state of Alaska for people to pan and mine gold. Lots of people have been mining gold here for many years and quite a number have reported some amazing finds.

The area is managed by the Department of Natural Resources. The miners are expected to mine, prospect or pan for gold using light equipment such as metal detectors

, pans, backpack power, pick and shovel and earth auger among others. If you want to use suction dredging then you have to get permission from the department of Fish and Game Division of Habitat.

And: Historic Mining in the Heart of Juneau

Gold was discovered in the Bertha Creek Mining Area in the 1890s by a miner who named it after his daughter. Mining started immediately using simple sluice boxes before hydraulic mining was introduced in 1902. The mine produced thousands of ounces of gold before mining was closed down.

Today the Bertha Creek is used for recreational gold mining. The most productive area is the region between the Powerline crossing and the Granite Creek upstream. The nearby Tincan, Lyon, and Spokane creeks are also available for gold panning.

Next: Alaska’s Mining Country: The Land of Big Gold!