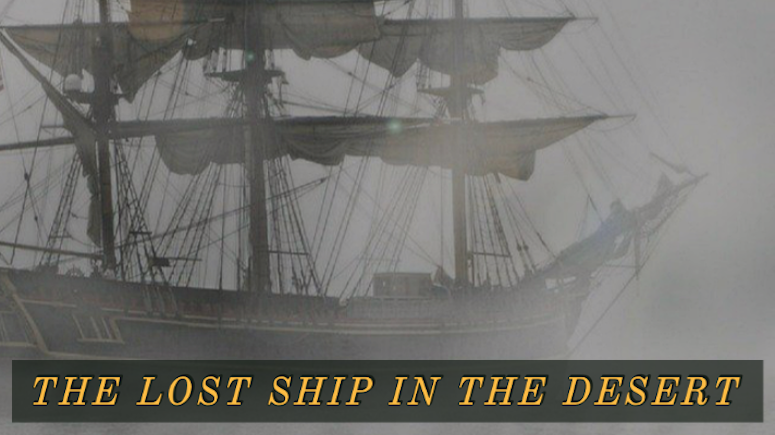 Sometimes reality sounds more bizarre than fiction. The tale of a large sailing vessel brimming with gold, pearls, and all kinds of riches submerged under the dry sands of the Salton Sea basin in California still mystifies people.

A large ship stranded hundreds of miles inland from the Gulf of California and Pacific Sea can appear far-fetched to some. But, for several centuries, the legend of the lost ship has been talked about by Native Americans, prospectors, Spanish explorers, and migrants.

How Did the Ship Reach Hundreds of Miles Inland?

Nobody quite knows what happened, but several theories were sounded from various quarters:

According to some, a strong flood created by the colliding of large tidal waves from the Gulf of California with the incoming heavy runoff from Colorado River delta must have pushed the ship, which was on its way to the Salton Sea, over the natural dam and into the desert. The floodwaters must have then rapidly drained, preventing the ship from returning to its course.

This theory may not be as improbable as it sounds. We know that these three facts:

If this theory is to be believed, the stranded ship was most likely a Spanish vessel. That said, there are other possibilities as well. It could be a pirate ship, stranded ship from the Indian Ocean, the 10 lost tribes from Israel, or the King Solomon’s Navy.

From the pages of ‘The Journey of the Flame’ by Antonio de Fierro Blanco, an alternative theory emerged. According to the book, in 1615, Iturbe – a Spaniard – sailed to the Salton Sea through natural channels. He was hoping to find the semi-mythical Strait of Anian, which he believed connected the Pacific to the Atlantic.

He searched in vain and after three months decided to return to the Pacific through the same natural channel. But, he found the route blocked, and the ocean inaccessible, due to a mudslide.

Some hypothesize; Iturbe abandoned the ship because the water level of the Salton Sea dropped way down. The sailor had no choice but to walk away, leaving the ship standing with tons of pearls, gold, and other valuables.

The First Sighting of the Lost Ship

The book also details the first sighing of the 50-ton treasure ship after a century. According to the author, the ship was found by Tiburcio Manquerna, a mule driver. He was a companion of Juan Baptista de Anza.

The mule driver was sent to find a route to the ocean. He traveled during the night to avoid the heat of the day. He claimed to have stumbled upon a wooden structure that resembled a ship. Inside he found an unimaginable wealth of all kinds, especially pearls. The opium of wealth forced Manquerna to abandon his companions.

He took as much as he could and rode towards the ocean on his mule. He starved for days, later fed by the Indians; he also climbed the western mountains on foot. After much hardship, Manquerna finally reached San Luis Rey Mission. Later, his many attempts to search the treasure ship failed. Manquerna revealed his story at the Don Firmin Sanhudo’s camp, which was later told to the world.

An Expedition to Find the Treasure of the Salton Sea

On November 12, 1870, the Los Angeles Star carried the story of a treasure hunter who went in search of the lost ship. Charley Clusker and his team focused on Dos Palmas. After three to four weeks into their expedition, a wrong turn took the party some 15 miles away from Dos Palmas. Their first attempt got them nowhere.

But Charley Clusker claimed that his information, which he got from the Indians, was credible. The news report quoted Clusker saying they are well prepared for the next expedition that would commence soon.

A couple of weeks later, on December 1, the Los Angeles Star published another story claiming Charley Clusker and his team returned from the search the day before. The report stated that the search party had a rough time but eventually their mission was a success. After describing the Spanish ship, Clusker informed them he would set out again to claim his treasure, but he was never heard from again.

The lost ship of the Salton Sea cannot be dismissed as a myth too quickly. There are too many similarities in the stories and descriptions of the ship. If the story is true, then the treasure ship is still buried somewhere in the desert waiting to be discovered.

Perhaps one of these fine days after a combination of strong winds and shifting sands, a carved hull or a mast of a Spanish galleon filled with treasure will emerge from the desert.

Next: Gold, Minerals & Treasures of the Grand Canyon