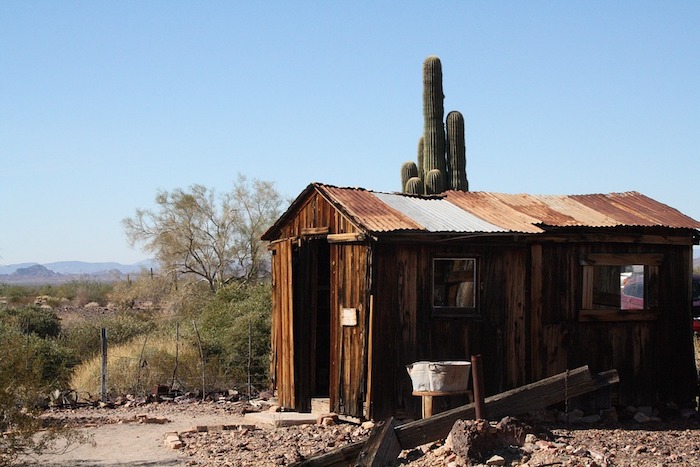 Castle Dome was one of Yuma’s most productive mining sites, and remains a popular area for gold prospectors to explore.

Located in the along the Colorado River in the Castle Dome Mountains, the town was established following the discovery of silver ore in the area, it turned out that the area was had richer in lead ore than silver. The district produced large quantities lead, copper, zinc, and gold. The Castle Dome district played an important role in supplying most of the lead needed for the First and the Second World War.

The first American miners reached Castle Dome Mountains in 1863 but already there were signs of mining activity left behind by the natives. It is believed that Native Americans probably mined the mountains for several centuries prior, often carrying the ore they mined to their processing site on Gila River which had lost of adobe furnace remnants.

Of course the real interest in this area began when white settlers discovered gold and silver in the Yuma area. Many miners set up mining claims along the Colorado River. Placers were present along the river, although most of the gold was very fine and difficult to recover.

Soon it was discovered that the area had rich silver deposits and more miners came in looking to stake silver mine claims. Towards the end of 1963, Jacob and Conner Snively established the Castle Dome Mining Company and raised funds to buy several of the silver and gold claims in the region around the Colorado River.

They then established the Castle Dome landing along the river as the shipping site for the ore that they mined in the claims they had bought. This provided much needed infrastructure that attracted even more interest to the area. 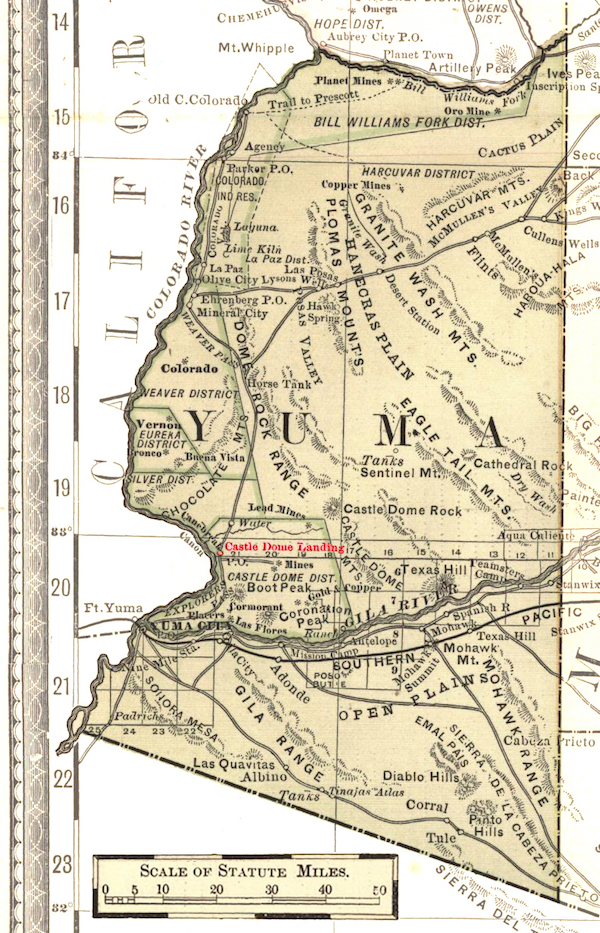 At first, the Castle Dome Mining Company concentrated on mining silver which looked more profitable at the time. An independent mining engineer named William Blake discovered that the area had richer lead-copper ore than silver and planned to have investors establish lead production operations in the area. This changed the direction of the mining activities in the area.

From Mining Camp to Boomtown

Although mining activities had begun in 1863 in the Castle Dome area, the hostilities exhibited by the natives kept the mining operations to a minimum. It was not until 1869 that full-fledged mining began in the area. This brought in more miners and soon a small mining camp known as Pitoti was formed to serve the needs of the miners. The mining camp was renamed Castle Dome in 1875 following the establishment of a post office in the town.

The original site of the Castle dome mining town soon went into decline as most of the miners moved close to the original Castle Dome Landing directly on the Colorado River. The Castle Dome landing was the main transport site for the ore mined in the nearby mines and was the main supply point for the region. This offered more prospects for the miners than the original Castle dome campsite which was a few miles from the river.

As the Castle Dome landing thrived the post office was moved to the new town in 1878. Several other businesses were established in the town and the population slowly grew to reach a peak of over 3000 people in 1880. At its peak, the town had a post office, several hotels, saloons, general stores and a number of mills and smelters.

Lead production began to decline in the early 1880s due to the exhaustion of the ore. This led to the decline in the population as many of the miners moved on in the search for greener pastures elsewhere. The post office was eventually closed down in 1884.

While this could have been an end of mining in the areas, this wasn’t the case. In the mid-1890s lead mining was reopened, and when World War I begun it became an important lead supplier for the war efforts.

The Arizona Lead Company took over the mines in 1843 increasing production significantly to meet the growing demands during the Second World War.

After the Second World War, the demand for lead declined. This forced the company to close a number of its mines. The town began to decline again as miners lost their jobs and many left the town. Mining continued on small scale in the area as the mining shifted towards the production of silver until 1978 when the last mine was shut down for the last time. 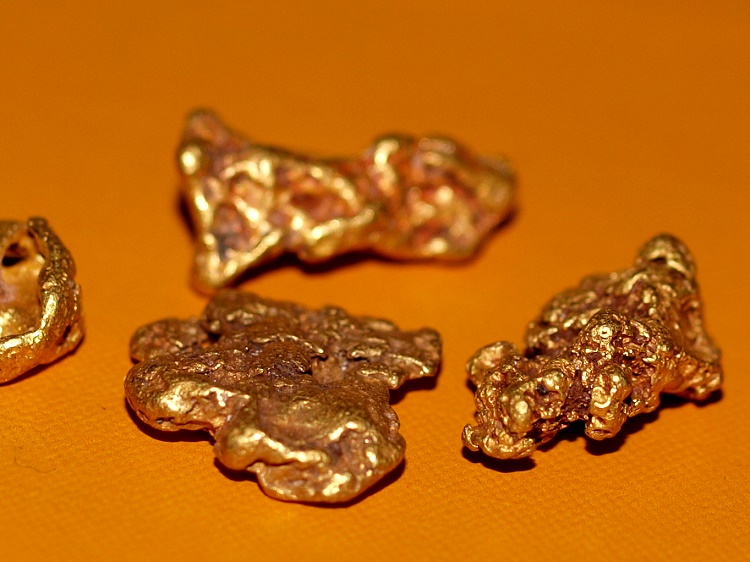 Most of what remained of the Castle Dome Landing is now submerged under Martinez Lake which was created by the construction of the Imperial Dam on the Colorado River. The original Castle Dome mining camp was bought by private owners and in 1994 and turned into the historical Castle Dome Museum.

The museum is made up of seven original structures and about 50 recreated ones.

Prospecting is still a popular activity in the desert around Yuma and Castle Dome. While most of the major mines in this area were focused on lead and silver production, there is also gold to be found in the desert washes.

There is still plenty of gold in the Colorado River also. Of course, just as it was when the first miners arrived, most of the gold is very fine. It takes a lot of effort to recover even small amounts of gold from the river. Time is usually better spent looking for deposits in the desert.

Next: Gold Mining in the San Gabriel Mountains