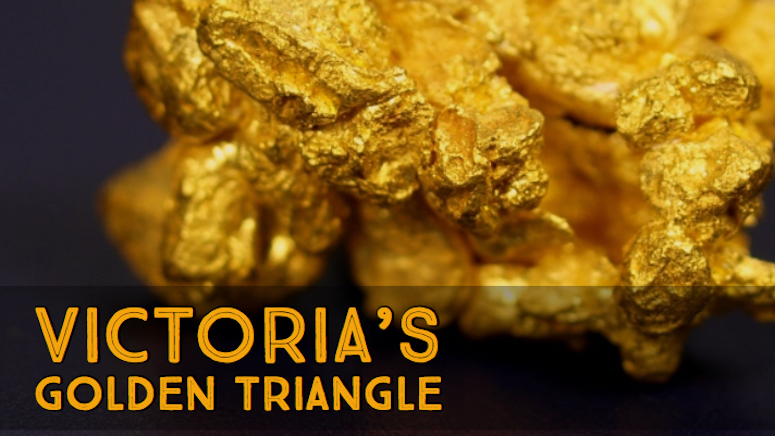 Except for the richer and more extensive gold-bearing fields of California, the gold production in the State of Victoria was once greater than in any other country in the world. The state’s greatest yield within a single year occurred in 1856; where a documented recovery of 3,053,744 troy ounces of gold was achieved.

While traces of gold were earlier found during the 1840s, particularly in the Port Philip area, and its later discoveries at Warrandyte, Clunes and Buninyong in 1851, the intensive gold rushes really started near Ballarat, at Golden Point, including the significant gold finds in Bendigo and Beechworth.

At the height of its gold production, Victoria channeled an average of two tons of gold weekly into the Treasury Building in Melbourne. The exported gold to Britain during the 1850s greatly compensated Victoria’s entire foreign debts and eventually laid the foundation of the state’s large commercial expansion towards the latter half of the century.

Originally, the first discovery of gold in Victoria was made by the Hon. W. Campbell, when he found several small pieces of native gold in quartz at Clunes, in March of 1850. However, the discovery was kept secret and only became official when Campbell revealed the find on January 10, 1851. Specimens were shown to analyst and physician, Dr. George H. Bruhn midst his exploration of the mineral resources of the colony. He then confirmed the authenticity of gold and indications of the precious metal in quartz from what was later known as the celebrated Clune Diggings.

As the initial gold find turned out to be uneconomic to market, discoveries around the area were intensified and pushed by the government with corresponding rewards. Soon, Mr. James Esmond came across the first profitable goldfield in Victoria at Creswick’s Creek, a tributary of the Loddon River, in Clunes in July of 1851.

Four days later, reports of the existence of gold in the quartz rocks of Anderson’s Creek, a tributary of the Yarra River near Warrandyte, surfaced after it was found by Mr. Louis John Michel and his party. Almost simultaneously, another occurrence of gold was found at the Pyrenees Mountains, again by Mr. Esmond. And not too long after, the numerous goldfields near Mount Alexander were found. The third discovery was made by Mr. Thomas Hiscock, who found a deposit in the gully of the Buninyong Ranges on August 8, 1851.

On July of 1851, Thomas Peters discovered specks of gold at what is now known as Specimen Gully. The discovery triggered a rush to the Mount Alexander area. In November of the same year, gold was found at Forest Creek centered on present-day Castlemaine. It marked the beginning of the largest of all Victorian gold discoveries and claimed as the richest shallow alluvial goldfield in the world. By December, further discoveries followed, with even more gold found in the area now known as Bendigo.

Within just a few decades, Victoria transformed from a small pastoral settlement to a wealthy and proud colony as goldfields sprouted and stretched from Ararat and Stawell in the western districts to Beechworth, Daylesford and Ovens River to the northwest in 1852; Bright, Omeo, and Avoca towards the mountainous regions during 1858–59; and, Walhalla in 1863. However, these discoveries were soon surpassed by the Ballarat and Bendigo finds.

In November 1906, a remarkable discovery of gold was made near Tarnagulla, where a miner who had patiently prospected the area for a long time recovered seven ounces of gold from a shaft nineteen feet deep, including some fairly large nuggets. This find sparked the so-called Poseidon rush. The final principal gold rush in Victoria occurred at Berringa, south of Ballarat, during the first decade of the 20th century. Still, gold has continued to be found in recent years with the latest discovery at Wedderburn in 1980.

Eventually gold mining slowed in Victoria. It was largely due in part with the high costs of pumping and mining in greater depths, but not because the goldfields have been exhausted completely.

The recent increase in gold prices has seen a resurgence of commercial gold mining with operations resuming in the major fields of Ballarat and Bendigo. Further explorations is also underway elsewhere, like in the isolated mountain area of Glen Wills near Mitta Mitta in the northeastern region.

Small-scale gold miners are still out finding gold with metal detectors throughout Victoria. 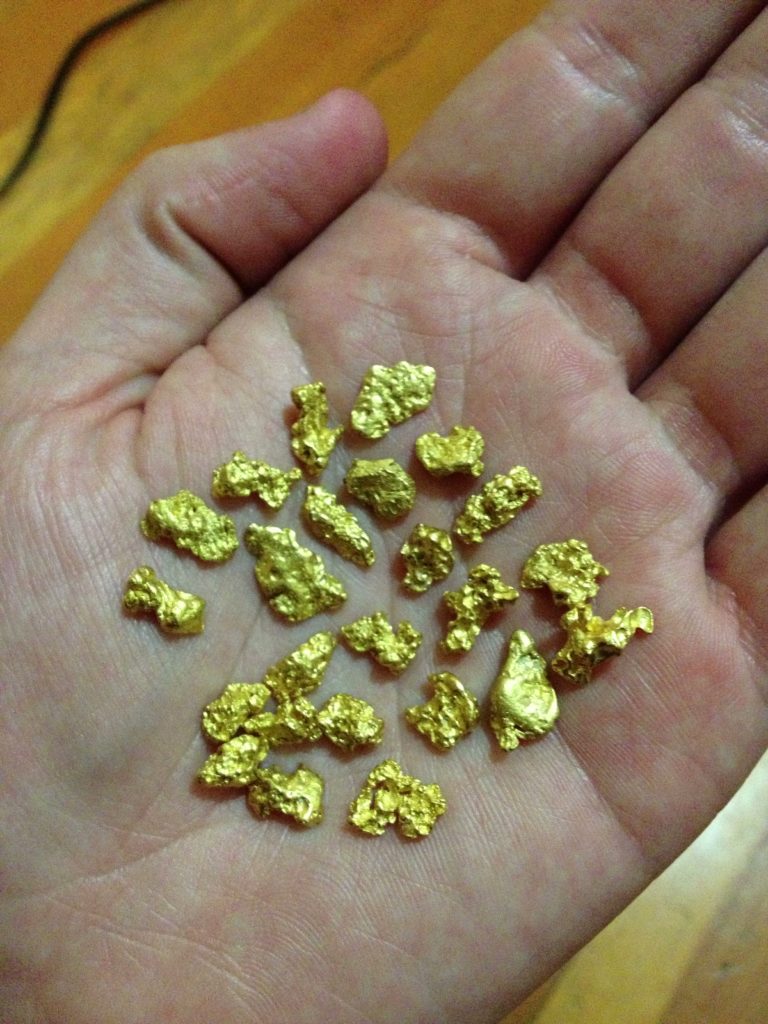 Gold has been recovered over a very large section of Victoria, with the most prolific producers located in the central western region— Bendigo-Ballarat-Stawell Districts; in the east— Walhalla-Wood’s Point Districts; and, in the northeast— Beechworth District. Each of these goldfields is particularly attributed to specific districts, which were practically based on geological and geographical features and characteristics. The following areas are where the major gold finds occurred in Victoria.

These principal gold-bearing areas are found to the northwest of Melbourne, with the fields running generally towards a north-to-south trend. The rich area bordered by Ballarat, Wedderburn and Bendigo is recognized as the richest alluvial gold-bearing area in the world and is widely referred to as “The Golden Triangle”.

Victoria’s Golden Triangle region is word-famous for the large sizes, purity, and quantities of gold nuggets found within the area. It continues to yield significant finds even at the present times, and it is perhaps, one of the better known Victorian gold-bearing areas frequented by prospectors with modern gold metal detectors.

The region, encompassing an area of 9,400 sq km, nestles on the northernmost portion of the Greater Central Goldfields region. The base line of the triangle begins at the township of Avoca marking the South West point, and then treads a line to Castlemaine City, which marks the South East point, and with both sides of the triangle meeting at the apex in Wedderburn Town to the north.

The Welcome Stranger Nugget is the largest solid gold nugget found in on Earth. It was dug up near the town of Dunolly in Victoria, Australia back in 1869.

32 of the 40 largest gold nuggets found in Australia have been found in Central Victoria. Several of the nuggets were unearthed within a few inches of the surface. The shallow ground are generally worked out, but operations have given satisfactory results in the deeper alluvial. And metal detectors

These finds included the world’s largest recorded nugget, “The Welcome Stranger”, found just a few centimeters below the surface at Moliagul near Dunolly, in 1869. It had a total weight of 2,284 troy ounces. Another large nugget was the “Welcome” nugget, which was recovered in Sovereign Hill in 1858 near Ballarat, Victoria. It contained 2,217 troy ounces of gold. In addition, the “Hand of Faith” nugget was the largest gold nugget discovered with the use of a metal detector near Kingower in 1980. It was also the largest gold nugget still in its original form and weighed 875 ounces.

Other notable nuggets were the “Viscount of Canterbury”, which weighed 1,121 troy ounces and found on the Berlin goldfield near Rehola. The “Kum Tow” with a weight 795 troy ounces was also found on the Berlin goldfield. At the Poseidon Lead near Tarnagulla, it produced “The Poseidon”, weighing 953 troy ounces, and Leila at 675 troy ounces.
There have also been several other gold nuggets well in excess of 100 troy ounces recovered throughout the years at many of the goldfields within The Golden Triangle. In fact, a couple of its goldfields— Kangderaar Diggings at Kingower, and the diggings between McIntyre and Tarnagulla— were dubbed “Potato Diggings” since the nuggets found were as numerous, and similar in size, to potatoes.

as a prospecting tool. As a result, several gold nuggets at various sizes have been recovered in more recent times.