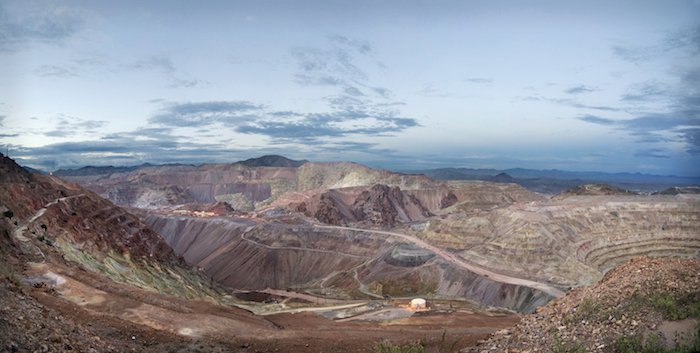 The Morenci Mine is located in eastern Arizona and is one of the largest copper reserves in the world. The mine is located along US Highway 191 near the small towns of Morenci and Clifton. It is about 10 miles from the southeastern edge of the San Carlos Indian Reservation. It is reported to contain over 3.2 billion tons of ore grading 0.16% copper.

Morenci has several operations, each with a unique task associated with the recovery of copper. And while the copper has been known here for over 150 years, the mine is now recovering more ore than ever before.

History of the Mine

In 1865 copper was first discovered in Morenci, the discovery turned out to be part of a huge vein of copper spanning a whole mountain. The Detroit Copper Company started the Morenci mine 7 years later in 1872 and operated it until Copper Queen Mining bought the property in 1885. (Copper Queen Mining later changed its name to Phelps Dodge in 1917.)

For many years, the mine operated as an integrated mine, concentrator, and smelter. It was a pioneer of large-scale hydro-metallurgical treatment of mined copper ore by dump leaching, solvent extraction and electro-winning in the 1980s.

They also employed more conventional copper or treatment in parallel. In 1999, prior to their acquisition, Phelps Dodge began a $220 million mine-for-leach conversion project and in 2001 started producing all of the copper from the mine in this way.

Next: Bisbee Mines – The Copper Queen Brings Thousands to Arizona

As of December 2015, recoverable proven and probable reserves of the mine stood at 3,574 million tons of ore! The purity of the ore averages around 0.27% Cu which may seem low, but with the huge volumes of ore being processed the result is lots of copper.

The mine has seen a significant increase in copper output in recent years. The mine produced 504 million pounds of copper in 2009 as compared to an output of 902 million pounds in 2015. This can be attributed to improvements in technology as well as an expansion project in 2014.

The Morenci Mine Production

In addition the Morenci Mine has several other operations such as; a concentrator that produces copper and molybdenum concentrate; a crushed-ore leach pad and stacking system; a low-grade run-of-mine leaching system; four solution extraction plants; three electrowinning tank houses that produce copper cathode and in 2014 a mill expansion to 115,000 metric tons per day was completed with an incremental annual copper production of 225 million pounds.

And: The Best Gold Mining in Arizona: A County-by-County Breakdown

The Role of the Mine in the local Economy

Well, when you decide to make a visit to Arizona, don’t miss an opportunity to visit the Morenci Mine as well. This has becomes one of the more interesting things for tourists to experience in the state, and it is a modern marvel whether you are interested in mining or not.

The growing importance of copper makes the mine an important player in the economy of Arizona. Copper from the mine is mainly used in the production of electrical wire (about 60% of worldwide copper production goes into this), roofing and plumbing (20%) and industrial machinery. It is often used as a pure metal due to its good conductivity and relatively low cost. It can, however, be alloyed to create more desirable properties such as greater machinability for complex parts or to create a harder metal for use.

It’s no surprise that a mine of this size has had quite a favorable impact on the local economy. The copper reserves are nowhere near depleted, so expect the Morenci Mine to operate well into the future.