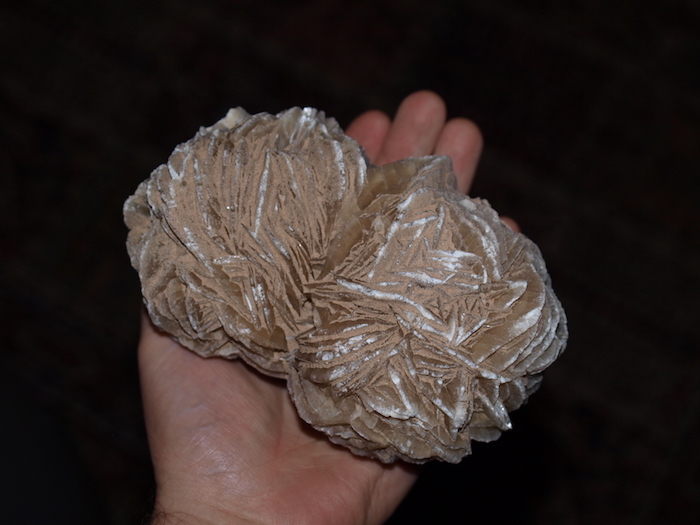 The beautiful mineral commonly referred to as the “desert rose” can be found scattered across much of the world.

In Africa, desert rose rock may be found in parts of Algeria, Tunisia, Morocco, Egypt, and Namibia.

In Asia, it occurs naturally in Saudi Arabia, Qatar and the United Arab Emirates.

In the Western Hemisphere, this mineral is found in portions of Mexico, as well as Arizona and Oklahoma in the United States.

FORMATION OF THE DESERT ROSE ROCKS

The desert rose rock typically begins as sand or salt which becomes surrounded by gypsum crystals which are most frequently hosted by selenite and barite. These crystals are initially formed by water concentration (Yes, water in the desert). Another frequent location of these crystals which once contained water is the bottom of salt basins.

This mass of crystal is then altered by the elements present around it, like wind erosion and sand. After these changes, the crystals are often flattened into shapes that look like rose petals. Desert rose often form in clusters, making them appear like bunches of flowers.

The typical desert rose is a small stone which ranges from 0.5 inches to 4 inches in diameter. The largest recorded desert rose stone was 17 inches across and 10 inches high, weighing in at a hefty 125 pounds.

We are talking about individual roses here… Clusters of desert roses have been recorded up to 39 inches tall and weighing more than 1,000 pounds! Intact pieces of this size are truly rare and highly valuable to collectors. 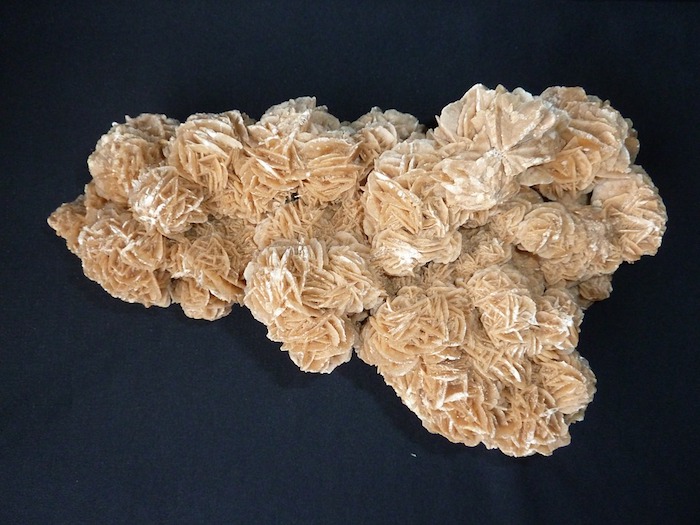 Desert roses can often grow together in clusters of immense size.

FROM WETLAND TO ARID DESERT

How, you might ask, does a rock formation which formed from water concentration find its way to the desert? Well, things do change over time. Desert Rose rock found today in Oklahoma was formed during the Permian Period, about 250 million years ago. Back then, parts of Oklahoma were covered by a shallow sea. As the sea retreated, baryte left by the disappearing water crystallized around grains of quartz sand. This stone left behind contains deposits of rose rock.

Other areas that are now desert around the world once received more precipitation than they do now. The great salt flats found in many deserts were also once under shallow seas. For example, the oil that can now be found in Saudi Arabia originally formed from plants that flourished a hundred million years ago. 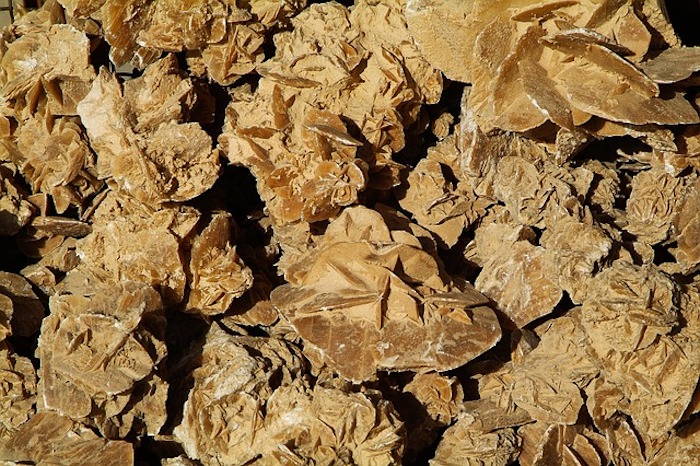 The desert rose has traditionally been prized for an assortment of alleged metaphysical powers. They have historically been used as a talisman for protection against or cures from a variety of physical ailments and psychological or emotional problems. Each of the rocks are said to contain its own spirit which supplies the powers which benefit people. Not surprisingly, like many objects which are believed to possess supernatural powers, the desert rose has been used by shamans and witches throughout history.

The desert rose is believed to have a number of physical benefits, ranging from both minor aids to life saving properties. Some of the comparatively minor physical gifts it is said to bring include improved muscle flexibility, improved elasticity of skin, and helping heal certain viral infections.

Somewhat more impressive powers attributed to these rocks curing backaches, ulcers, psoriasis, and, depending on your priorities, improved sex drive and fertility. A truly impressive physical benefit allegedly attributed to the desert rose is treatment for prostate cancer.

Some of the emotional and psychological difficulties it is supposed to aid are improved confidence, mental focus, and psychic abilities. It supposedly provides greater motivation, self-worth and confidence.

The desert rose stone has also been a favorite of shamans or witches over time. Each desert rose is said to have its own spirit guardian. It is also said to improve your dreams and recall of previous lives.