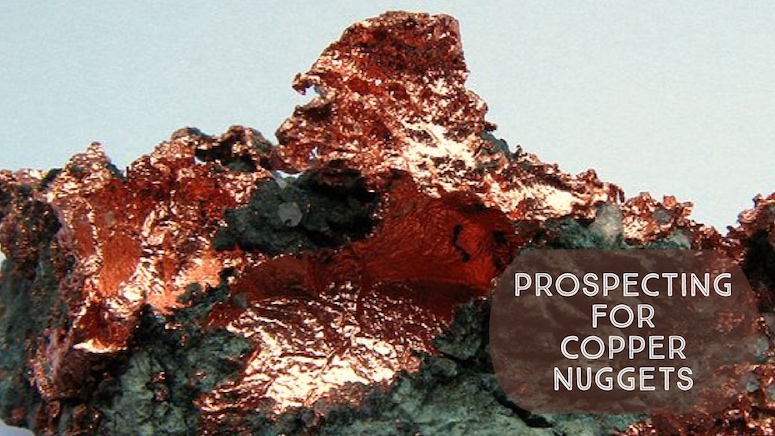 I was at the Quartzsite Mineral Show this past winter and met a guy that was selling hundreds of natural copper nuggets and specimens. Most of the pieces ranged from a few ounces up to several pounds. He was getting a handsome price for them too, and they were clearly selling quite well.

Honestly I had never really thought about prospecting for copper. There are copper nuggets in many locations throughout the West, but comparing the price of gold to copper, it seemed like a no-brainer on which I should focus on.

However, this fella was from Michigan, and except for a few locations, they don’t really have much gold there. Copper on the other hand is abundant. If you are from a region that produces a lot of large copper nuggets, this might be something you should consider metal detecting for.

The Formation of Copper on Earth

Geologists estimate that the metallic copper formed more than one billion years ago. Using 4.5 billion years as a guess for Earth’s formation as a planet, that was quite a long time ago.
At the time when copper first formed, the earth was still forming its crustal land masses and massive amounts of basalt was still emerging from the mantle and spreading over large areas of the earth. Most of this copper would merge with other rocks into ore.

Over the following eons of time, ice ages occurred in the northern hemisphere and the ice advances and withdrawals removed thousands of feet of covering sediments from on top of the buried basalt flows.

Approximately 12,000 years ago, at the end of the latest major Ice Age, the last great ice sheet covering North America melted back to the north and left behind huge amounts of earth, rocks and assorted debris. Included in these piles were large formations of copper nuggets the ice had scraped from the surface.

People often refer to the “float weight” of copper or refer to nuggets as “float copper.” Float copper is a geologic term that refers to copper that has been moved by glaciers over millions of years and deposited in a new location that may be hundreds of miles away from where it started. This is the same process that deposited glacial gold all throughout the Midwest. 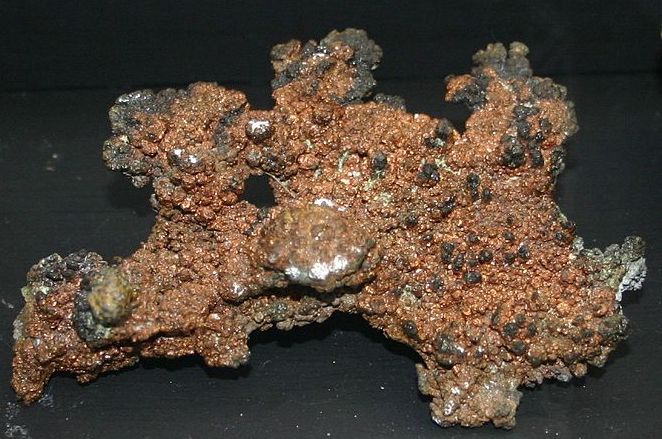 Copper is only worth about $3 per pound, but natural specimens are worth considerably more than that. Collectors pay a premium for nice nuggets and specimens that is not based on the “melt value” of the copper. Individual specimens with nice crystalline shapes can bring hundreds or even thousands of dollars per pound!

Most copper that the average prospector would find is some sort of float copper, and contained in types of ore. “Native” copper, which consists of lumps of copper metal that managed to stay in place is very rare. Although copper ore can be found in many parts of the world, a significant amount of native copper is found in Michigan and Minnesota.

Although copper can be found in much of the world, currently the largest copper producer is Chile, followed by the United States, Russia, Canada and China.

The traditional method used at most mines involves the ore being broken and brought to the surface for crushing. The ore is then ground finely before the copper-bearing minerals are concentrated by a flotation process which separates the grains of ore mineral from the waste material, or gangue.

Early Use of Copper Nuggets

Copper is a comparatively soft metal and is easy to work with. Not surprisingly, it was one of the first metals used. There has been evidence of copper use as long as 10,000 years ago. A copper pendant from about 8700 B.C. was found in what is now northern Iraq. There is evidence that by about 6400 B.C. copper was being melted and cast into objects in the area now known as Turkey.

The Largest Ever Copper Nugget

Copper nuggets can come in a wide variety of sizes. The largest copper nugget ever found, or at least the largest that remained in one piece, was recovered in 1997 near the Quincy Mine in Michigan. The float weight of this copper nugget is estimated at 28.2 tons!

After Ryndholm’s death, they transported the nugget to Presque Isle Park in Marquette, MI to raise awareness of the nugget and help raise the cash to purchase it outright and place it on permanent display.

However, when the Society was unable to raise the funds needed to purchase the nugget during the four-year time limit on the contract of sale, the copper was returned to its original owners at the Quincy Mine. In early 2016, the Quincy Mine sold this copper nugget to Collector’s Edge Minerals, located in Golden, Colorado.

Although most float copper usually ended its journey tens of thousands of years ago, the world’s largest nugget continued to float (in this case, literally aboard a ship) until it made its way to the pavilion hall of the Chenzou Mineral and Gem Show in China in 2016.

The method that seems to work best for finding copper nuggets is to metal detect in known copper mining areas. Of course, it is best to do your research and make sure that you are in an area that is known to produce nuggets.

Since most copper mines are extracting microscopic bits of copper from hard rock ores, just being in a copper region does not necessarily mean you are going to find a solid nugget.

Once you have located a known nugget producing area, scan your metal detector and dig those big sounds! It is best to ignore the smaller targets if you are hunting for trophy specimens. Ignoring pull tabs and smaller targets and focus on the “big” sounds. Using a detector with quality discrimination can help, but keep in mind that those big targets can effect the accuracy of discriminators. When in doubt, dig it!

Next: Discovery of a Lifetime – A Record-Breaking Silver Nugget Found!