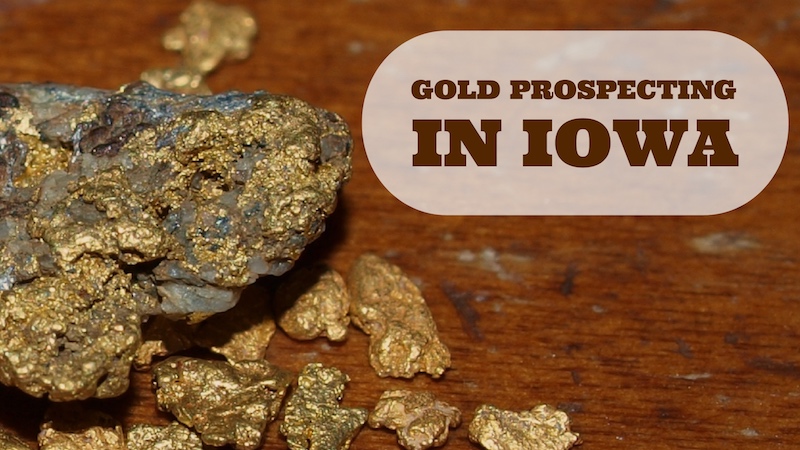 All the gold that existed in Iowa was believed to be glacial gold. Glaciers once covered the entire state.

Geologists note that these glaciers advanced and receded over the Midwest several times over the past thousands of years, each time carrying gold-bearing gravels from Manitoba and Ontario in Canada. As the glaciers gradually receded, these gravels were scattered throughout and left behind the gold that is still present today.

Like other glacial deposits existing across the Midwest, Gold found here is extremely fine, and it is important to work carefully in order to retain these fine gold particles. While the gold concentrations within the state do not attract interest of gold mining on a large commercial scale, there is an active and engaged group of prospectors exploring the state in search of gold.

Where You Can Find Gold in Iowa

The first gold discovery in Iowa was in Hardin County. Shortly after the organization of the county in the spring of 1853, an innkeeper named John Ellsworth shared the information to a faithful few that he had discovered gold upon his farm, which was located within a short distance south of the county seat of Eldora City.

The discovery was Iowa’s own mini gold rush. Miners flocked to the area as quick as they have abandoned it upon finding out that the quantities and mining operation were not profitably viable.

Keep in mind that “paying quantities” was different than it is today (with a price around $20 per ounce vs. over $1000 per ounce today.) Still, even today the gold here is not generally considered profitable to work.

In northeast Davis County, gold can be found in the alluvial deposits along the Vasser Creek according to a 1999 Iowa Geological Survey.

In Fayette County, the 80-mile long Volga River and its minor tributaries near the county seat of West Union City have some occurrences of fine gold.

The Volga River is the major tributary of the Turkey River, which covers several counties in northeastern Iowa, and where gold can be also found along its course. Also, glacial gold was found in Brush Creek in the towns of Taylorville or Arlington.

Big gold nuggets do exist in Iowa, but they are exceptionally rare. The glaciers that transported gold down from Canada pulverized them. In most cases all that is left is extra fine gold dust.

In Lee County near the city of Keokuk, the Des Moines River, which forms a short portion of Iowa’s border with Missouri, contained gold in the gravels and sand layers of its banks. The river is the largest watercourse flowing across the state of Iowa; it rises in the southern part of Minnesota, and flows across Iowa from northwest to southeast, passing from the glaciated plains and into the hills near Des Moines.

In Marshall County, flour gold has been found in Iowa River near Steamboat Rock City, northwest of the county seat of Marshalltown. Also, gold can be found in the river northwest of Le Grand City at the Three Bridges County Recreation area, immediately west of the old closed off 1880s bridge located in the center of the park.

There are many prospectors who have successfully recovered flour gold while searching the yellow metal in the sandbars of the Iowa River, especially when the river levels have receded. This fine textured gold found is not always deep in the gravels though. Sometimes, it is found in the top inch or just a couple of inches in the river bed material. In addition, the darker colored sands generally have the best concentrations of fine gold.