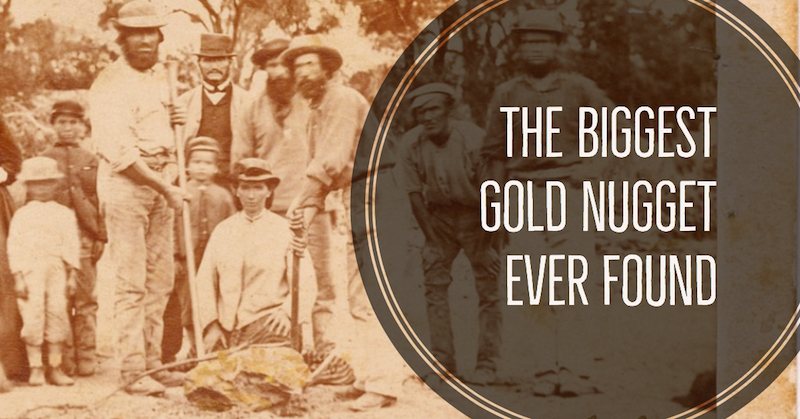 By far, the world’s largest gold specimen was correctly known as “The Beyers and Holtermann Nugget“. This was found in Australia during 1872. But despite its name, this was not actually a “nugget” as it was not one single piece of gold. Pieces of gold in the Holtermann find are separated by quartz rock, which essentially subdivides the gold into a number of pieces. The largest true nugget became known as the “Welcome Stranger” nugget.

Like many gold miners, James Deason and Richard Oates found only modest success after working for many years. Then, some incredible good fortune struck. During February 1869 in Victoria, Australia (It seems that a number of the largest nuggets came from Down Under) John Deason stumbled upon this huge gold nugget.

The Discovery of the World’s Largest Gold Nugget

“Stumbled upon” was a very accurate description of the find. As the story goes, Deason was searching for gold near a tree root when his pick struck something hard. After bending down to look for the obstacle he thought was in his way, he realized it was a huge gold nugget. As well as being incredibly lucky, Deason was certainly no fool. As soon as darkness fell, he sent for his partner Richard Oates and they began digging their amazing find out of the ground.

Not only was the Welcome Stranger found by accident, it was certainly not a difficult excavation. When the story of how such a huge gold nugget was discovered, you might expect to hear of difficult and exciting adventures. The Welcome Stranger Nugget was found after digging down three whole centimeters.

Melted as Quickly as it was Found

Alas, like most of the other largest gold nuggets, Welcome Stranger did not survive long as a single piece. Most of the largest gold nuggets ever recovered were broken for one reason or another. Sometimes it was too difficult for the nugget to be brought to the surface or transported. Just as it was found just centimeters below the surface, the Welcome Stranger met its demise for an incredibly pedestrian reason.

Once the nugget was unearthed, the miners naturally wanted to weigh it. Unsurprisingly, there was no scale available large enough to handle the Welcome Stranger, so it was broken into three pieces. After being weighed, the pieces were melted into ingots which were then shipped to the Bank of England. Like almost all gold, the pieces were likely melted and recast a number of times over the century and a half since being discovered. So, the gold from Welcome Stranger still exists in many different places, but nobody knows where.

The nugget’s pieces together weighed an amazing 2,520 troy ounces gross – that is about 200 pounds for those of you scoring at home – and 2,284 troy ounces trimmed. A replica of the Welcome Stranger nugget can be seen at the City Museum of Melbourne, Australia. There is also now a small obelisk in Bulldog Gully, where the Welcome Stranger was unearthed back in 1869.

John Deason continued with gold mining and workings most of his life, but like so many prospectors his good luck had its limits. He lost a substantial proportion of his wealth through poor investments in gold mining. Richard Oates had a more conventional future. After finding the Welcome Stranger he returned to his native UK and married. Oates later returned to Australia with his wife and purchased a farm which he worked for the remainder of his life.

Next: The Famous “Golden Eagle” Nugget