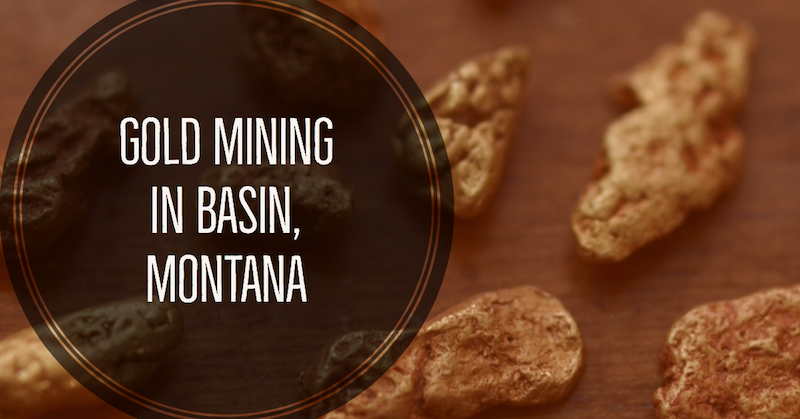 Gold was first discovered at nearby Helena at a place called Last Chance Gulch. This proved to be one of Montana’s richest gold discoveries, and it didn’t take long for thousands of hopeful miners to flood Western Montana in search of yellow metal.

The gold placers near Helena were rich, and expanded to the mountains around the town. Eventually, rich placers were also found in Basin Creek and the Boulder River. The first gold was reportedly found on Cataract Creek just south of present day Basin.

More miners flooded into the area, and the town of Basin, Montana was established. It started as a simple camp, but eventually grew to a booming gold town.

Placers were rich all throughout the area, but as with all mining areas, the gold in the creeks eventually plays out and becomes unprofitable to work.

By the 1870s, lode deposits were found in the area of Basin Creek and so two mines, Katy Mine and the Hope Mine were founded. More and more mines came into production. At its peak there were dozens of mines operating here.

Gold was plentiful and miners were happy. Gradually, the small mining camp was reconstructed into the town of Basin.

In 1894, the Mining Companies decided to expand the production and so the town got itself some stores, saloons, and brothels to meet the requirements of the growing population. 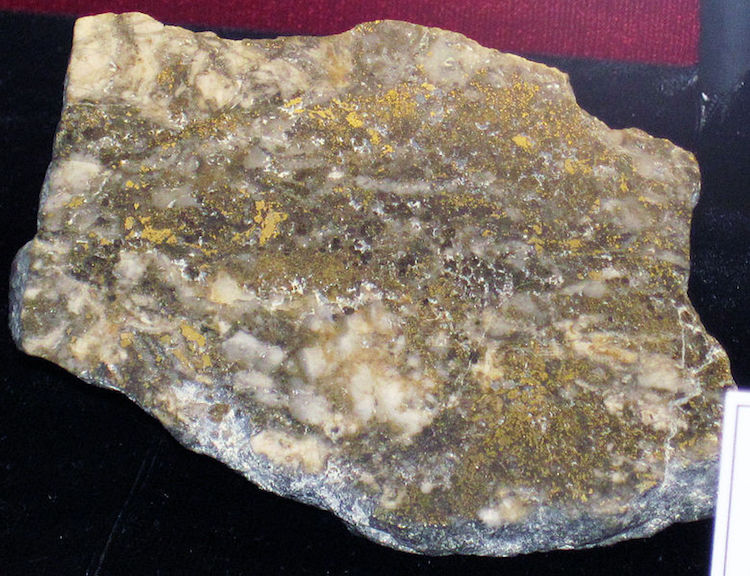 A beautiful piece of high-grade ore from the Jib Mine in the Basin Mining District. This piece is on display at the Mineral Museum in Butte. Photo courtesy of James St. John.

Flood, Fires, and Mine Closures

Then, a setback slowed the town growth. Due to a variety of factors that are all-too common with early mining camps, mainly flooding and the fires that destroyed much of the equipment, the mines closed for a time.

Efforts were made to work other mining districts close by for a time, and things were relatively idle during the turn of the century.

In 1905, the works in the Basin Creek Mines resumed. By then, the town had grown into a large-sized town with a 1,500 population and a large variety of hotels, stores, saloons, and even its own bank and a post-office. Between 1905 and 1910, a whole 2 railroads were built to ship the minerals and support the many mines in the area between Helena and Butte.

Basin did not collapse like most of the Gold Rush towns but it did become less popular with the depletion of minerals. In 1909, the richest gold ores started to run out, or, to be more precise, the gold that could be obtained by the technologies available then.

For a while, only zinc was mined here and the town became quite small, its post office and drugstore went. Then, it got a second boom for a while. In 1919, the Jib Consolidated Mining Company bought the claims for the mines and made the town the largest gold producer in the whole state.

It was, unfortunately, not for long. In 1925, the company split and its property was divided among the creditors so there was no one to oversee the production. Thus, the second boom ended leaving only small-scale mining in the region.

Many miners remained in the area however. In fact, the copper mines of Butte came to be known as perhaps the richest in the world. It came to be known as the “Richest Hill on Earth” and employed thousands of men. Even today, there is lots of mining activity in Butte and Anaconda.

Nowadays, Basin is mostly just a stop on the road between Helena and Butte. While it was a booming town during the peak of mining, there isn’t much today aside from a few hundred residents, most of whom are artists rather than miners. There are a few small mine operations here now, but the heyday of gold mining is definitely over. In fact, the area was designated as a Superfund Site in 1999 due the the large amount of contaminants and pollutants from the early mines.

Although the heyday of mining in Basin is long over, it is worth noting that prospectors can still find some good gold around the town. In fact, Basin and many other old mining camps in Western Montana will still produces some decent gold using traditional placer mining techniques.

Next: 7 Rivers in Montana that are Full of Gold!