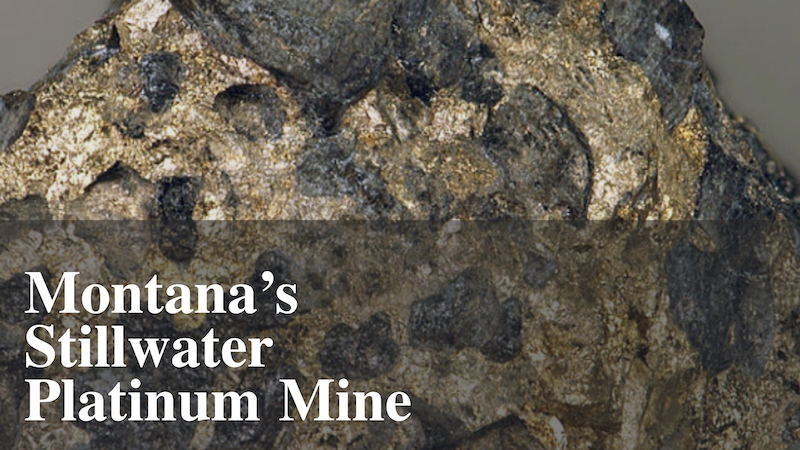 The Stillwater Platinum Mine is a mine specialized in the production of the group of minerals known as Platinum Group Metals (PGMs). The most well-known and valuable of these metals is the brilliant silvery metal known as platinum.

The mine is located in the Beartooth Mountains, which is about 100 miles southwest of Billings, Montana. Mining activity in this area has occurred since the mid-1800s, but large-scale development of this platinum mine is more recent.

Intensive explorations that led to the discovery of Platinum Group Metals (PGMs) occurred in 1967. A few years later in the early 1970s, geologists discovered a 28-by-4 mile strip of viable Platinum Group Metals deposits, which they later decided to name after their employer, and they called it J-M reef.

In the year 1986 Stillwater was opened for mining operations, but was officially dedicated on the 14th of August, 1987. Upon commissioning the mine, its operations have since been conducted near Nye, Montana and the East Boulder Mine that is located in the vicinity of Big Timber, Montana. And the two mines are extracting minerals from the J-M reef.

The Major Platinum Producer in the USA

Stillwater Platinum mine has been known to be the major producer of platinum in the United States. The mine has been the main supplier of the resource used in making jewelry products and automobile catalytic converters.

The mine also runs the operations of a smelter and base metal refinery at Columbus, Montana. This is where further purification of the mined products is conducted to a rich filter cake. The rich filter cake is later shipped to other custom refiners for the final touches before it can be put on the market for selling.

The company is able to conduct recycles spent auto-catalyst material, a technique used to recover the minerals at the smelter and refinery in order to maximize the production of the platinum products.

The mine has been known to conduct its operations through adits and laterals driven from the Stillwater Valley side. Not only that, the mine also has internal decline and shaft. In addition, the mine operates using three major methods in its quest to extract the much needed platinum. The methods include mechanized captive cut-and-fill, ramp-and-fill using hydraulic jumbos and LHDs and sub-level stoping.

During the mining operations, declines parallel to the ore-body enable the operators to make entries into the stoping area using overhand methods. On the other hand, sub-levels are driven on lifts and drilled downwards. Then the LHDs are used to recover blasted ore from below, and stopes are paste backfilled.

Stillwater Platinum Mine was for a long time managed by the Stillwater Mining Company. This company has had a number of successes over the years. For instance, in 2002, following an investment of $370 million, the commercial production known as the East Builder Project was commenced about 15 miles west of Stillwater.

Later, in mid-2003, Norilsk Nickel, a Russian based Platinum Group Metals (PGMs) producer took a 50.8% shareholding in Stillwater Mining after signing a set of agreements.

In the year 2005 Stillwater Mining was able to produce 554,000 ounces of Platinum and Palladium, of which 126,000 ounces were platinum at a cost of $472 per ounce. Meanwhile, the average price that was received on sales stood at $467 per ounce.

Recently a South African Company known as Sibanye Gold Limited had proposed to take over operations of Stillwater Mine at a cost of $2.2 billion. And in April 2017 the Committee of Foreign Investments approved the proposal to hand over the operations, and the whole process was finalized in May the same year.

Platinum in the United States

The United States is generally not a very large contributor of platinum to the global economy. Many other countries have much richer PMG sources. The Stillwater Platinum Mine is a major exception to this.

Platinum is mined in a few other areas. There has been large mining efforts for platinum at Good News Bay, Alaska. Here, bucket line dredges have extracted millions of dollars from placer deposits.

Other platinum placers are known in Northern California among other areas. These are not particularly rich though, and efforts to mine them have not been particularly fruitful over the years.

Mining for platinum is very different than mining for gold and copper, and is rarely associated as a by-product of those mines. This is one reason that very little platinum is mined in the USA. The Stillwater Platinum Mine is a rare exception.

Next: Placer Platinum Nuggets – Where You Can Find Them