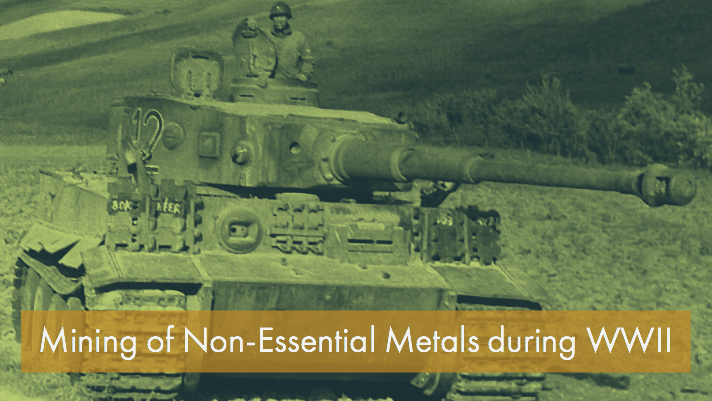 From the start of the Gold Rush all the way through the mid-1900s, much of the countries economy was sustained through mining activities. Of course one of the many important minerals mined was gold.

But not all days were rosy for the gold mining industries. There were many situations that challenged the profitability and even the existence of the mines. One of the occurrences that led to the closure of most gold mines was World War II. Let’s examine the reason for this, and the detrimental impact it had on the precious metal mining industry.

With the coming of the World War II when it got to the peak by 1942 a number of gold mines were completely shut down. One of the reasons gold mines were shut down included the fact the mines were regarded as ‘non-essential’ as they did not produce minerals that were of use to war.

As a result, the government put its focus on producing other metals such as copper, iron, among others in order to boost the production of equipment for the war. These were “essential metals,” important for the production of ships, tanks, airplanes and bullets.

Much Needed Labor for the War Effort

The government also shut down the gold mines to reduce the labor force in mines, and subsequently have increased labour force needed in mines that were involved in the production of metals that were regarded essential for war.

The gold mines were also made to cease their operations in order to have increased human resource in the military, as many were forced to join the military after jobs were lost in the mines.

Other reasons that led to the closure of mines for some years included the fact that the government wanted the gold mines to diversify their production to maximize the necessary minerals needed in the production of weapons for war. As a result, gold and silver ended up becoming the by-products of the essential minerals needed.

The shutting down of mines was also necessitated in order for the government to have increased capacity of equipment to work on the production of the equipment deemed fit for the war related ventures. As a result, the government controlled the purchase and acquisition of mining equipment, by restricting it to mines that produced what they were looking for in order to support war.

The gold mines were shutdown, as the government increased incentives for the miners who labored in mines that were supporting war to discourage those who worked in gold mines. As a result, there were few workers in the gold mines left.

Negative Impacts on the Industry

Due to the shutting down of most gold mines, there came with it the negative ripple effects in various places throughout the United States. One of the effects brought about was loss of employment in entire communities. Particularly in the Western U.S., there were entire towns that existed solely to cater the men who worked at the mines. Without the mines, many of them withered away.

The shutting down of several mines also led to low productivity in mines due to limited resources to boost the production, such as the mining machinery.

After the mines were shutdown, most of them caved and got flooded leading to the general disrepair. Most mines – especially the larger and deeper gold mines – required constant upkeep. Pumping was required to keep water out of the tunnels. Without upkeep they quickly flooded.

Furthermore, the maintenance of the gold mines which remained operational became expensive, as minimal profit was realized from the minerals. So, most of the infrastructure for the mines could no longer be used.

Reopening of the mines was a challenge. Because some business owners completely lost their capital after the Administrative Order was effected. It was a great challenge to bring back the mines that had been abandoned for several years.

On top of all that, many who were forced to join the military could not make it to the end of the war, as thousands of men got killed. As if that was not enough, some men killed in war left their families in despair, especially those who were regarded as bread-winners in their families.

Most Mines were Permanently Abandoned

Many more effects include the permanent closure of some mines, as many just could not be reopened even after the war. Even though the war only lasted a few short years, those years caused expensive damage to the mines.

Flooded and collapsed tunnels were the main problem, but also much of the equipment at the mines had been salvaged, repurposed or scrapped for steel. Rebuilding an abandoned mine was a huge undertaking, and it simply was not a profitable venture for many of the mines.

In conclusion, gold and silver mining suffered a great loss among all the mines that existed at the coming of the World War II. Besides the closure of mines, many lives of the employees that work in areas that supported the war were lost, since a good number of them joined the military.

Experts will still argue about the decision to close the non-essential mines. The decision certainly helped to increase the production of copper, iron, and other important metals. However, the aftermath of the decision had a major impact on the mining industry. In many ways it has never recovered. The gold and silver mining industry changed forever after the war.