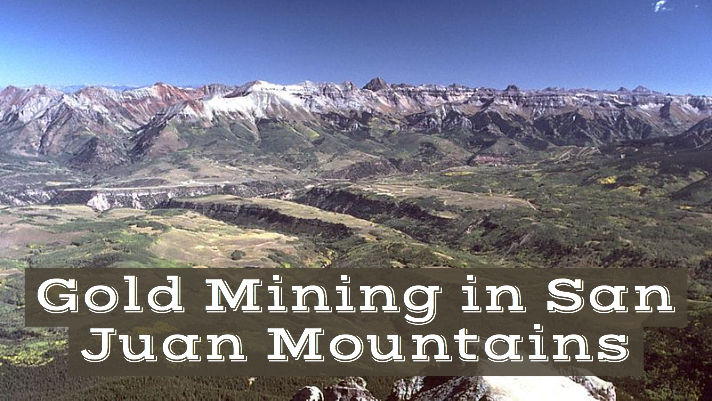 It is always fascinating to learn about how mining activities have evolved in various parts of the world. So is the case of San Juan Mountains area, a place known for gold and silver mining since the earliest settlers arrived in the region.

The San Juan Mountains are located in the southwestern region of Colorado. The mountains are known to have the largest coverage area in the region of Centennial State, while spreading over thirteen counties. Countless areas throughout these mountains have hidden gold and silver deposits.

Colorado began experiencing a gold rush from 1858 to 1859. Within just a few years, countless mineral deposits were being found throughout the Rocky Mountains. The rush to Pike’s Peak and many others would bring thousands of hopeful miners to these remote mountains.

It was in 1860 that a prospector by the name of Charles Baker visited the area in the western part of San Juan, and discovered some gold near present day Silverton.

After the discovery of gold by Baker, news spread to all the surrounding areas by 1861, and several men started arriving in San Juan for gold prospecting. However, the prospectors faced some challenges in the beginning, as they came by way of New Mexico and proceeded up the Animas River of Baker’s toll road, which had passed through the city of Animas.

Among the factors that made it a challenge for prospectors to settle was the resistance they faced from the native Ute Indians. Hostilities made it difficult to mine the area for several years. Additionally, the climatic conditions, elevation and isolation of the place made this region very difficult to explore and prospect.

Little activity occurred in the San Juan Mountains for several years until the end of the Civil War.

Also Read: 10 Rivers in Colorado Where You Can Find Gold

Conflicts with the Ute Indians

By 1865, interest grew and the prospecting activities in the San Juan Mountains resumed. John Moss became one of the early prospectors whose mining focus was directed on La Plata Canyon. He worked very hard and managed to secure a treaty with the Ute Indians, finally opening the areas up to mining on a larger scale.

The San Juan miners managed to negotiate working on the land that was about 3.5 million acres right in the heart of the San Juan with the help of the government who helped to sign the Brunot Agreement, which allowed the Utes to recover about $25,000 from the mining operations every year, as well as do the hunting on the land.

Violence kept arising between the whites and the Utes. But settlement areas continued to be established such as Silverton, Howardsville and Eureka. Efforts to improve the operations continued, and by mid to late 1870s smelters were operational in Silverton. By the year 1880 the railroad was underway and a new town Durango was surveyed. In 1882, the month of July the first train arrived in Silverton from Durango.

The coming of the railroad made the transportation of silver and gold easier, as this is where the smelter was also located for by-products such as copper, lead and zinc.

Also Read: 5 Places to go Gold Panning in Colorado without a Mining Claim

And: Public Gold Mine Tours in Colorado

Decline of Mining in the San Juan Mountains

The Panic of 1893 and the the Sherman Silver Act significantly reduced silver prices leading to the closure of most of the mines. Times were tough, and there were violent eruptions between mine owners and workers.

The San Juan’s are still known for its rich mining history. There are thousands of long forgotten mines and prospects scattered throughout the mountains. Placer miners can use gold pans and find small specks of gold in many of the creeks and rivers still today.

Next: A Huge 156-Ounce Gold Nugget Found in Colorado