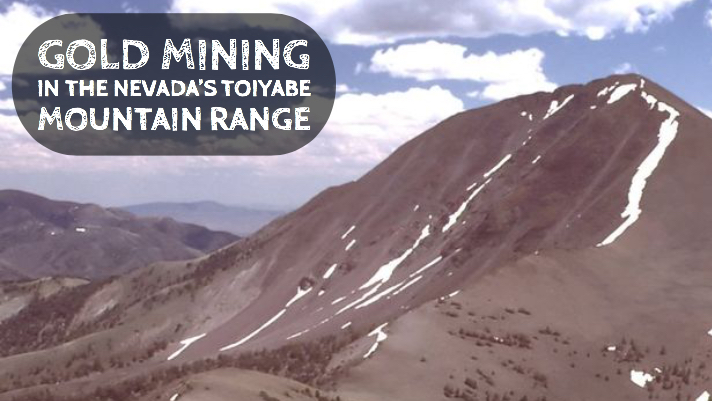 The Toiyabe Mountains of Central Nevada have been home to several mining towns over the years. Most of these towns were gone almost as quickly as the arrived. Others lasted for a while. It all depended on the richness of the minerals.

The largest of these mineral strikes was at the town of Berlin. Its mining story begun in May of 1863 when some prospectors discovered silver in nearby Union Canyon. This lead to the formation of Union Mining District. Small prospects were worked for several years before any major mining activity really got started.

The establishment of Berlin Mine came later in 1869. There was a purchase of the property and several mining claims in 1898 by a major mining company and ore production really ramped up. From that period up to 1908 the town was at its peak with gold and silver productions.

The booming production in the area brought a number of developments. Perhaps the most important infrastructure was the 30 stamp mill used to pulverize ores. Additionally, Berlin had an assay office, Union hall and a post office among many other businesses.

Apart from Berlin, other rich deposits were found at Park Canyon. The town equally has rich history where it concerns gold and silver mining in the area.

This area came to life in 1865 when the Buckeye Mine was constructed. It is this mine that formed the North Twin River Mining District with other mines in the area. The ore from here was transported to Austin before the mill was built in 1867.

The town was known to have had a lot of difficulties with the mining up through the 1890s. Mining activity was sporadic for years. Mining was resumed in 1905 and lasted up to 1916 when all operations were completely shut down for the last time.

The other town known for mining in the Toiyabe Mountain range include Ophir, now a ghost town. This became a mining town in 1863 when silver was first discovered in the region. It is located about 45 miles south of Austin.

With the passing of time, more discoveries were made leading to the establishment of big mills, as well as other developmental projects such as roads. Murphy mine was a top producer in Ophir Canyon. The mine put up a huge mill which had 20 stamps along with roasting furnaces, amalgamation pans, as and everything needed to extract the silver from the rich ores.

However, the Murphy mine could not continue operating for long due to financial challenges it encountered with other stakeholders. As a result, the property was sold in 1869 to Cambridge Silver Mining Company. But the works were not very active in the 1870s and the place became dormant for some time.

By 1880 mining operations resumed despite stopping again in the 1890s. Only minimal mining activities are reported to have continued into the twentieth century.

Alongside the towns mentioned above is Austin, which was born in 1860s when there was a discovery of silver ore in the area of Pony Canyon. Because of that discovery the news spread all over, and many more people started arriving. Among them was a man called David Buel who established Austin and named it after his own partner named Alvah Austin.

In no time, there was a rush in the area by the year 1862, which attracted the Legislators to establish Lander County in December that very year.

By the year 1863 the town of Austin was booming with many businessmen setting up their facilities in the area. As a result, it became the seat of Lander County. Numerous businesses were established in the town to supply the surrounding mines.

After some time Manhattan Silver Mining Company started taking over a number of mines and mills and continued with the production in 1865. But with the coming of new mineral discoveries in other areas, the labor force kept going down in Austin.

By the late 1860 and 1870s Austin was making profit, and by 1880 the narrow gauge had extended services to the town after the coming of a railroad in Clifton. But the mining operations kept going down until Manhattan Silver Mining Company was no longer operational by 1887.

Gold & Silver Mines of the Toiyabe

In a nutshell, the Toiyabe Mountains were very rich in minerals. There is still some mining activity going on in this areas, but many of the early mines now lay dormant and abandoned. This is a remote part of Nevada and the area doesn’t get a whole lot of activity today. Many of the early mining boomtowns in the Toiyabe Range area long gone.

The area still holds potential for future mining. There are large mining companies that still hold claim to some of the historic mining areas in this region. Perhaps an advance in silver prices might renew an interest in mining here.

The Toiyabe Mountains are one of the most beautiful and remote mountain ranges in the Silver State. Precious metals still remain hidden in these big mountains.