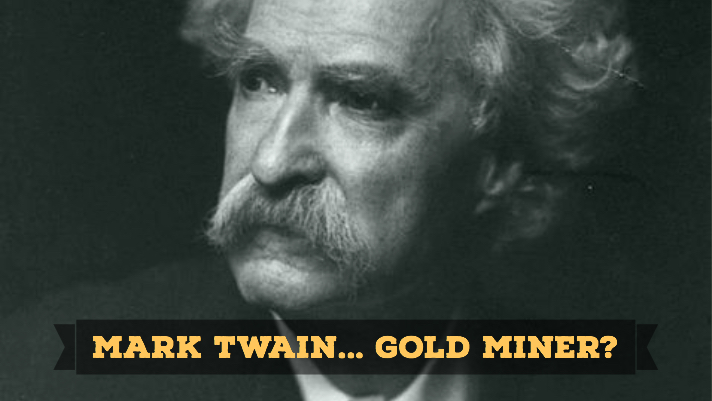 Sometimes in life, it is important to learn and accept early enough that not everything can be done by everyone. One man who learned this quickly was Mark Twain, the famous author – and much less famous – gold miner!

Mark Twain was one of the thousands of men who converged on California and Nevada during the height of the gold rush to make their fortunes. He may not have found much gold, but his accounts of those times are quite amusing. He is probably the most famous man to take an active part in the Gold Rush.

Of course, keep in mind that Mark Twain was not yet a known author. Just a man looking to make his way in the world.

Mark Twain Heads to the Goldfields

His journey into prospecting began when he was in his 20s and had lost his job as a riverboat captain. The civil war at that time brought an end to the river trade that was conducted along the Mississippi River.

By the year 1861, Mark’s older brother by the name of Orion got an appointment from the President Abe Lincoln as secretary to the governor of Nevada, a new territory by then. And bearing in mind he had no job, Mark decided to accompany his brother as his assistant.

After some time, Mark could not continue to work with his brother, as he needed money to manage is own affairs. He tried to do some local odd jobs, but to no avail.

Then one day Mark read a newspaper that carried a mind blowing headline about how prospectors were discovering fortunes every day in all the parts of Nevada. This news caught his attention and immediately interests to go into prospecting arose within him.

A Fortune to be Made?

Despite not having sufficient knowledge about prospecting, Mark and his colleagues teamed up with an old sourdough prospector who was a veteran in prospecting activities. And at that time Humboldt County was on top of the game in prospecting. It had the Sheba Mine which was making millions of dollars from silver, as more discoveries continued to be made on what seemed like a daily basis!

So, Mark and his team journeyed across the 40 miles of desert by wagons to find the famous fortune in the middle of the Humboldt range.

Struggles of a Greenhorn

Their journey took them two weeks to reach their destination. Then upon arrival, Mark left his colleagues and started to look around, while he pretended to have gone out only for a smoke. But after a little walk as he paid attention to every stone he came across, the young man saw a sparkle in a minor drainage ravine that caught his attention. He went closer and picked up the flake which he carefully examined.

In no time, he realized it appeared like gold. He checked the ravine again and spotted some more flakes with a golden appearance. Later, he went back to his colleagues and told them about his discovery, though with some hesitation.

To his surprise, the old timer prospector he was with showed little excitement in his finds, because according to him that was just Mica, which was not even worth 10 cents an acre.

Not everything that glitters is gold!

After some time, Mark and his team made a few discoveries of mineralized quartz veins. They did the drilling and digging of short shafts, and adits for prospecting, but they could not find the much needed fortune. It was at this point that Mark learned that mining was not an easy job, perhaps it was not his way to prosperity. So, Mark and his colleagues drew a conclusion that their chances of finding wealth in the area were minimal. Hence, he went back to Carson City area.

While his mining endeavors may have been short-lived, he probably showed an insight into what the true experience was for 99% of the miners that traveled to the goldfields of the West. While some men certainly made their fortunes, most struggled to make wages and abandoned their efforts in short order.

“A mine is a hole in the ground with a liar standing next to it.”

This is of course Twain’s most famous quote on his experience of the gold rush. It is attributed to the fact that such shady tactics were (and still are) used in the mining business. Much of the mining activity back then had more to do with convincing investors that a mine was rich, rather than actually mining it. Shysters spent more effort getting rich by duping investors than they did from mineral extraction.

The same thing still happens today. People would be well-advised to pay attention to Mark Twain’s wisdom here and apply it today!

However, he never gave up on the riches of Nevada, and so he decided to invest his money and some of his sister’s in the mining sector. At that time Aurora in the mining District of Esmeralda was doing great. And when Mark went to check on some of his investments in the area, he was not doing so well, which led to his bank roll running out.

Unfortunately, he was back to the hard life of looking for money to buy his next meal. And out of desperation, he got a job that was paying $10 per week at a local quartz mill. But he discovered the crushing, washing and smelting of the silver mill was even worse, and could not stand it for a week. So, he approached the foreman’s office and proposed to have his pay increased to $400,000 per week. Not surprising, he was fired in a heartbeat.

His Efforts to Make Mining Work

After some time, he found another experienced prospector by the name of Calvin Higbie, and made a partnership. The two got some claims, and later discovered some rich ore. One would thing that his luck had finally changed, but through a series of unfortunate events Twain and his mining partner lost rights to their claim. A large company staked over the ground and they lost out on a good strike.

Despite his best efforts, it seems that the universe had other plans for him.

The editor of the Territorial Enterprise Newspaper in Virginia City noticed his good writing skills in the periodic letters he sent, and was offered a job paying $25 per week which he accepted though it was not easy to forget about his mining claims. But he had no choice than to go for it.

This was the start, and as well all know today, Mark Twain became on of America’s most famous authors.

Mark Twain did not make it as a miner, despite a number of opportunities that came his way. But hey, when something is not meant to be part of your destiny perhaps it cannot be forced.