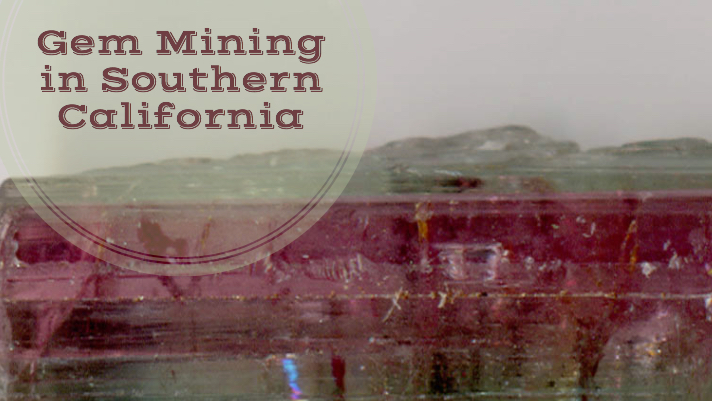 California is one of the richest states in terms of mineral diversity.

No surprise that it holds a great reputation where it concerns gold mining related activities, but not only that; it is also home to a number of gemstones mines. Most of these mines are located in the southern region of California.

Let’s examine the locations of some of these gemstone mines as well as the beautiful array of minerals that are found there.

Topping the list is the Oceanview Mine. This mine is among a few surviving and thriving gemstone mines in California. It is situated in San Diego County. This fascinating mine has produced minerals which include tourmaline, topaz, garnet, quartz, among others. The mine holds a good reputation to itself in the area of gemstone mining; especially that it has been operational for a long time now.

Another famous gemstone mine in the southern part of California is called the Pala Chief Mine, also referred to as the Pala International Mine. This mine is located in San Diego County as well. The minerals extracted from here are aquamarine, garnets, kunzite, morganite, as well as tourmaline along with quartz. The mine is currently open during the fall and winter months.

The Himalaya Mine is yet another known gemstone mine in San Diego County, at Lake Henshaw in the vicinity of San Ysabel. The mine boasts of great history of having had produced more tourmaline than any other mine almost a century ago. Even now, the mine is reported to produce attractive pink, green, as well as black tourmaline. Other valuable minerals produced include spessartine garnet, calcite, morganite, lepidolite, quartz crystals and topaz.

Another rich mine known for gemstones mining in southern California is the Stewart Mine. It is located in the vicinity of Pala. The mine is famous for its reddish-pink elbaite. Other gemstones mined from here are the morganite and kunzite.

The Tourmaline Queen Mines are also some of the well-established gemstone mines, which form a Tourmaline Queen group, situated in Pala District. The gems extracted from here include albite, almandine, biotite, lepidolite, quartz, among others.

The abundance of these gemstones in San Diego County are due to pegmatites host rock. Nearly all of the richest gemstone mines in the world are mining pegmatite deposits and these found in Southern California are no different.

Pegmatites often show extreme texture variations, with coarsely grained and often crystalline structures. The slightest variations within their formation can cause different crystals to form. The most common mineral is quartz, but on rare occasion the conditions are right to produce the rarest gemstones such as ruby, sapphire, emeralds, and those highly valued pieces. This includes the quality tourmalines, topaz, and garnets found in many of the San Diego County Mines.

Open to the Public

If you are looking for a fun adventure then you are in luck! Many of these mines are open to the public and allow you to search for a variety of different crystals in an organized dig.

What you will generally be doing is digging and sifting through the waste material from the active mining operations. You might assume that this material would be devoid of any good specimens, but you might just be surprised. The commercial operations will often miss pieces, and a miner willing to carefully sift through the waste rock can actually find some spectacular gems!

Below are links to 4 of the most popular San Diego County gem mines:

Next: 22 Rockhounding Sites in Southern California