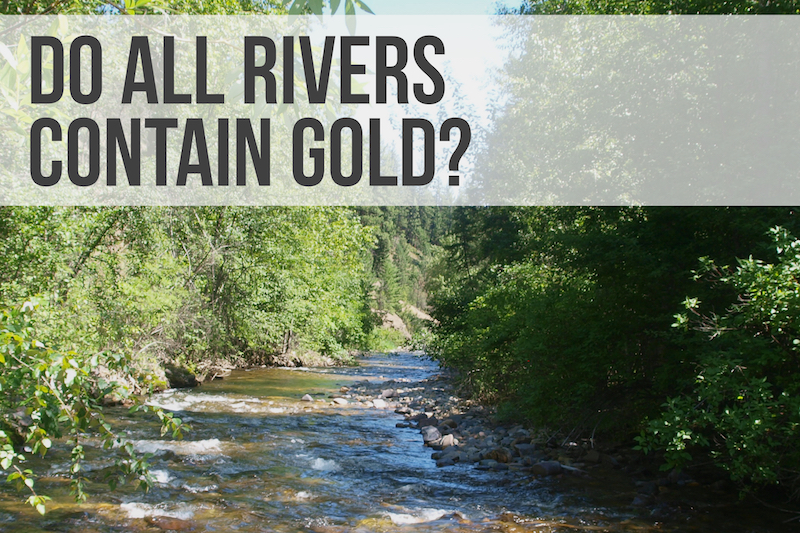 When most prospectors buy their first gold pan, they instinctively go to the nearest creek or river to try it out assuming that is the best place to go.

It’s not a totally bad idea. We all know that some rivers are very rich with gold. In fact some rivers in places like California, Idaho, and Montana have produced millions of dollars!

But does every river actually have gold in it?

The gold in rivers is called “placer gold” and it is the process of erosion that has caused it to accumulate there. The actual source of the gold is generally from veins high above the actual water, up in the surrounding mountains. Over millions of years, these veins of gold erode and deposits particles of gold into the water.

In this type of location, you should be able to find some gold if you put in the work. Since gold is known to occur in the areas, there should definitely be some more left to find.

Rivers Outside of Gold Country

What about rivers that aren’t in mining areas? Most of the rivers around the world aren’t actually in an area where mining has ever taken place. Most people think these rivers don’t have gold in them, and the truth is sometimes there just isn’t any gold in a river.

However, there are many creeks and rivers that do have some gold even though there might be no history of gold being found there before.

Since miners need to find enough gold to be profitable, there are lots of places that simply weren’t rich enough to attract any interest. This is the case for literally thousands and thousands of river miles throughout the world. You might be able to pan the gravels and recover tiny amounts of gold, but a long day of work might only result in a few cents worth of gold.

Even though these rivers aren’t in known gold mining areas, they still have a little bit of gold in them. This is the case for many rivers throughout the Midwest. You can find small amounts of gold there, but you have to work really hard at it. 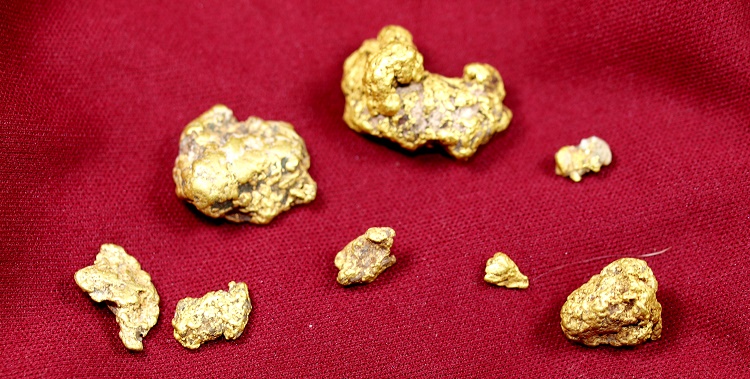 We would all LOVE to find big chunky gold nuggets like these, but they are exceedingly rare. In fact, less than 1% of the rivers in the United States contain large chunky gold like this. Most of the gold that you will find will be tiny specks of gold “dust” and you will need to work hard to get it. Research is important since many rivers simply don’t have a lot of gold (or any at all.)

Here’s the hard truth. Some rivers simply don’t have any gold in them. You could pan and sluice for days and days and you simply aren’t going to find any gold because there isn’t any there.

These rivers are more common than you might think. There is a lot of waters that just don’t have any gold, or they do have gold, but we are literally talking about “trace” amounts that you would have a hard time even seeing with your naked eye.

Don’t just venture down to the nearest river and hope for the best until you have actually done some research. You might get lucky, but most of the time you will have very poor results if you try gold panning at a random location.

The good news is that there is a lot of really good information out there, and nearly every state in the U.S. has at least somewhere with documented gold occurrences. Spending a short time figuring out where to go will increase your chances of success considerably.

Not every creek and river out there has gold. From a practical sense it would be fair to say that most of them don’t have any gold, or there is so little gold that it would be a waste of time trying to find it. Taking some extra time to research good locations is time well-invested.

Next: 6 Types of Micro-Gold Recovery Equipment in Action