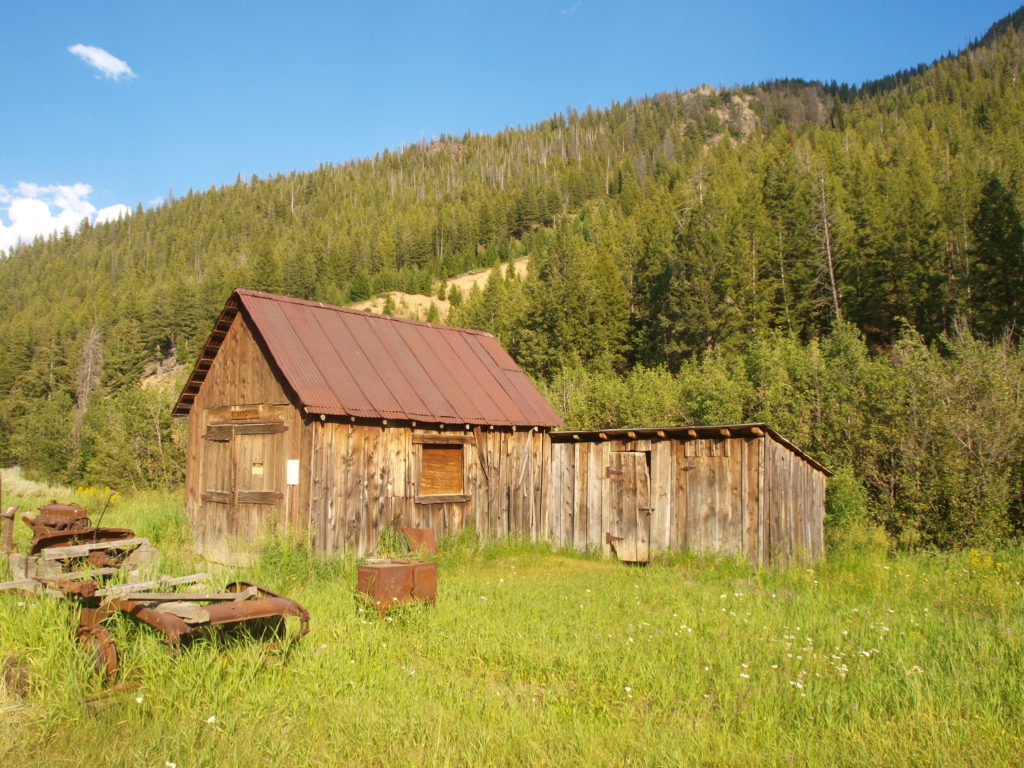 Central Idaho has lots of small, abandoned ghost town hidden deep in its wilderness. At one time there were thousands of men here scouring the hills in search of primarily gold and silver. Access was difficult, and any discovery needed to be exceptionally rich to justify being so far away from civilization.

When gold was discovered along the Yankee Fork of the Salmon River, it was soon understood that these were worthy discoveries. People from all over the country came here to make their living. This article will give accounts of early mining history for the two respective towns that sprang up; Custer and Bonanza.

To begin with, Bonanza is one of the towns that came to life when gold was discovered in the area. Its location lies along the Yankee Fork, a big tributary of upper Salmon River in central Idaho.

The town was founded in 1876, and due to the optimism early miners felt as a result of the ability or potential the place had to pay off many miners richly at that time, they called it Bonanza.

In no time, the population of Bonanza grew to about 600 people and began attracting business related ventures into the area. The town had a dentist, a tin shop, hotels, a watchmaker, saloons, a post office as well as boarding houses.

Records reveal that during its peak times of gold mining, Bonanza existed for more than 30 years, until all active mining activities diminished around 1910.

The town of Bonanza was well-planned at the time of its establishment, compared to other mining towns. It had good sources of water, as it had a public well as well as a water system put in place for its inhabitants, even though at some point in 1889 and 1897 the town got swept by fires leaving most of the infrastructure damaged. 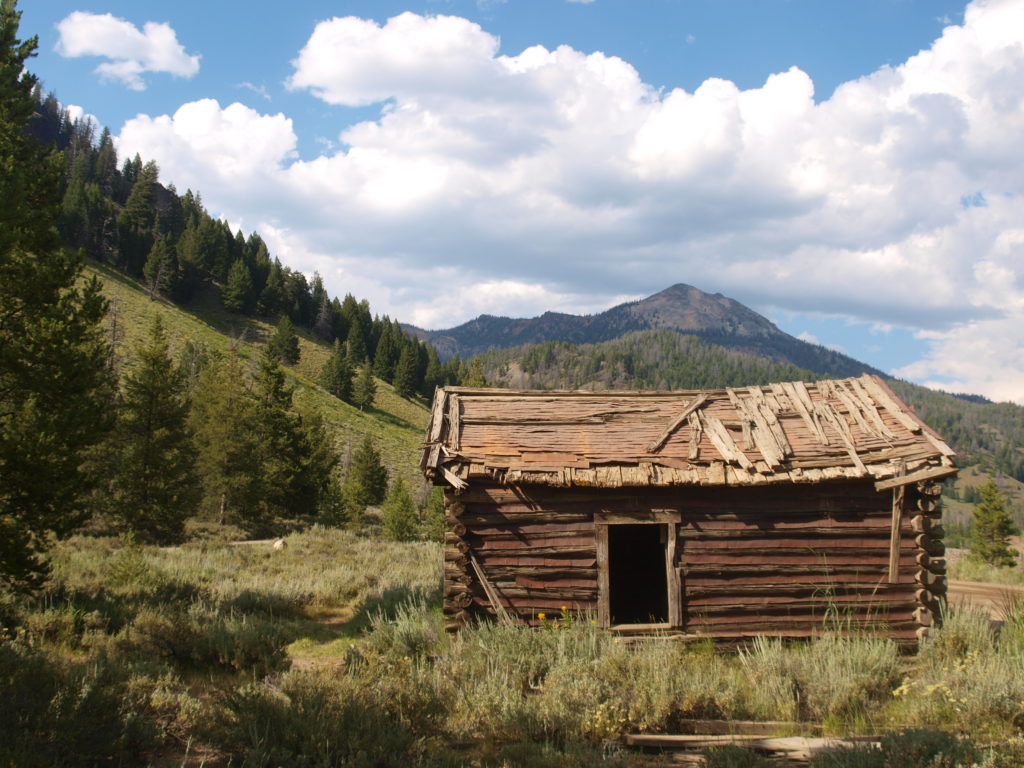 There are a few old cabins remaining on the site of Bonanza, but most of the old building were destroyed in a forest fire.

Eventually, the General Custer Mining Company was established, with an infamous investor known as George Hearst. Plans to set up a toll road from Challis to the mining area to facilitate for the construction of a large stamp mill were put in place, together with the site for Custer. By 1879 Custer was up and running.

In December 1880, the construction of the General Custer Mill was finished. This stamp mill was powered by steam, which had 20-stamps with 500 gallon settling pans.

Meanwhile, a 3,200 feet aerial tram was also put in place to carry ore from the mine to the mill. In a few years’ time, the towns population surpassed that of Bonanza. 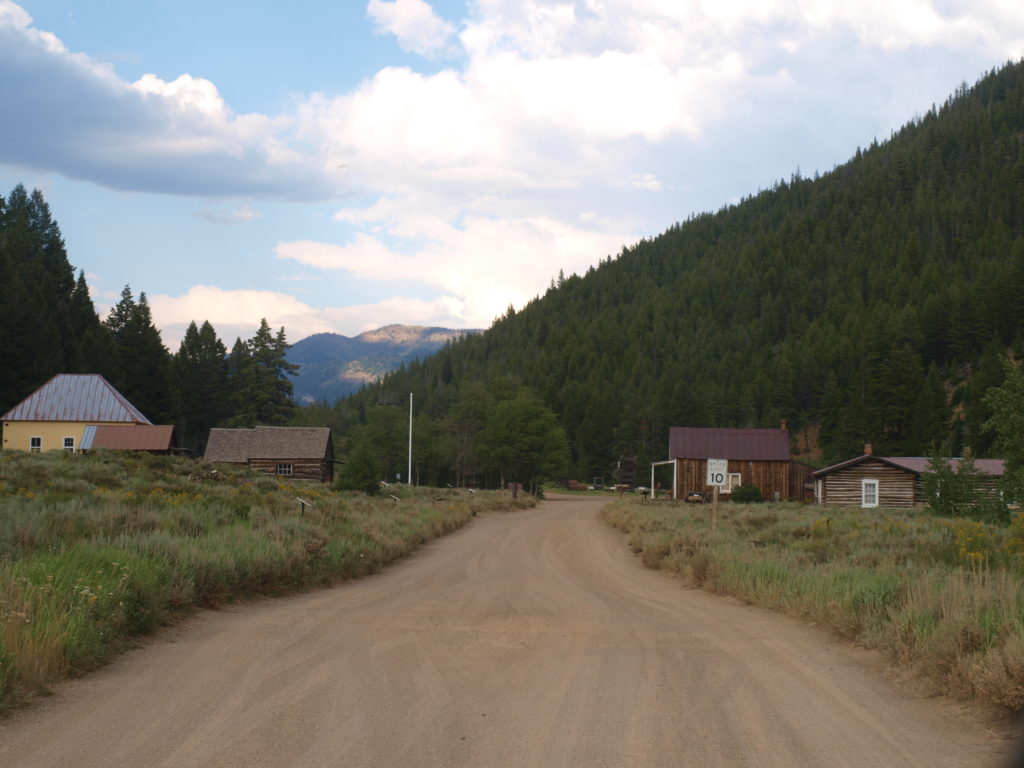 The townsite of Custer has been well-preserved. There are lots of old buildings and mining relics that you can explore. It is easily accessible from the main road up the Yankee Fork and is a neat place to visit if you are camping near Stanley or the Sawtooth Mountains. 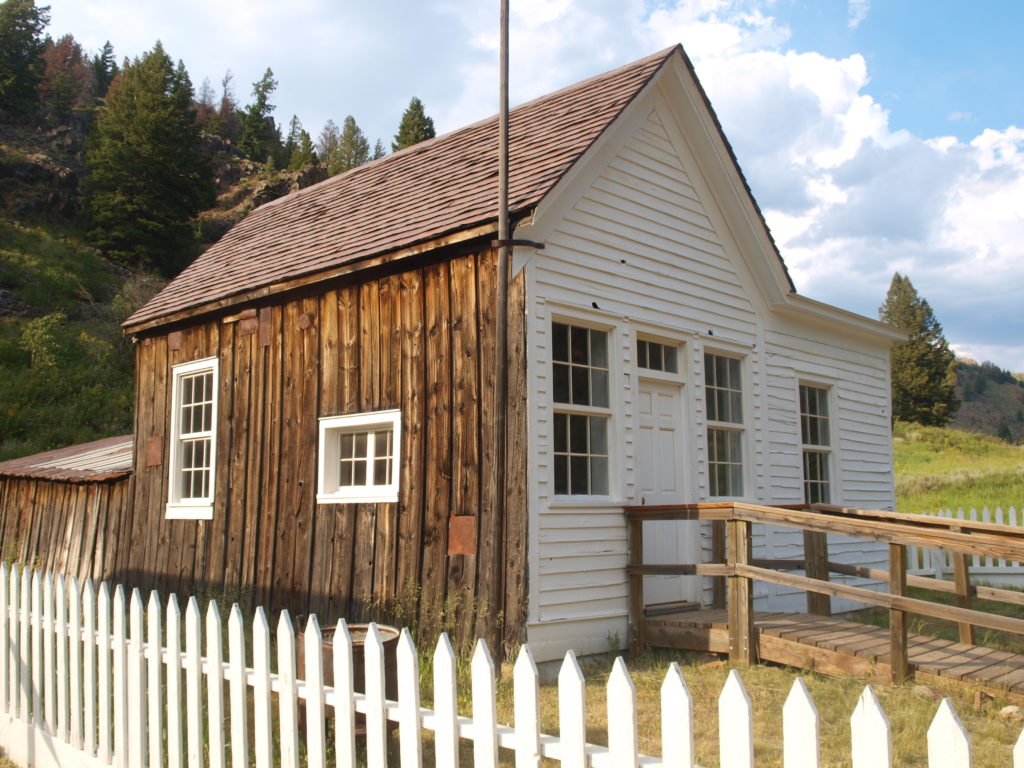 One of the many cabins that you can see while visiting Custer. 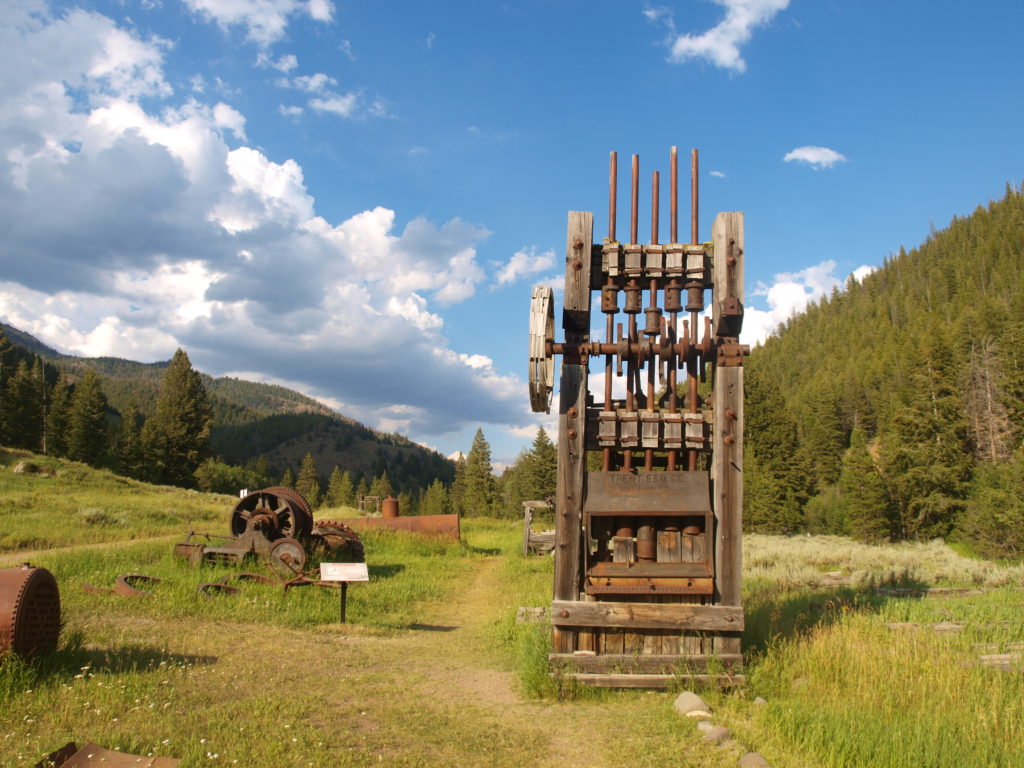 A large stamp mill and other mining relics on display at Custer.

In 1880 the population of Custer had been listed to have been 213 people, among them were 49 Chinese. And the area occupied by the Chinese recorded a number of developmental projects, which included laundry services, a harness and shoe shop.

In 1888 the General Custer Mining Company ceased to operate, and there was a great decline in gold production as well as life in general. However, the decline did not stay long before the Lucky Boy Gold Mining Company came in 1895, and bought the Custer mine together with other properties that belonged to the mine. Once again, life was back in the town, especially when 130 men got employed by the mine.

The population of Custer was on the rise again, especially in 1897 when its neighboring town Bonanza experienced a fire outbreak, most of its residents relocated to Custer. By 1899 the town was boasting of five saloons, three stores, a hotel and three boarding houses.

By 1910, just like Bonanza, all the mining companies had been shut down in Custer, leaving the two towns deserted, with just 66 people left in both towns. But there is obviously a possibility to find more gold, because not all the gold had completely been mined by the time the mines shut down.

Read: 19 of the Richest Gold Mining Towns in Idaho (Map) 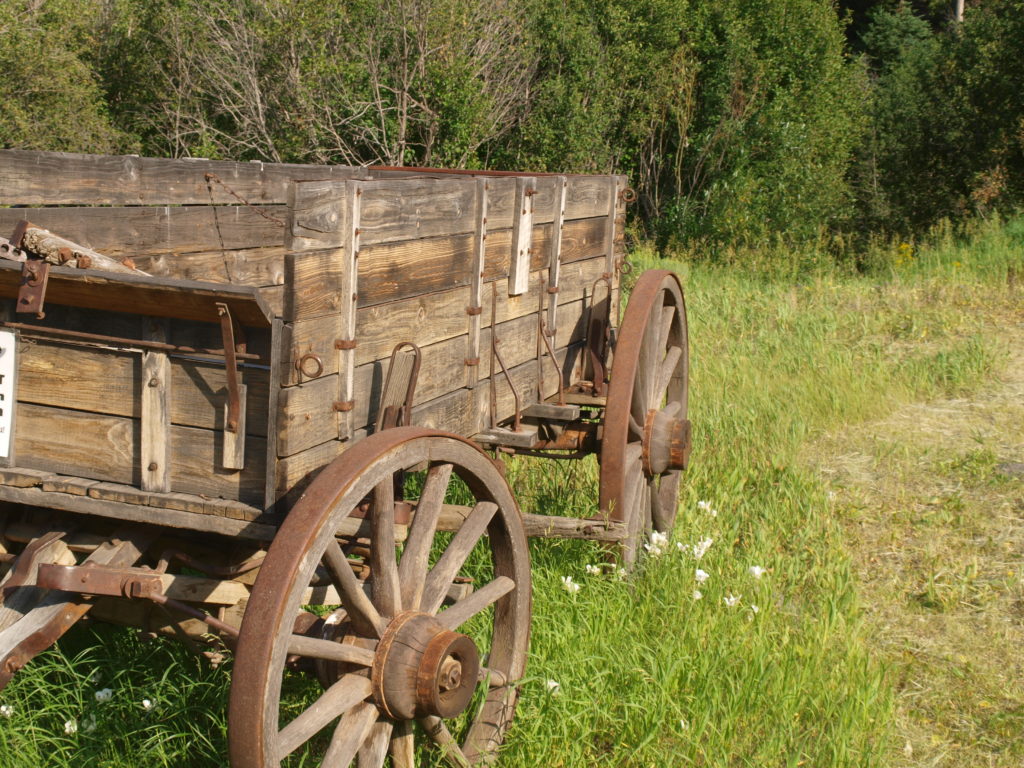 Dredging Brings Mining Back to the Yankee Fork

Starting in 1939, the Yankee Fork had a huge gold dredge which was built and ran through 1952. It was shut down for two years during the Second World War, but still managed to recover over eleven million dollars worth of gold from the river bottom.

The dredge brought mining back to the Yankee Fork Valley, but not on a large scale. The dredge could be operated by a small crew of men. Even with the dredge working through the valley, it is fair to say that the peak of mining was long-over by that time. Pretty much all the miners had moved on, and the mines in the surrounding mountains were abandoned.

Custer has been preserved very well. The pictures in this article are from a recent visit during the summer of 2018. As you can see, there are many old mining relics on display and most of the main structures are still in place. Bonanza is still there too, although it’s a lot easier to miss. Only a handful of old building remain in Bonanza. 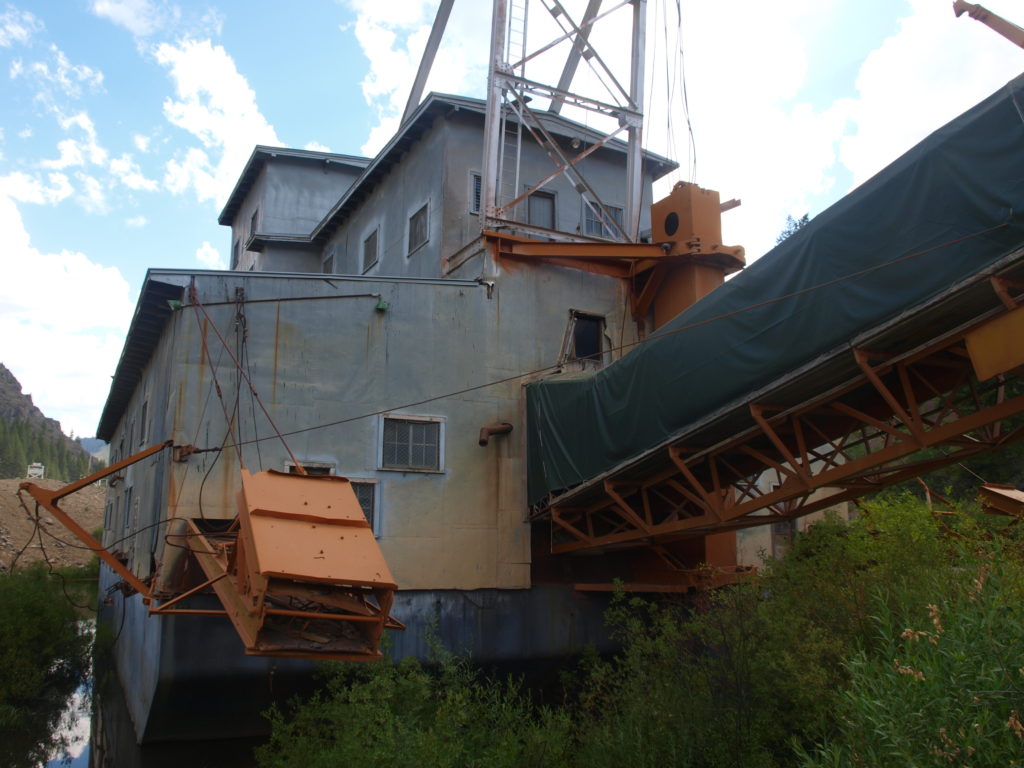 The Yankee Fork Gold Dredge has also been preserved and you can even go inside and take a tour! It is open during the summers during select times.

Next: Bayhorse, Idaho – One of the Finest Old Mining Towns in the State