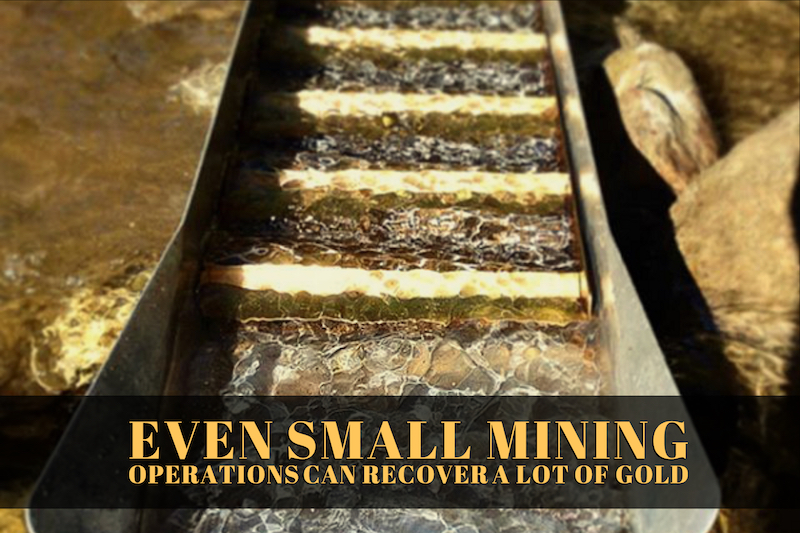 The key to success if finding the balance between high recovery rates while still managing to process lots of gravel. Do both of those things, and you can expect to finish up with a good amount of gold at the end of the day.

Gold prospectors all have hopes of uncovering a rich gold pocket, loaded with heavy gold nuggets and pounds of gold. This is the type of thing that dreams are made of.

It could happen. I know people who have found rich pockets that have held over $100,000 worth of gold that was easily recovered over the course of a few hours. Talk about the find of a lifetime!

Unfortunately, those rich deposits are few-and-far between these days. For the average prospector working day to day, you had better have more realistic expectations than that. And if you want to be successful, then don’t hold out on finding the needle in the haystack. You need to work ground that will produce gold consistently, day in and day out. 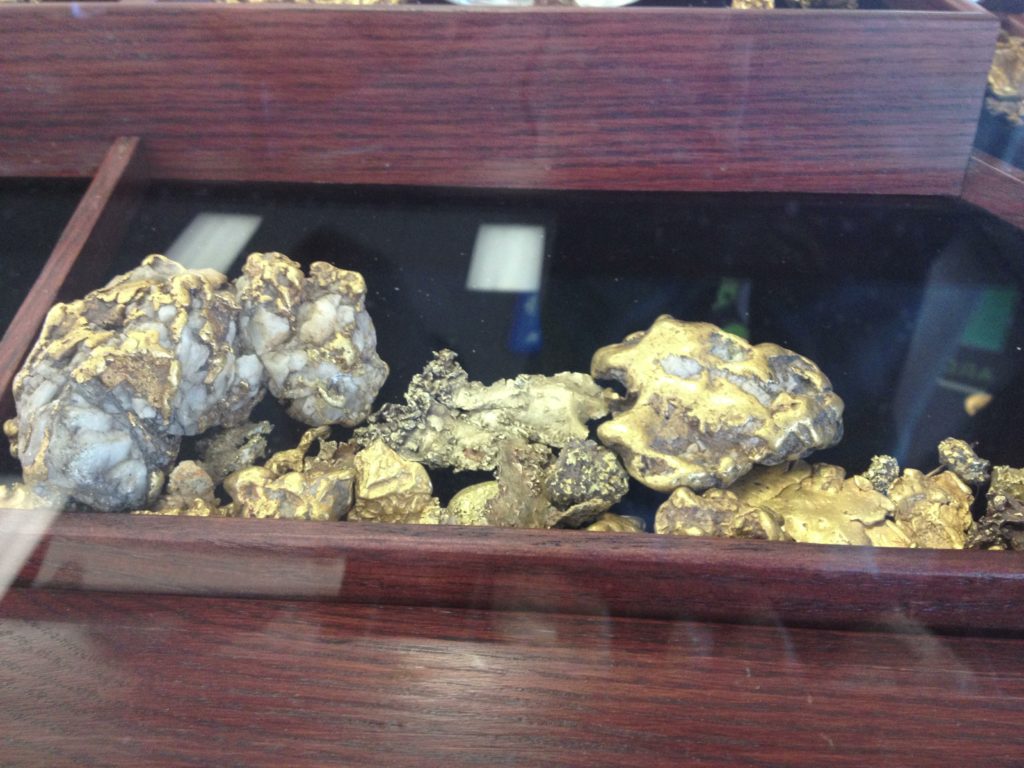 Seeing huge gold nuggets like these (on display at the US Bank in Baker City, OR) can give you dreams of hitting the mother lode! Unfortunately, gold like this is extremely rare, especially nowadays. If you think you are going to go out and easily find big multi-ounce nuggets then you are going to quickly be proven wrong.

High-Grade to Low-Grade and Everything In Between

I will admit that I’m not a huge fan of that show Gold Rush, but I have seen a few episodes over the years. As the years have gone by they have certainly gotten better at finding gold, and I’ve noticed a few changes that are worth noting.

Early on when they were all greenhorns, most of the miners have very little knowledge and were fueled purely by dreams and speculation (Anybody remember the “glory hole?”) rather than any real knowledge or understanding of gold mining.

Fast forward a few season, and you will see that they are now mining known gold reserves. The are sampling areas, evaluating the richness of the placer deposits, and working a LOT MORE ground than they did when they started out. The gold is small, but when you are mining thousands of tons over the course of a season it adds up. But how does this relate to a small-scale miner?

The Gold Rush boys are working ground that most of us would consider low-grade, but by processing tons and tons of material through massive mining equipment they are still able to recover lots and lots of gold. And even though they gravels don’t contain a lot of gold, there are thousands of yards of material to process.

These lower-grade gold deposits would not be attractive to most prospectors of small miners. If you are a 1-man operation, a long day of shoveling is not going to move enough material to make this type of ground profitable. You are going to put in a lot of work for very little reward.

I can guarantee you that you will be discouraged by the amount of gold that you find at the end of the day if you work these types of low quality placers. They key is to seek out decent ground that has what I would call “paying values” where you can still move a lot of material and recover decent gold at the end of the day.

Read: What is Placer Gold and How do You Find it?

Seeking Out Ground that will Pay Consistently

If rich gold pockets are too rare to focus on, and the extensive low-grade gravels aren’t worth your time, then clearly we need to look for something in the middle.

Areas that consistently produce decent gold over a large area are the true “bread and butter” of most placer miners. You will not succeed if you only seek out area where you will find an ounce per day… it’s just not gonna happen. Find decent spots where a day of hard work will produce a couple grams simply by panning and sluicing and you will he a happy camper!

Once you’ve identified a rich location, and determined that the paying gravels are extensive enough that you won’t run out of good ground in the foreseeable future, then its time to consider staking a claim and perhaps scaling up your operation! 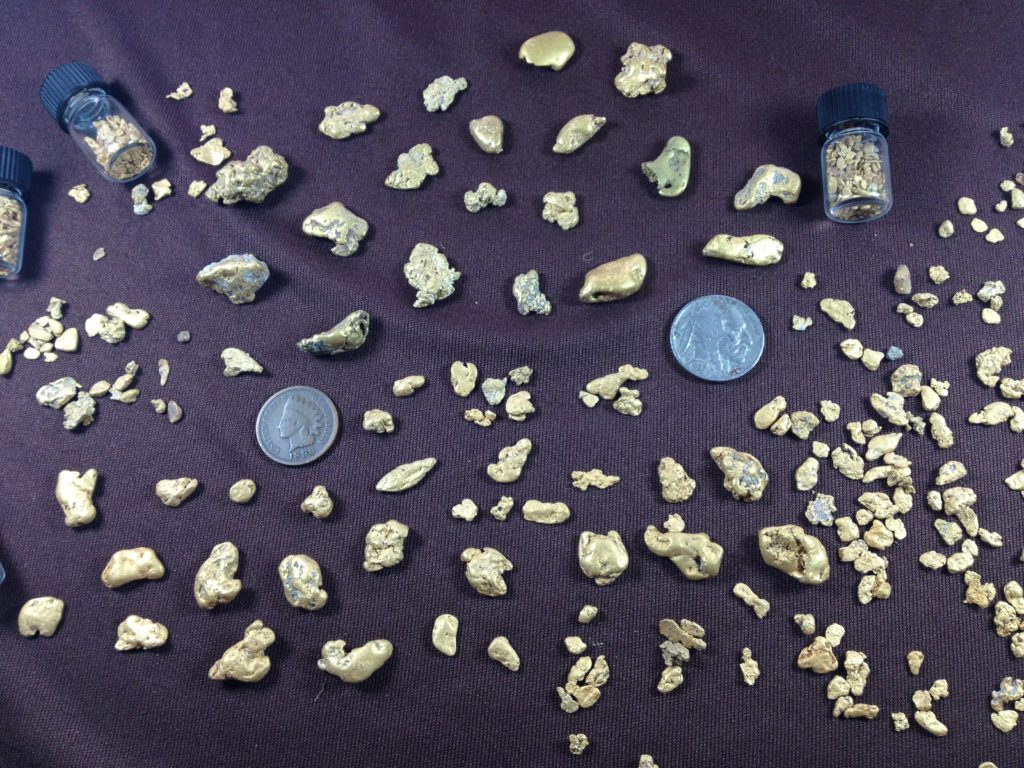 A few years ago I was prospecting on a small creek (Location #1) in Southern Oregon. I came upon a small area where I could see old digging along the banks of the creek. I could see that the old timers had spent some time here, so I slowed down and started panning. I soon noticed that the gold was richer in this spot than it had been in the other areas I was prospecting. I thought I was on to something big!

It was exciting, and I did find some pretty decent gold at that location. Unfortunately, there was not a whole lot of gravel left to dig out. I spend most of the day working that spot and I ended up finding about 1/4 ounce of gold over the course of an afternoon. Not bad! But by the end of the day, this spot had basically played out and there wasn’t any gravel left to dig. I did find a few more pieces of gold by crevicing in the bedrock, but the spot was pretty much done and I moved on.

Compare this with another area that I like to prospect. I have mined this creek (Location #2) for years and it always produces some decent color. I usually end up with a gram or two of gold after a hard days work. This area might not be as rich as my Location #1, but it keeps producing day after day, year after year!

And here’s the best part about Location #2… I can bring in some bigger equipment and increase my production. At this location, the best choice is a good highbanker because the source of the gold is from an ancient river channel that intersects the current stream. I can dig into the bank and run it through my highbanker and consistently find some nice color. On the other hand, there’s no reason to bring any equipment into Location #1 because all the paying gravel is pretty much gone! Aside from a few pockets of gravel down in the bedrock cracks, the area is pretty much worked out. 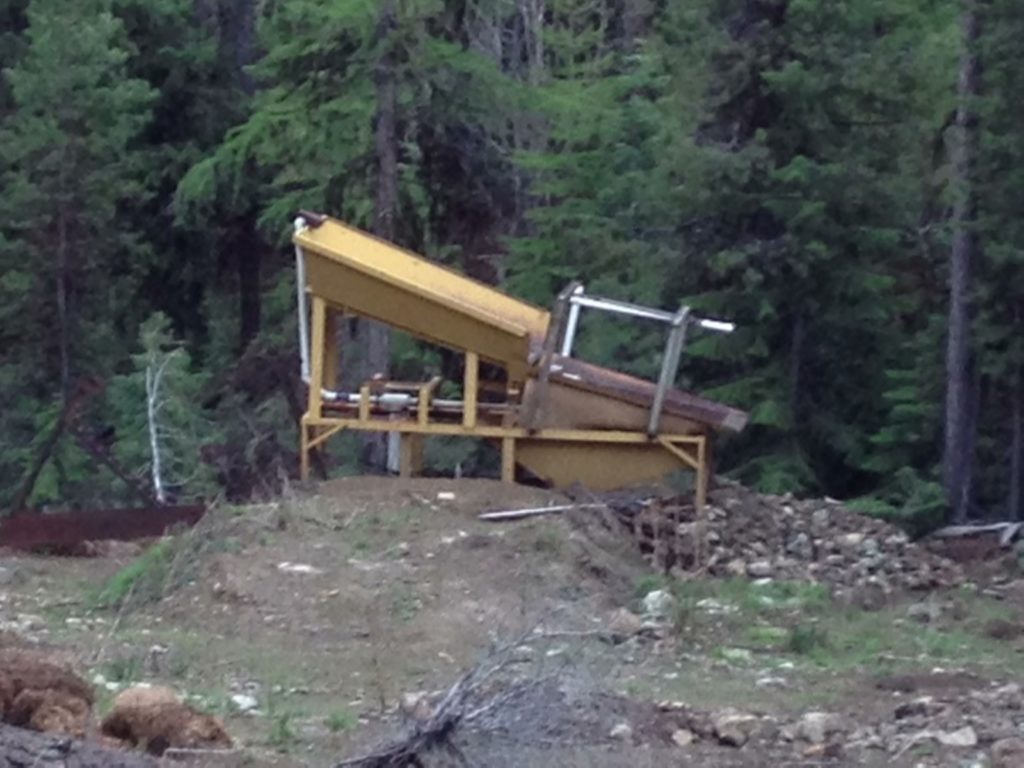 A big trommel setup can run a lot of material and produce lots of gold if you are in a good area.

How to Scale Up an Operation

Finding a good spot to focus your time is all about sampling, and without proper sampling you are never going to be a truly successful miner. This takes little more than a gold pan and some basic digging tools to do. It’s only when you come across some gravel that holds paying amounts of gold that it’s time to slow down and work the area properly.

Most miners would love to use bulldozers and wash plants like the guys on TV, but for the average prospector that isn’t realistic. But that does not mean that we can’t scale up our operation to move as much dirt as possible. In a creek or river, the first and most obvious choice is a sluice box. You can buy one for less than $100and they can increase your overall production 10-fold over using just a gold pan alone. For mining stream gravels this is very likely to be your best choice.

I mentioned a highbanker earlier. This is a simply a power sluice which uses a pump to bring the water to you, rather than having to be where the water is. These have several advantages in some situations. First, if you are digging away from the water itself they can be set up right on location so you can easily shovel right into the highbanker without having to transport the material. Second, they can operate in places with limited water where a sluice might not work well. You can pump directly out of a small stream or man-made reservoir to collect water to run through it. Very efficient.

If you really want to move a lot of material, then a trommel setup can be very productive. Since the trommel does the classifying for you, not only can you feed a lot of material directly into it, but you can also expect better recovery rates than if you are feeding material into a sluice without classifying.

Suction dredges have long been one of the best ways to process pay streaks in large creeks and rivers. If you can use one and you’ve found some rich ground then you definitely should. Unfortunately, we have been seeing some serious restriction put on dredging in recent years, particularly in some of the Western states. They aren’t always an option now, but if you can get the proper permits and legally use one then I would encourage it.

There’s Still Gold Out There for the Small Guy

Focusing your time and effort on the right areas is truly the key to being successful as a small-scale gold prospector.

As I have outlined above, wandering all over the place hoping to strike it big and recover the “Mother Lode” of all gold strikes is most likely going to leave you disappointed. This is what a lot of newbies and greenhorns think will happen when they first start mining. They figure they can just go out into the hills and strike it rich. Seasoned old veteran miners know better.

Of course, if you find some super rich ground, then good on ya’! Work that area hard and get every last speck of gold that you can! All I’m saying is, don’t leave behind decent ground to go on a wild goose chase for the “glory hole.”