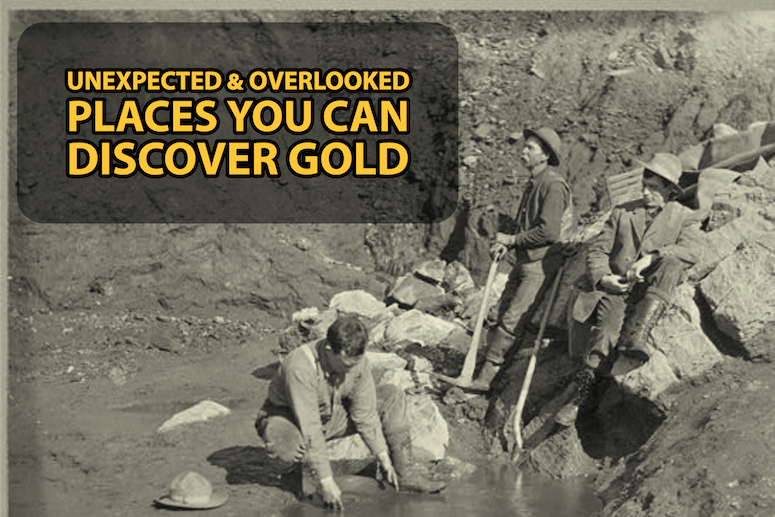 Most of the time, I emphasize the importance of focusing on reliable gold producing areas. A knowledgable gold prospector will often know right where the gold is. They don’t really need to do a lot of prospecting, at least not to find gold. They can usually recover some gold in their pan without too much effort.

The do this by focusing on typical gold locations. Most of the time I am talking about searching for paystreaks and other rich areas that consistently hold gold.

These locations include the insides of river bends, behind large boulders, deep down in bedrock cracks, and other places where gold typically settles.

This is good information to have, but don’t get tunnel vision. Seeking out typical placer deposits in a river is just one type of place that you can find gold. And in areas with lots of pressure it can actually pay off to look in the spots that other prospectors are ignoring.

In many areas, heavy clays can act like a false bedrock that will catch gold. Even a thin layer of clay can capture flood gold and prevent it from dropping all the way down to bedrock.

There are plenty of people who will dig right through a clay layer and down to bedrock. All the gold might actually be getting caught above the clay and never make it to solid rock. The bedrock will be completely devoid of gold, and the prospector will assume there is no gold. They are working the deposit wrong!

Miners usually hate panning clays because it can trap gold and cause considerable losses. However, gold can get mixed right in with clays, so don’t just avoid it. It may be worth busting up and panning to see if there is any gold in it. Yes it can be challenging, but it might just pay off.

Bench deposits happen when natural erosion causes a river channel to become “high and dry” above an existing river. These are no secret, I’ve seen places in California where pretty much everything is old ancient river channel. It’s hard to miss.

However, sometimes small, thin layers of pay dirt will be exposed above a river or creek that might be easy to overlook. Sometimes it gets covered with overburden, pine needles, etc. and simply isn’t very noticeable. These old river gravels might be way richer than the gravel in the current riverbed. Be on the lookout for them and do some test panning if you come across them.

Your best bet for finding gold in an active river channel is to locate the potential pay streak locations and then dig down to bedrock, cleaning out the cracks and panning the concentrates.

Another unusual way to find gold is to look for moss on the rocks. Moss can actually act as a natural trap that will capture gold, in very much the same way as a sluice box would. “Mossing” the rocks, carefully breaking it apart over a gold pan will release dirt and sands that were trapped. This can be surprising rich.

Moss does a particularly good job of catching very fine flood gold, as well as glacial gold. If you are in an area where only fine gold is present, then definitely give this a try.

Gravity is what causes gold (which is heavier than pretty much everything) to concentrate in drainages. Usually rivers get the most attention simply because they are large. Therefore, they will hold the most gold.

This doesn’t mean that small tributaries won’t contain gold in the very same way. A tiny tributary that runs off the mountain could easily have some gold too.

Plus, people overlook these little tributaries. This means that you have the chance of finding a deposit that could be spectacularly rich.

Prospectors get too focused on where gold has already been found. I would encourage you to do some exploring away from the commonly hunted areas. To me, this is what true prospecting really is!

Even in rich gold country, there are gold deposits (both big and small) that simply haven’t been found yet. These are often up on the hillsides. The gold may be locked up in the hard rock, or it may have eroded out and be scattered as nuggets across the hills and if you scan with a metal detector you might just find them.

If these sources haven’t yet made it down to the creek yet, they can be easily missed. 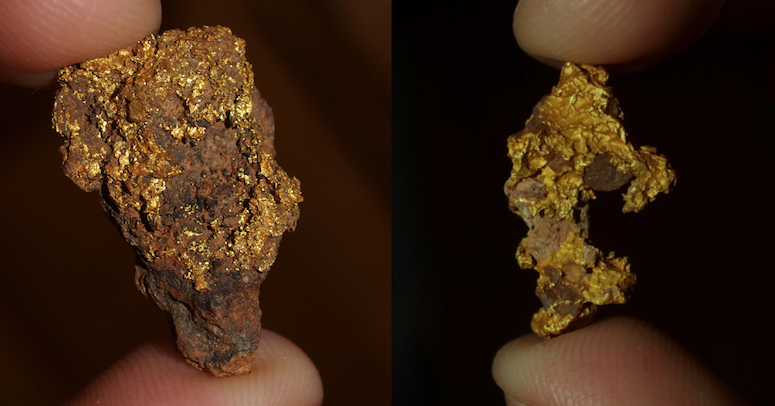 These rough gold specimens were found up away from creek up on the hillside. There are undiscovered gold deposits like this throughout gold country. They are hard to find, but they can be a REAL PAYDAY if you find one!

Thinking Outside the Box

I still recommend that you focus on known areas with gold, and spend most of your time in those area where the most prospectors would look. Hitting those typical paystreak locations is going to pay off most of the time.

But these areas have been – and continue to – be prospected very hard. I am finding that the more time I spend prospecting in places that others overlook and using methods that others don’t use, I am having success.

Don’t rethink the wheel. If you are having success panning along the river bank and you don’t want to try anything new that is your choice. You might still find a lot of gold.

The ideas above are worth trying. I think the harder your area has been prospected, the more important it is to try new things. You might just be rewarded with that precious glimmer of gold!

Next: Making the Shift from a “Greenhorn” to Skilled Gold Prospector