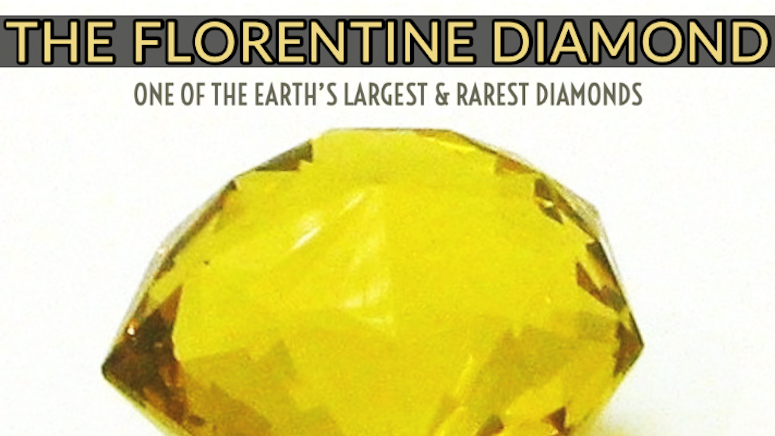 The history of the Florentine Diamond is one filled with mystery and danger. It might also have something to do with the history of World War I. If you are one of those treasure hunters then this might be your perfect research project for you. The Florentine Diamond is also known as the Tuscan, the Grand Duke of Tuscany, and even the Austrian Yellow.

It was first cut by Lode Van Berkem for Charles the Bold who lived from 1433-1477. Its signature feature is its bright yellow color with some hint of green. On the scale, it weighs a whopping 686.3 carats!

Loss of the Lost Diamond

Missing for over a hundred years now, there are a lot of mysteries concerning this Diamond’s whereabouts. In fact, I’ll just be straight up and tell you that no one knows where exactly the Florentine is to-date. Though lost, it will forever be in the hearts of diamond enthusiasts with some still on the lookout. There are some theories that try to trace and at least explain the diamond’s whereabouts. Here are some.

It is believed that after Charles The Bold become the first owner of the Florentine Diamond, he was beguiled with its beauty and wore it everywhere he went. Some witnesses reported last seeing it on Charles as he went to fight in the battle of Nancy in 1477, maybe he thought it would bring him some sort of luck.

Charles The Bold died in battle on January 6, 1477 and his body was found 7 days later. A Swiss fella, who some say was a foot soldier whereas others say was a peasant, found the Diamond then later sold it to a priest for just 1 florin thinking it was just a valueless piece of glass.

From that point, Florentine’s whereabouts become unknown as it went from one owner to another until it finally landed into the wealthy hands of the Duke of Tuscany in 1665, most likely the reason it acquired the name The Grand Duke of Tuscany. Because of its exotic beauty, it later caught the attention of the Pope and was bought by some Vatican officials who thought it would be a fine and holy piece to the Pope’s tiara, the lucky Pope who got the chance to dorn this treasure was Pope Julius II.

But the story doesn’t end there, the Florentine Diamond continued switching owners until it ended up being the Hapsburg Imperial treasure. This was as a result of the marriage of Duke Francois de Lorraine to Empress Maria Theresa of Austria. At this point, it was probably known as the Austrian yellow.

Florentine’s stay in Austria was short lived when King Charles fled with it to Switzerland after the fall of the Austria-Hungary empire in 1918. As from the early 1920s, its whereabouts became unknown with some saying that Charles probably sold it to support his family in exile or help him reclaim his throne. It was after his death that the diamond’s trail went completely cold. Its last seen is mostly believed to be in 1918 as one of the main pieces of a hat.

Truth or Fact? Other Theories.

A well-known art historian has said that although this whole story is sweet to the ears, it is nothing more than fantasy. He claims that when the Portuguese conquered the South Indian Kingdom and the diamonds mines, the diamond was taken from the Indian ruler of present-day Markings by the Portuguese governor of Goa, Ludwis Castro who later gifted it to his wife, Mexia de Noronha.

Though not known how, it ended up in the possession of the Roman Jesuits who later sold it to the Grand Duke of Tuscany, Ferdinand de Medici in 1601. At this point, the diamond was still uncut but his son Cosimo II, got a Venetian diamond cutter to complete the task. This theory right here explains how the diamond ended up being a family treasure of the wealthy and powerful Medici’s family. After the last of the Medici men died, its safekeeping rested in the hands of Anna Maria Medici until she died in 1742.

If you are interested in picking up from where art historians have left off concerning the diamond’s whereabouts, consider checking out its copies found in the Natural Science Museum in Milan or at the Cross of the Passion by Cosimo Merlent at the Opera del Duemo Museum in Florence.