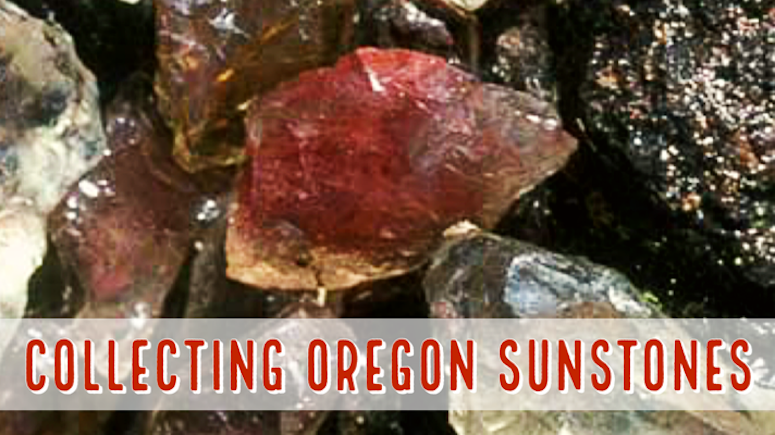 While Oregon has much to offer by way of its natural beauty, an equally colorful treasure is hidden beneath its trails—gemstones that shine brighter than the sun. Because of the state’s long volcanic history, it has become one of America’s leading producers of precious stones. In fact, Oregon’s state gemstone is a type of feldspar, more commonly called Oregon Sunstone, which originates from volcanic flows in the south-central area of the state.

Generally, feldspar is translucent with most of the color is most concentrated in the middle of the stone, becoming lighter toward the edges. The Oregon sunstone is well-regarded as some of the highest quality feldspar found not just in America, but all over the world.

Central Oregon is set apart by the sheer quality of sunstones it produces. They form in molten lava discharged by volcanoes onto the earth’s surface. In areas where the lava has weathered away and the sunstones are clearly visible, some gem hunters have described the sight as a glittering sea of crushed glass. Sunstones also produce bright copper-colored flashes when they reflect light at certain angles, hence their name.

For those venturing their way to the West Coast in search of these gems, head on over to Harney County and in Lake County north of Plush, Oregon. Interestingly enough, the first commercial sunstone mine in America was opened in that area by famous jeweler Tiffany & Co. They acquired mining claims in the early 1900s and produced jewelry with faceted sunstone and sunstone cabochons, calling them “Plush Diamonds”.

Two of the productive sunstone deposits in Oregon can be found in Harney County, while the third is situated in Lake County. Most of these are situated on federal land managed by the Bureau of Land Management (BLM) or on private claims.

There are several dig sites open to the public such as Dust Devil Mine, Double Eagle Mine and Spectrum Sunstone Mine near Plush.

In Lake County, the BLM manages the Oregon Sunstone Public Collection Area, located between Albert Rim and Warner Valley. This area has both public and private mining claims, with the public area marked by orange posts. If you forget your trusty rock hammer. 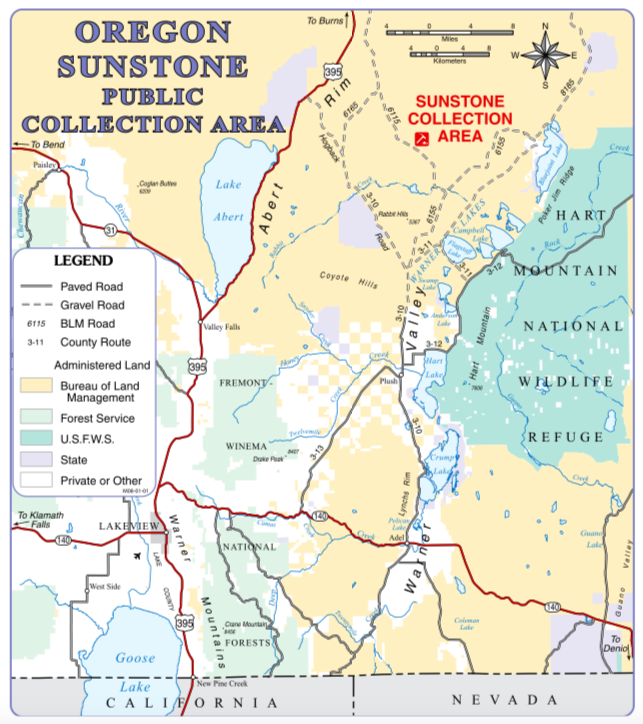 Apart from the state gemstone, the Oregon desert also produces beautiful varieties of opal, a stone formed by silica deposits in rhyolite, basalt or sandstone. Its name comes from the Roman word opalus, which means ‘to see a change of color’. Gem-grade opals display play-of-color or iridescence, appearing to change color when viewed from different angles. Imagine, a single opal gemstone can contain all the colors of the spectrum!

One of the more rare varieties of opal produced in Oregon is called the fire opal. While these don’t typically display play-of-color, these translucent gems come in warm and vibrant hues of golden yellow, orange and red. They can also exhibit bright green flashes in certain angles of illumination.

One of the best sources of fire opal in Oregon is at the Juniper Ridge Opal mine in the southeastern area of the state. This site was previously the only fee-digging opal mine in Oregon. Though they no longer offer this, the owner of the Red October claim occasionally posts open invites for the public to dig at the site. Fire opals found in this area exhibit remarkable clarity and luster even after being cut. They are also quite large— some chunks are over 3-4 inches long!

Though these gemstones can prove to be quite elusive, there is a strong rockhounding community in the area that can offer their expertise and knack for determining which rocks to crack open. For all the avid rockhounds out there, what are you waiting for?

8 Places to Dig for Thundereggs in the Oregon Desert