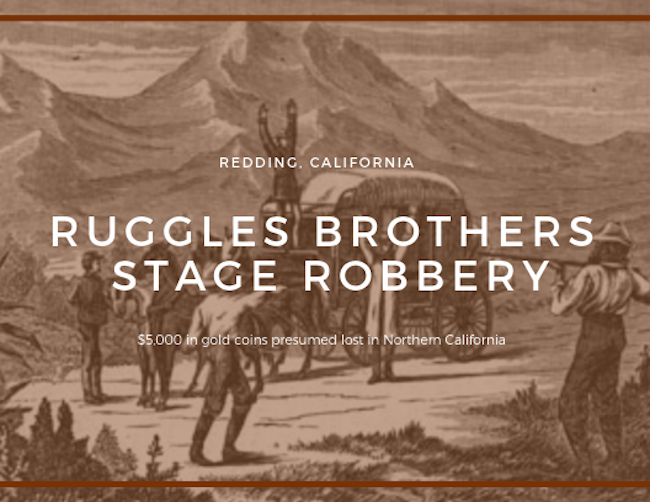 John and Charles Ruggles were the sons of a well regarded family living in Tulare County, located in the south/central part of California. Charles, the younger of the two attended college, and his father had every reason to believe young Charles would do well in life.

John was another matter, as he had been a problem child since he was young. While still quite young, he did time in prison for robbery.

Charles may have stayed on the straight and narrow except for the unfortunate timing of graduating college at the same time his brother John was released from prison. Charles had had no trouble with the law at the time of his graduation, but his brother began to corrupt his brother into a life of crime. John convinced Charles that they could make some easy money by robbing a stagecoach.

In May of 1892, the Redding & Weaverville Stage was traveling to Redding following along the Middle Creek Road. The driver was a man by the name of John Boyce, and his only passenger, George Suhr, was riding shotgun with him. Another armed man rode inside the stage.

Charles and John Ruggles were lying in wait at the point where the stage had to negotiate a hairpin curve in the road. As the coach slowed, Charles Ruggles stepped out of their hiding place and pointed a shotgun at Boyce and ordered him to stop and toss the strong box, carrying $5,000 worth of gold coins, down to him. Boyce offered no resistance and immediately threw the box down.

Montgomery fired from inside the coach, and peppered Charles with buckshot to the face and chest. Before he fell, Charles got off shots, wounding both Suhr and Boyce in the legs. John, who had still been hidden in the trees, fired at the coach and fatally wounded Montgomery. Spooked by the gunfire, the horses ran wild with the coach. 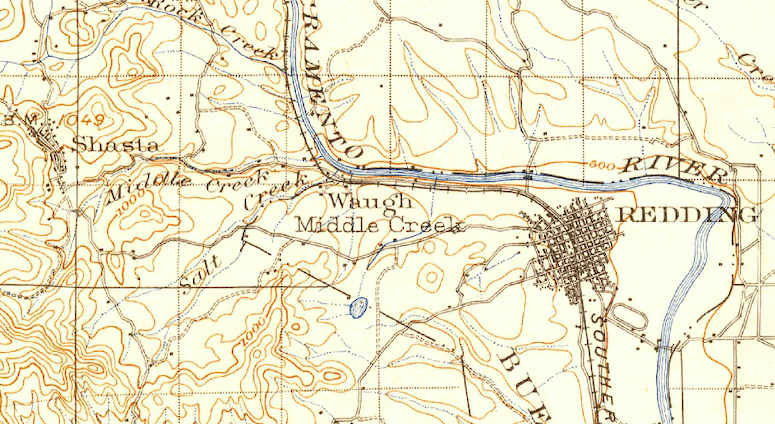 John hid the strongbox nearby and, assuming that his brother Charles was close to death, he ran. Of course, as soon as the stage reached the nearest town, the town folk immediately got a posse together, and Charles was soon located. His wounds were serious, but he was treated in the Redding jail and survived.

A short time later, John was arrested and taken to the Redding jail, where he found his brother, alive and recovering. It had been six weeks since the robbery took place.

Hoping to save themselves, John lied and said that Montgomery, the stage guard, had been league with them. He indicated to authorities where they could find the strong box along Middle Creek, not far from where the robbery had taken place.

As the Ruggles Brothers sat in jail awaiting their fate, the townspeople wanted quick justice. A mob of local men went to the jail to get justice for their dead friends.

Although the jailer did his best to hold off the mob of 40, he could not hold them back for long. The vigilantes blew up the safe, took the keys to the jail and removed Charles and John from their cell.

John Ruggles offered up the location of the gold to the angry mob in exchange for their lives, but the mob was having none of it. They hung the brothers from a tree in town and let them swing for three days – a warning to potential thieves not to try such foolish things.

The Location of the Lost Gold Coins

As far as we know, no-one has located the gold coins stolen by the Ruggles brothers. Many treasure hunters have tried to find it with metal detectors, but to date there has not been any claims that it has been found.

Most believe that it is probably located somewhere near the original robbery along the stage road following Middle Creek. It is possible that John Ruggles could have moved the coins between when the robbery took place and when he was arrested, but did he?

Gold coins valued at $5,000 would weigh a considerable amount. It isn’t likely that he would want to move it a great distance. Plus there is the danger of being seen… I would suspect that he cached the treasure a relatively short distance from Middle Creek.

Next: The Lost Humbug Creek Gold Mine in Siskiyou County