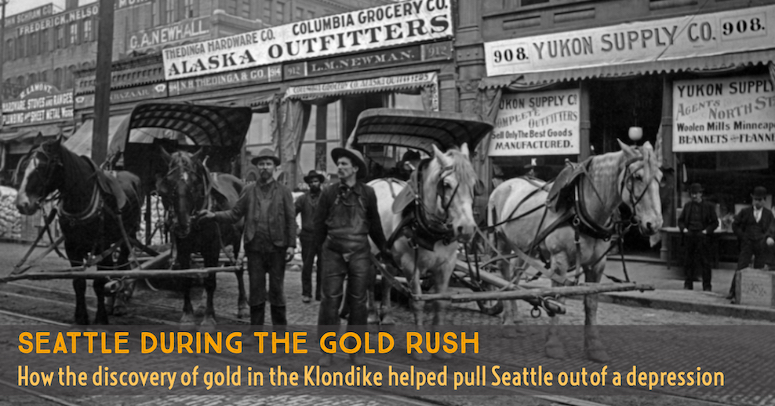 Seattle is also known as the Emerald City, but if there was any rare mineral that put this city on the map it has to be gold.

The gold rush to Alaska had a direct impact on the development of several of the port cities along the Pacific Ocean. Seattle in particular was geographically situated to serve the needs of Alaska. This was a time when Alaska was still unknown frontier, and men were risking it all to strike it rich.

How it started and what were the consequences of the gold rush? At a time when the United States was in a major economic depression, the Klondike Gold Rush helped Seattle rise as the premier cities on the West Coast. Let’s take a look at this pivotal point in history:

The World Descends on the the Klondike

The Klondike gold rush was a major economic boom, one that was especially welcome after the Panic of 1893. This was long after the California Gold Rush; in fact the discovery of gold in Alaska was several decades after most of the gold discoveries had been made in the United States. There weren’t a lot of miners left at this point in history, and most men had moved on to other ventures. The golden era of the United States was thought to be over.

In the late 19th century, word of a rich gold strike got out. Within the first year, over one hundred thousand or more prospectors migrated to the Klondike region of the Yukon. This region is located to the northwest of Canada near the Alaskan border.

Getting to the Klondike was no easy task. Hopeful miners had a few different options, but most of them made their way to either San Francisco or Seattle. They would load up with supplies, get on a ship and head north to Alaska. Once they arrived, they would either attempt the treacherous journey up the Yukon River, or take one of the overland trails into the Klondike goldfields.

More than one hundred thousand miners and prospectors tried to change their fortune, but less than half of these people made it to their destination. It is estimated that only around 40,000 people actually arrived at the goldfields. And only a small percentage of them actually made any money from gold mining… most of the richest ground was already claimed by the time they arrived.

The main reason for the challenges was the harsh weather, mountains, and remoteness of the goldfields. The Canadian authorities required each man to carry a one-year food supply with them. Most of this was bought at the beginning of their journeys. 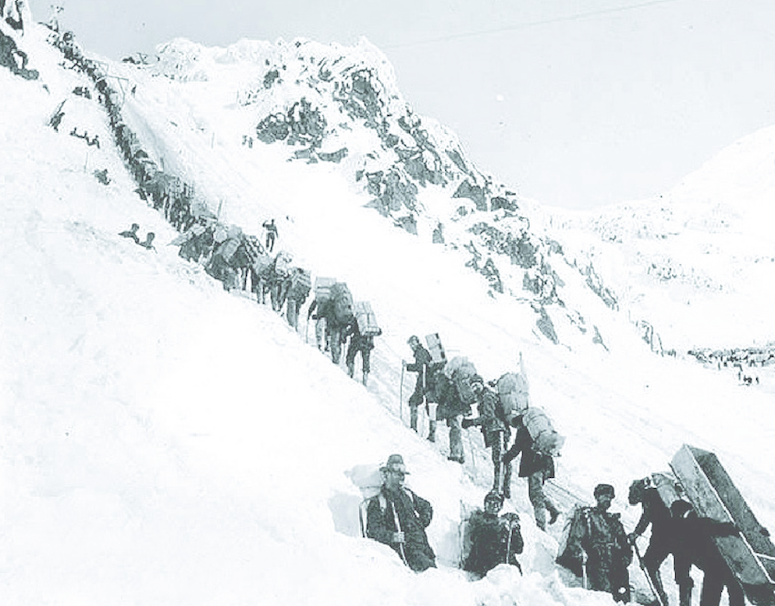 Miners packing gear over Chilkoot Pass on their way to the goldfields of the Klondike. Much of the gear they are carrying on their backs was purchased from suppliers in Seattle.

Impact of the gold rush on the economy of Seattle

It wasn’t just the discovery of gold that stabilized the economy of Seattle and Alaska; some associated businesses flourish at the time of gold rush which caused a sudden uplift to the economy of this region on the following ways:

Gold Built a Foundation for the City

Today, Seattle is the largest city in the Pacific Northwest, and remains the main shipping port to supply the state of Alaska. Amazon, Boeing, Microsoft, IBM, Google, and Alibaba are all headquartered in Seattle.

Would these major industries be located in Seattle if not for the Klondike Gold Rush? The location of the city is certainly advantageous for shipping and general commerce. Certainly the city would have flourished eventually, but there is no doubt that the gold rush to the Klondike helped establish the city as a major economic powerhouse in the United States.

Next: SS Islander – Ship Carrying Millions in Gold Discovered off the Alaskan Coast