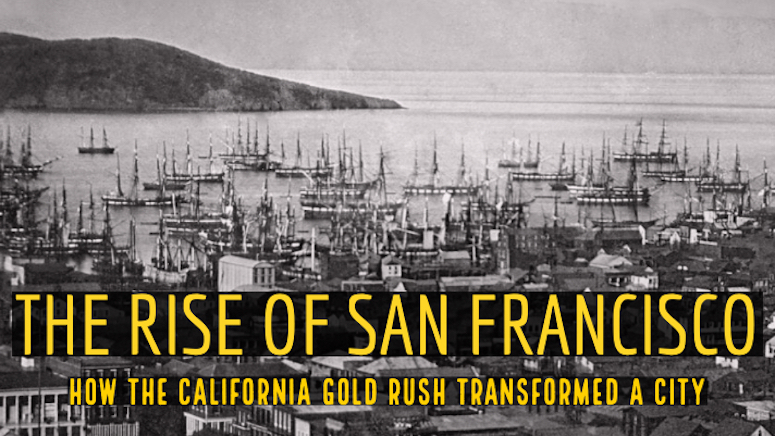 San Francisco is now one of the most famous cities in the USA, but at one time it was just isolated little village on the bay. That all changed with the rise of the California Gold Rush, when thousands of men poured into California in search of the elusive yellow metal.

San Francisco became the city of opportunities, and good fortunes could be made to skilled entrepreneurs. It is a fascinating story for those who find interest in early history.

Prior the the start of the gold rush, San Francisco was then known as “Yerba Buena” came under the rule of Mexico. Some of the infrastructure and architectural development was seen during that time in the city. Commodore John D. Sloat claimed the city for the United States in about 1846.

Mexico surrendered in the Mexican-American War and handed over the city to America. It was then named as San Francisco, but because of its uncongenial geography, never gained importance on cultural and financial grounds until the gold rush led this city to the heights of development in all the areas of life.

The California Gold Rush was the mass migration of thousands of miners to the Sierra Nevada Mountains.

In the middle of the 19th century, just after the end of the Mexican-American war, rich gold deposits were discovered by James W. Marshall at Sutter’s Mill in Coloma, California. This news was soon the talk of the town, and within no time, thousands of gold seekers rushed to the place where gold was discovered.

While this was certainly a transitional time for the many towns that popped up throughout gold county, it also brought attention to San Francisco. Men arrived from all around the world to the ports at San Francisco where they bought supplies for their future journeys into the heart of California.

This gold hunt attracted hundreds of thousands of men over a period of just seven years from 1848 to 1855. These people lived in America and all over the world, but not all of them were lucky enough to find gold. This sudden rush of people in the state led to a sudden increase in the economy of the country and also in the population of the region.

Read: Levi Strauss Makes a Fortune in the California Goldfields

During the California gold rush, San Francisco was the largest city adjacent to the goldfields. Out of all the people coming from outside of America, half arrived through lands of California. So, people coming from around the world found shelter and food from here. This opened up the business opportunities for the local people and numerous hotels, restaurants, saloons and suppliers. They opened at an exceptional rate as more people poured into the city.

It is estimated that the population of San Francisco raised from 200 in 1846 to 36000 residents by the end of 1851. As a result, a tremendous number of roads, towns, churches, schools, and markets were opened in the city and led to the state constitution in 1849.

San Francisco went from being a thinly populated territory to having its first 2 Senators, and one was the nominee for presidential elections in 1856. San Francisco then never looked back in terms of commercial development. 1869 saw the building or railroads which connected the city to eastern states of the country.

Dry good business was opened soon after, and Domingo began manufacturing chocolate in the city. China town quarter was built in the same era. In the same decade, Asians began to migrate; cable cars were introduced, public parks like Golden Gate Park were built, theatres and other hallmarks of civic life were quickly built in the city. The military installation was made possible, and by the end of the 19th century, San Francisco was already a major city very famous for its hotels, classic parks, state of the art buildings.

After the Gold | An Established West Coast City

The present-day standing of the city as a financial capital began soon after. The stock market, banking, and numerous businesses opportunities resulted in an explosion of new jobs drawing many people to the city. In recent decades, the internet brought more commercial popularity and prosperity in the region.

Now the city of San Francisco is one of the largest economic engines in the entire world. Just remember, it all started with gold.