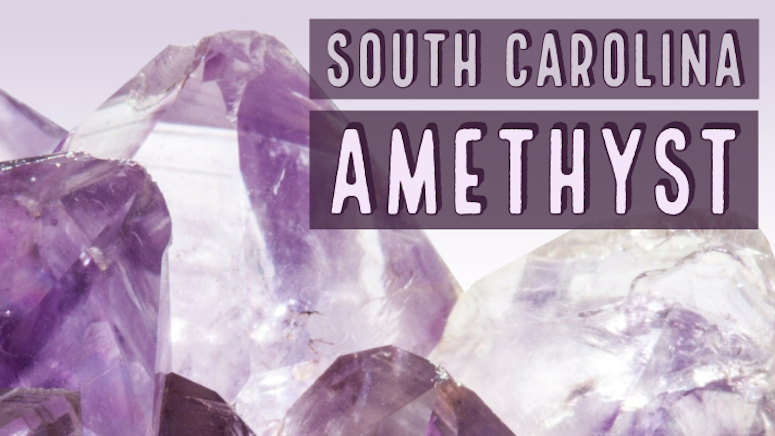 The state of South Carolina is a rich source for a wide variety of fossils, gemstones and minerals.

The Appalachian Range is responsible for some of the better rockhounding locations. We have already documented the many areas where you can find gold in South Carolina. And we know that there are abundant fossils from ancient sea beds that cover much of the eastern half of the state. Searching along riverbanks and coastlines can produce some interesting finds.

Today, we are going to discuss one of the most highly prized gemstones found in the state. There are a wide array of different gems found within pegmatites in South Carolina including beryls, tourmaline and other varieties of quartz. One of these quartz varieties is gorgeous purple amethyst. These spectacular crystals are found in large clusters and are perhaps the most beautiful natural treasures that you can find here.

Amethyst is among the most popular minerals or gemstones for mining in this state. It is basically a variety of quartz and is violet in color because of the presence of impurities like iron and other transition metals.

Amethyst generally does not contain large crystals and does not take huge shapes, but in some select locations there are indeed some large, exceptional specimens being dug. Its crystals are present in a variety of shapes and sizes and are frequently found in pegmatite dykes within the Appalachian Mountains throughout the state.

Amethyst is a semi-precious stone and is a favorite with jewelry makers. It is also one of the birthstones and is easily one of the most popular stones for gem collectors.

Amethyst became the official South Carolina gemstone by a law signed by Governor Robert McNair on June 24, 1969. The main reason behind this legislation is obvious; South Carolina is home to some of the world’s finest amethyst.

There is a good number of active mines in South Carolina especially famous for amethyst. We will get to know about these mines one by one. It is worth noting that not all amethyst locations are currently being mined. With extensive research you will realize that there are many inactive gem mines scattered throughout the state. Some of them are now “worked out,” but others will likely still produce if you can gain access to them.

Let’s take a look at the list of some of the most common and famous gem mines in S.C.

Ellis Jones mine is one of the very old and amethyst rich mines in the South Carolina. In 1965, this mine produced one of the best amethysts in the whole of the United States. It was quite huge and weighed almost seven kilograms with a rich purple hue. Some of the precious and high-quality amethysts from this mine have been displayed in the National Museum of Natural History in Washington, D.C.

Ellis Jones mine is still famous for fine quality amethyst and also some other varieties of quartz. Geological surveys and studies have shown plenty of amethyst still present in this mine, but it is not currently open to the public.

And: Rockhounding Tools – Rear that all Mineral Collectors Should Have

This famous amethyst mine is located in the upper part of the state of South Carolina and is located in the Appalachian Mountain Range, one of the oldest mountain chains in the world. Naturally, good quality minerals and stones are expected from this area.

Remember that amethyst is simply one variety of quartz, and the Diamond Hill Mine also produces a wide array of different quartz varieties too. High quality smoky quartz, skeletal, angle-plated, iron & manganese oxide coated crystals, and other unusual varieties of quartz are found here.

Other minerals including beryl, garnet, and epidote have also been recovered from this mine. All of these minerals are of fine quality and demanded all over the world.

This is one of the few public gem mines operating in South Carolina. Prices are very reasonable and a great opportunity for kids and “grown up” kids alike!

There are many areas throughout the state with documented amethyst occurrences. Many of these locations are old quarries that were primarily focused on stone and rock. Crystals were merely a by-product and were easily obtained from the waste piles.

These locations are actually somewhat abundant throughout the state. Quarries throughout Abbeville, Aiken, Anderson, Cherokee, Greenwood, Laurens and Union Counties have been known to have quartz and other gems.

Access is the biggest challenge. Due to the dangers and liability of allowing the public into quarry sites, most of them do not allow public access. 88% of the land in South Carolina is privately owned, so most of the best rockhounding site will require permission. This is the case with most states in the South. There are some public collecting sites out there, but you have to do the research to find them.

There are certain spots in South Carolina which allow public mining and camping. Some of these spots offer free mining, but some may charge for camping and mining. If you are interested in getting your kids or friends to an adventurous camping trip with some mining, Diamond hill mine is a very good choice. The good thing about this mine is that it allows free camping nearby.

There are a few other businesses that offer a mining “experience,” but this simply involves buying a bucket of paydirt and sifting through it to look for gems. This can be a fun option for the kids, but it’s not true mining.

For several true gem mines, consider a trip up to North Carolina. There are several good mines up there as well, for both gold as well as gemstones.