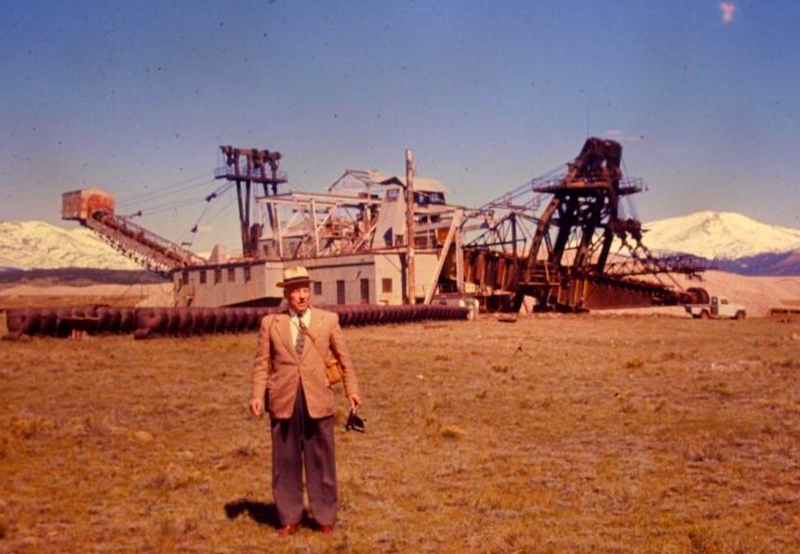 The town of Fairplay was established in 1859 when miners discovered rich placer gold deposits along the South Platte River. When news of gold in Colorado broke out in 1859, many miners from different places flocked the area in search of a fortune. Many of these miners settling on the Rockies but quite a few decided to look elsewhere when they could not find sufficient gold keep them there for long.

Most of these new arrivals were not allowed to settle at Terryall as the early settlers wanted to protect their mining claims. These new group of arrivals finally discovered gold on the South Platte River and established their own town which they named Fairplay.

Within months the town was booming with business as miners in the nearby rivers and creeks settled there and many others kept arriving. 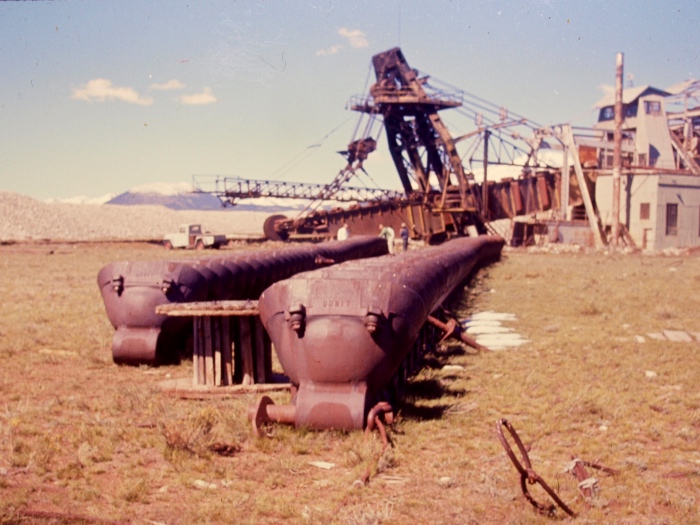 The buckets of a dredge work very much like the chain of a chainsaw (obviously on a much larger scale). The huge cast iron buckets would scoop up gold bearing gravels and bring them inside the dredge for processing.

Gold was discovered in Colorado more than a half a century before the gold rush of 1859 took place. In 1806 Jim Pursley, a Kentucky trapper discovered gold in the new lands in the area of what is now the South Park and reported to Zebulon Pike about his findings, but Pike was too busy mapping the newly acquired lands and preparing a report for President Thomas Jefferson to take notice.

The gold remained in the ground for the next fifty years until 1859 when a group of local prospectors discovered gold nuggets in the ground near the area that was soon to be the city of Denver. This discovery created a buzz and in turn, triggered a major gold rush that brought in tenths of thousands of miners and prospectors seeking to find some rich gold. Within several months the population of Colorado had grown from a few hundred indigenous people and a number of newcomers to over 30,000 people.

The area proved to be quite rich as gold was discovered in creeks, rivers, and streams all throughout the state. Soon the new arrivals began to set up towns. Many of these newcomers where business people who established stores, saloons, hotels, and brothels to serve the needs of the miners who were flocking to the area. It was during this time that the town of Fairplay was established.

The early settlers in Fairplay were primarily focused on placer gold which was easy to miner using simple tools such as sluice boxes and rocker boxes. In the first few years of the gold rush these were the primary methods used to recovery gold in the area.

However, as time progressed the placer gold deposits slowly exhausted and quite a few miners were forced to move to other places in search for new gold deposits. This led to the discovery of the Snowstorm placers a few miles from Fairplay. This renewed interest in the area once again.

Mining continued at this deposit until the early 1890s when the placer deposits were fully exhausted. Quite a few miners left. Then in early 1900s, hydraulic mining was introduced and this renewed mining efforts all around Fairplay including at the Snowstorm Placers where the Snowstorm Hydraulic Company set up operations in 1902.

Hydraulic mining continued until World War I interrupted mining as the demand for gold dropped because of the war. 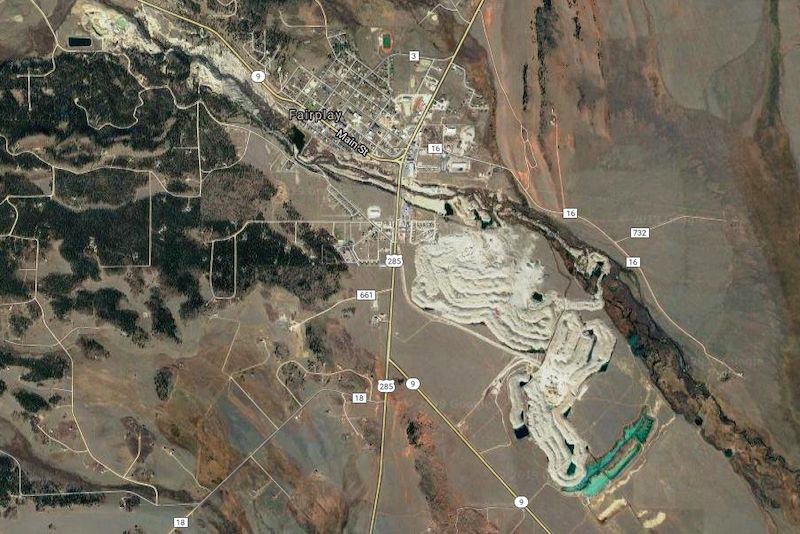 This aerial photo shows just some of the dredge tailings from the historic diggings on the South Platte River. These tailings also extend up toward the town of Alma.

In the early decades of the 1900s there was only limited gold mining activity in the Fairplay area. The gold that could be easily accessed by placer miners was long gone, and only a few miners remained.

This changed after the Great Depression, when hard economic times renewed the interest in gold. By now, there were many bucket line dredges operating throughout the West, and the gravels of the South Platte River were next. A number of gold mining companies considered setting up their own dredges.

The photos in this article were taken during the construction of the Fairplay Dredge, which was setup southeast of Fairplay in 1941. It was the largest dredge in Colorado, with over 100 buckets! It could process 15,000 yards of gold-bearing gravels per day and reach to a depth of over 100 feet.

The dredge only operated for one year until the start of World War II. It then ceased operation as did most non-essential mines during the war. It restarted operations in 1945 and continued until 1952.

This wasn’t the only dredge to work the gravels along the South Platte. One only needs to visit the Fairplay area to see the extensive dredge tailings that still remain from the extensive workings. 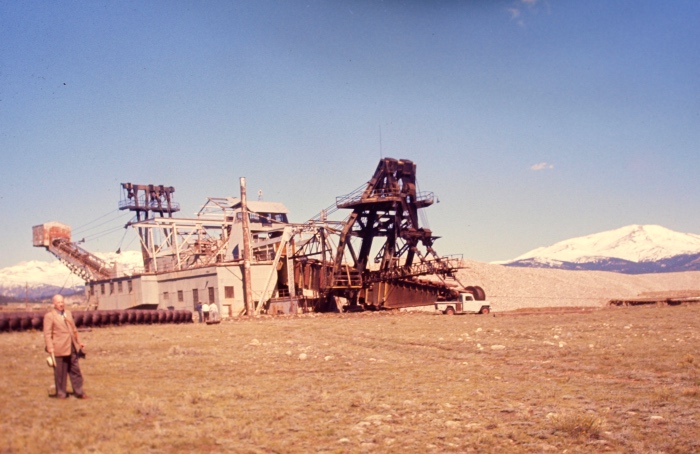 During the mid 1900s there were several large dredges working the gravels along the South Platte River. The richest grounds were between Alma to Fairplay. This photo shows the on-site assembly of one of the dredges constructed by the Yuba Dredging Company.

The Fairplay Dredge wasn’t the only one working the gravels of the South Platte River. In fact, the only intact dredge left in Colorado (most dredges were salvaged for scrap after mining efforts were done) is called the Snowstorm Dredge. It was built by the Bodinson Manufacturing with the parts being built in San Francisco before being shipped to the site where it was assembled.

It operated from 1941 to 1948, though it was also shut down during the war. It was again used as late as 1976, though it was used as a stationary wash plant rather that a fully functional dredge.

Today this dredge is one of the most intact bucked dredges remaining in the United States, but it is currently sitting on private property and not visible to the public. There have been efforts at preservation in the recent past. Some funds were even raised and a site was found to relocate the dredge, but the current owners adjusted their asking price from $65,000 to $2 million dollars, the plan was stalled. 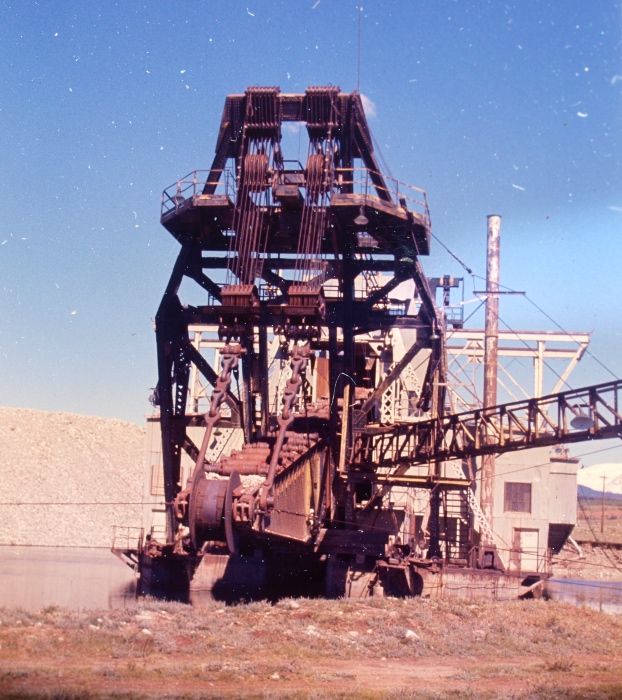 The “working end” of this bucket line dredge could dig gravel to a depth of 105 feet. Cast iron buckets would dig gravel and bring them inside the dredge where a trommel would separate out larger rocks and debris. Smaller gold-bearing material would then be run through a large sluice to capture the fine gold particles. Barren waste material was discharged out of the back of the dredge in tailing piles that are still evident today.

While the heyday of mining may be long over, Fairplay has actually gotten quite a bit of interest in the past few years. The popular Gold Rush television show was based out of Fairplay. This operation stirred up a fair amount of conflict with the locals in the areas, although the mayor was welcoming to the miners.

Of course there is still plenty of gold left to find in the South Platte River that flows through town. An area has been set aside where casual prospectors can pay a small fee and access over 1/2 mile of the river as well as many of the old dredge tailings along the river. Fees cost $10 for a day pass or $100 for an annual pass that will allow you to pan and sluice. This is an excellent opportunity to prospect an area without needing to worry about accidentally going onto private lands or mining claims.

When you are done prospecting, be sure to explore the early structures in FairPlay that date back to the early days of the gold rush. The 1874 built courthouse and church still stands for visitors to this historic town to see. There also other structures to be seen such as the Buckskin Joe cemetery and several other early structures. The town caters to tourists and there are a lot of fun things to do and see in town.