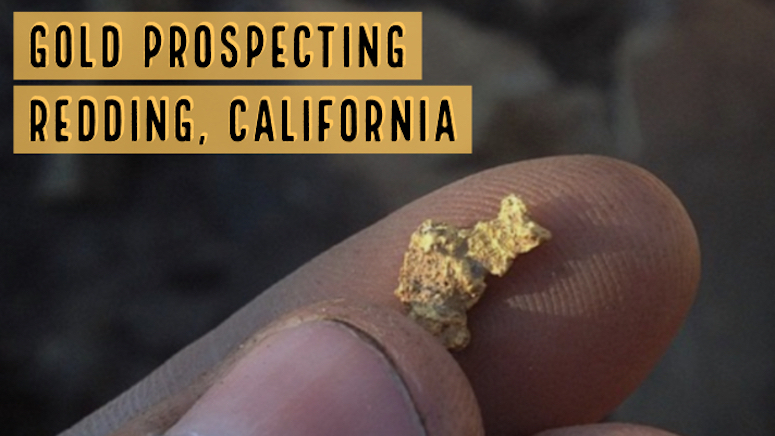 The gold discoveries around Redding were easily overshadowed by other gold strikes in California, but that doesn’t mean they are any less significant. Yes indeed, there is still plenty of gold waiting to be found by hard working prospectors in the hills around Redding, California.

There is a lot of open ground available for gold prospecting in the hills just outside of Redding. In fact, I would consider it to be one of the better locations in the entire state simply because there is so much open ground to explore.

Perhaps the biggest challenge for prospectors is actually finding open ground with gold that you can prospect on. California probably has more gold-bearing ground than any other state in the USA, but a high percentage of it is already claimed. It is essentially off-limits for prospecting unless you can get permission from the claim holder.

Redding has some good areas to prospect that you won’t have to worry about being on someone’s claim. I’m not talking about Forest Service or BLM land. Yes there is plenty of that… but there are also some specific areas that are set aside for public access which allow prospecting and other recreation activities. Some of them area located on very rich gold areas with extensive gold mining history. These are areas that (for a variety of reasons discussed below) do not allow mining claims to be filed. This mean thousands of acres of rich gold-bearing ground is open to casual prospecting!

Just southwest of Redding is Clear Creek, which is a great place to do a little panning or sluicing. Several miles of the creek runs through the Clear Creek Greenway, which is open to the public and has good road and trail access. This area is managed by the BLM, but miners cannot file mining claims here, which means anyone can prospect without worrying about being on someone’s claim.

The earliest mining camp along Clear Creek was at a place named Horsetown. It was a central mining hub for the area from the years 1848 through 1860. There was active hydraulic mining here at one time with up to 15 hydraulic giants washing away the low hills around to townsite. Early reports stated that individual miners that sluiced the gravels in the area could recover anywhere from 1 to 5 ounces of gold per day.

If you visit this area today you will see plenty of evidence of the early mining activity in the area. Large hydraulic pits are quite evident as well as several ditches that were dug to supply water to these operations. In later years the dredges came in and worked the gravels along Clear Creek.

Note: Bucket dredges operated around Reading Bar all the way down to the confluence of Clear Creek with the Sacramento River. The largest dredge field is just north of where the Clear Creek Road intersects the main highway. This is on private property. 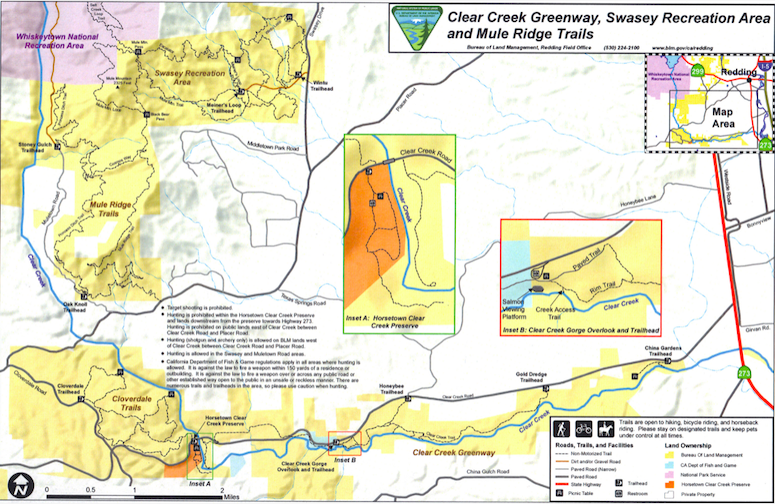 This is another large section of land available for prospecting just west of Redding. Clear Creek flows through a small section on the east side of the Swayze Recreation Area, and it also covers many other small drainages coming off of Mule Mountain and countless dry gulches that contain abundant gold.

Since this area has been set aside as a place for recreation, there are many trails that run throughout that provide good access. If you are serious about finding gold through, I would suggest you plan on doing a bit of “bushwhacking” to access some of the harder to reach areas. Manzanita grows thick and you will also run across plenty of poison ivy. Be prepared.

Metal detecting is a favorite method to use here. Scan bedrock using a sensitive unit like the Minelab Gold Monster 1000 and recover small gold that the old-timers missed. At the time of the original Gold Rush, a miner wasn’t interested if he couldn’t recover at least 1-ounce of gold per day. Some places that are still quite rich by today’s standards were basically untouched by the early miners.

Since Shasta Dam (and the much smaller Keswick Dam) is so close to Redding, there is a lot of nearby lands that are managed by the Bureau of Reclamation. Most BOR lands are open to the public for general prospecting, but you cannot stake a mining claim on them. Once again, this provides thousands more acres in the Redding area where you can search for gold without worrying about mining claims.

You will find a lot of this land along the Sacramento River between Redding and Shasta Dam. There is good gold in this area. Metal detecting is productive here, but much like the Swayze Recreation Area, you can expect a lot of heavy brush to contend with.

The easy spots have already been hunted pretty hard. Get off the beaten path will be productive.

Note: The Iron Mountain Mine is located above the Sacramento River about 10 miles northwest of Redding. There is gold around this area, but I would highly recommend that you keep away from any water that drains from this area. This is a Superfund Site that discharges extremely acidic mine waste. It is one of the most toxic sites in California. 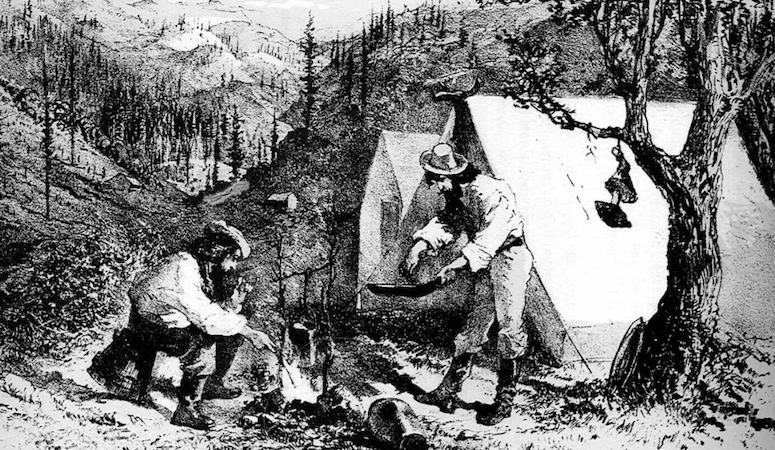 Please be aware of some very restrictive rules within the Whiskeytown National Recreation Area. Despite the rich mining history within the areas surrounding Whiskeytown Lake, you will get in big trouble if you do much of any prospecting within this so-called “recreation area.” All metal detecting is off-limits. Basically all hand tools, shovels, sluices, etc. are illegal and strictly enforced. I believe you can still use a gold pan, but without the use of other tools this is essentially worthless to anyone serious about finding gold.

Personally, I wouldn’t even set foot within the Whiskeytown area if I had any prospecting gear with me. There have been people caught doing some casual mining in the areas before and they faced very stiff penalties for it. I don’t recommend it. There are plenty of other areas to try.

You don’t have to travel far to get into the gold. Northern California has always been known for having rich pocket gold deposits, and in the Redding area most of these were found at lower elevations closer to Redding and along the Sacramento River. The gold deposits that have been found throughout Shasta County are truly extensive. Sometimes you can study old maps and aerial photos to locate these early “diggin’s,” but often it just require boots on the ground to find them.

There are a lot of old pocket mines in this area, and if you do your research you will have no shortage of places that will be interesting to explore. Literally thousands of creeks, gulches, abandoned mines, pocket diggin’s and even virgin gold-bearing ground area out there to find. 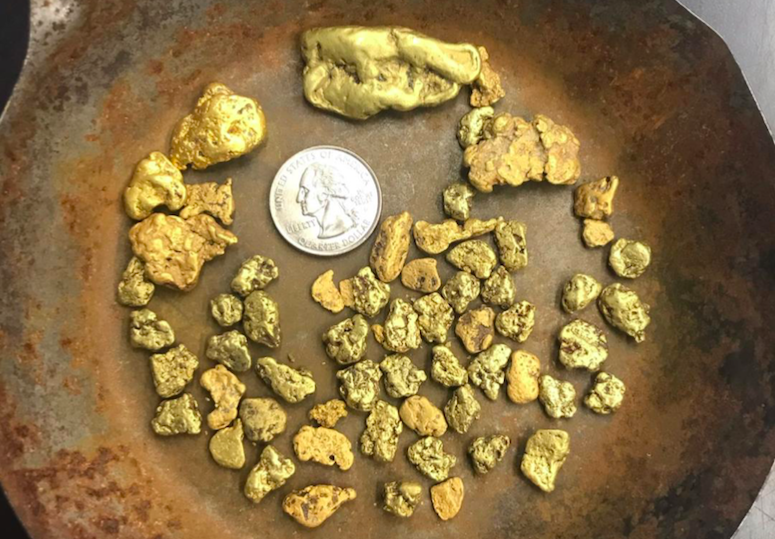 Heading North on I-5

It is worth mentioning that there are plenty more areas within a relatively short drive that might also be worth trying. After all, there were thousands of mines all throughout Siskiyou, Trinity, and Shasta County. As you head north on 1-5 past Shasta Lake you will get back into some rich gold country. Dog Creek, Slate Creek, Boulder Creek, and numerous others that drain into the Sacramento River all contain decent placers.

Yes there is some private ground and claimed Forest Service lands to be aware of, but there is lots of open ground too. It will just take some research to find a spot.

Drop over into the Trinity River drainage and you will have even more country to explore. The goldfields are so extensive here that it would be exhausting to list them all. There are so many rich areas within an hour or two of Redding, you will couldn’t explore it all in a lifetime.

Also Read: Finding Gold on the Klamath River & its Tributaries

And: Weaverville, CA | Gold Miners Rush to the Trinity Alps