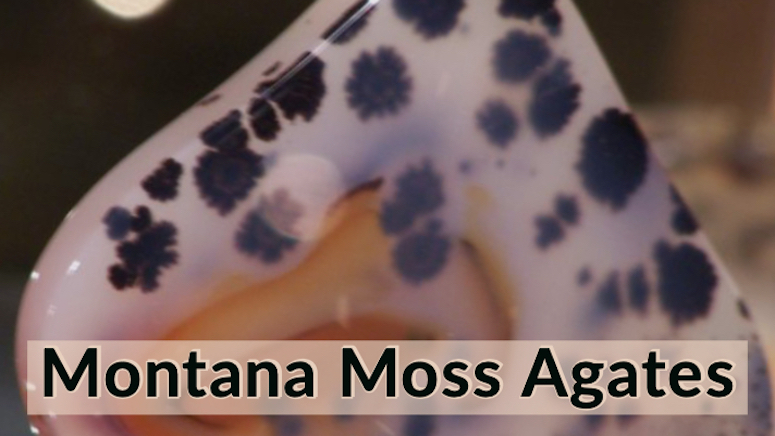 The mountain ranges in Montana are enveloping breathtaking beauty and immensely mesmerizing views of the valleys and rivers. They are home to some amazing treasures. Today we are going to talk about one of the states most famous stones, the beautiful moss agate.

Various form of agates are common throughout the United States, with different locations having agates with different features. The moss agates that can be found in Montana are unique to anywhere on Earth. Their distinguishing characteristics make them a true prize for rockhounds. The look amazing in their natural state, and can be cut and polished to bring out even more of their beauty.

Moss agates are somewhat different than most, because they do not exhibit the concentric banding that are so abundant in most other forms of agate. They are clear with fascinating plumes of color within the stone which resembles moss. The patterns that appear in the stones look like filaments and threads and are green in color just like moss.

As with all forms of chalcedony, they are formed as nodules in the cavities of igneous rock. Weathering exposes and releases veins of agate within rock, which the erodes and makes its way to waterways where additional erosion can occur.

The Great Powers of the Moss Agate

Several Native American tribes used moss agate for jewelry and art long prior the the arrival of the first Europeans to the New World. Moss agates had a great value, and they were considered a “power stone.” The hard material could be used for making arrowheads and was often carried by elders and medicine men for use in ritual.

Native Americans used to keep the moss agate as a “stone of the warriors” as they believed victories are the blessings of mother earth due to these Montana moss agates.

Montana is aptly termed as “treasure state” for the presence of precious and semi-precious stones. Moss agates are among those treasures. Apart from plenty of moss agates, the mountain ranges of Montana also contain gold, silver, sapphires, platinum, and even some diamonds. A wide array of semiprecious materials like agates are also present. Montana is most certainly a rockhounding paradise!

Moss agates that are not specifically found in Montana. Agates with moss-like formations can be seen in many places around the world, but the unique characteristics of those found in Montana are unlike anywhere else. Experienced rock collectors can spot Montana agates right away.

Where to Find Moss Agates in Montana

Abundantly available, Montana moss agates are widely spread over much of the state. A very interesting fact about the moss agate deposits is that they do cover a large area, but they are not present in bulk in any single spot. This makes it difficult to mine the material as one might do with gold or other gemstones. Successful agate hunting requires a lot of time spent exploring and careful search.

The Yellowstone River Basin that flows across the eastern part of Montana is the place to start your hunt. The Yellowstone River is the most popular place to hunt for moss agates. The productive are covers several hundred miles along the river. The most productive stretch is from east of Billings. Anywhere along the river from Custer to Sydney will turn up nice moss agates.

Agates can even be found farther east, and the occasionally turn up as far east as North Dakota. Do any amount of agate hunting and you will find that there are a variety of different types of moss agates. Different locations will turn up different colored materials, making each piece just as exciting to find as the last one!

There are a few different things to keep in mind if you want to be a successful agate hunter:

1. Agates can be found throughout the year, but you will have the most luck if you are the first person to explore a gravel bar. Summer is a great time to be out looking for new agates that have been exposed.

2. Not all agates are created equal. Some pieces will show spectacular characteristics that make them top-shelf material to use for jewelry. Others will be drab, boring pieces worth leaving where they are.

3. Some exceptional moss agates won’t look like much at first. They can be fairly boring from the outside and you will need to expose the inside to see what you’ve really got.

4. A good rock hammer is worth carrying, but if you suspect that you have a true high quality piece, you should bring it home and cut it with a rock saw or put it in your rock tumbler. Don’t risk ruining a good piece.

5. Drought years are particularly good for agate hunting. Get out there and explore along large gravel bars that are usually covered with water.

6. Don’t be afraid to try different areas and hunt places that most others overlook. This includes the creeks and small tributaries that flow into the Yellowstone River. Anywhere gravels are exposed is worth checking out.

And: Fairburn Agates of South Dakota

Montana moss agates are semi-precious stones and are widely used in jewelry making. They are one of the most popular materials used by jewelers in Montana. Lower quality pieces are often sold in the rough to tourists, but nicer pieces are generally cut into cabochons and used for pendants and earrings.

Most serious rockhounds also do lapidary work. If you are just a casual rockhound but you want to do something fun with your moss agates, you can buy an inexpensive rock tumbler that will polish up your finds and help expose the beautiful “mosses” hidden within.

Large pieces of Montana moss agate can also be used for carvings. This takes a lot of equipment and experience. These pieces are commonly sold to tourists who come to visit Yellowstone National Park and the surrounding areas of Montana.

Exploring Montana? Check out these other articles about Gold, Gems & Treasure!

7 Rivers in Montana that are Full of Gold!

Where to Dig for Sapphires in Montana

Copper Mines of Butte, Montana: The Richest Hill on Earth