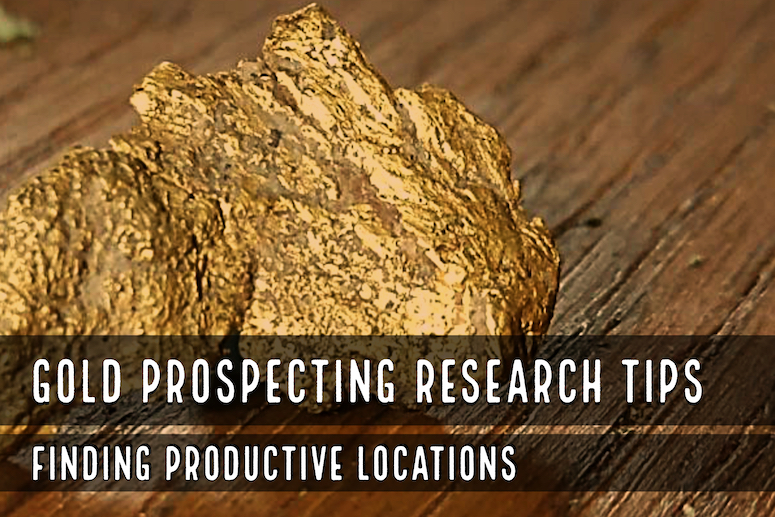 Gold is one of the rarest elements on the planet. Only a tiny percentage of ground has any significant quantity of gold. I suppose that is the reason it is currently valued around $1500 per ounce!

If you like to metal detect for gold nuggets like I generally do, then we are talking about an even smaller percentage of areas that are going to be productive. Places where you could potentially swing a metal detector and find a gold nugget is way less than 1% of the landscape (In truth, it’s probably closer to .01%.).

If you are new to gold prospecting and you want to have a fighting chance of actually finding gold, then you are going to need to find a place where there is some gold to be found. If you just wander out into the hills aimlessly and think you are going to get lucky, I can assure you that you’d have a better chance of finding a needle in a haystack. You need a plan.

The research process starts at home, before you ever set foot in the field. You need to decide where you want to go. But how do you start?

You start your research by thinking broadly, then narrowing down to a specific area the further you get into the process. I’m going to show you exactly how I do that.

Odds are you are going to want to look for an area that is relatively close to where you live, so you first want to find some information on the occurrence of gold in your state.

The first step is to find some information on historic mining activity in your state. Fortunately there is a lot of good general information out there. Any state that has a history of mining will have at least a book or two written about it. Assuming that you live in a state with gold, a quick search on Amazon should result in at least a couple books about mining in your state. This will get us started with some good general info.

Any general book that covers the entire state is great because you can identify regions that are worthy of further attention. A decent book like this will mention specific mines, rivers, and creeks where mining activity has taken place. Remember that anywhere that gold has been mined in the past still has great potential for the modern day prospector. 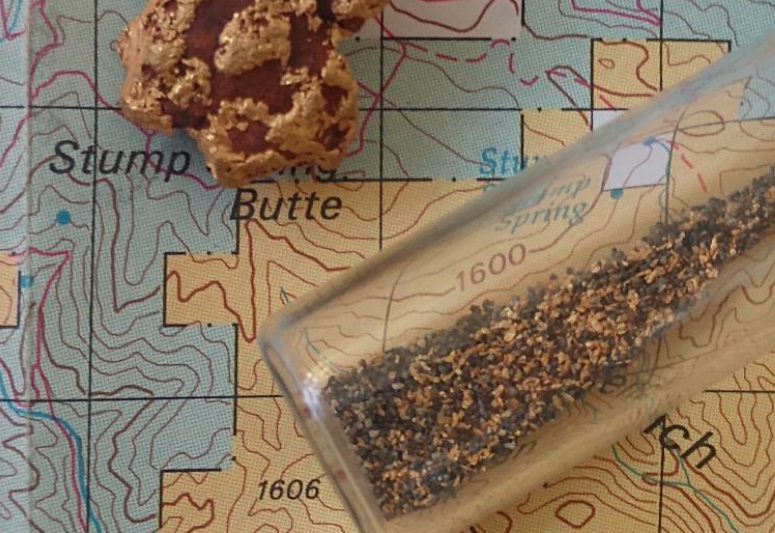 Narrowing Down a General Area

Ok, so now it’s time to find a general area that we want to prospect. If we were looking for a place to find gold in Oregon for example, we would soon realize that most of the gold has generally come from two distinct regions. One area is in the Blue Mountains of Eastern Oregon, and the other is the Southwest corner of Oregon, just above the California border. So those are the places to focus.

Don’t waste time on areas that have no historical gold production. If there isn’t a much gold near where you live, then plan on traveling to a location that does. I wouldn’t go grizzly bear hunting in Kansas or shark fishing in Montana. Don’t waste your time looking for gold in places that don’t have any! You’ll come home empty handed and you will lose interest quickly.

So now we have determined a general area we want to do a little prospecting, and even have a few names of different creeks and rivers that interest us. Now we need to figure out if we can get to those areas an actually do a little digging.

Unfortunately not everywhere is open to prospecting. Obviously, there is private land to keep in mind. You can get maps that shows land ownership, or nowadays you can download an app for your phone that shows it. When I am doing research at home I like to use a site called caltopo.com.

You will likely find out that a lot of areas that you wanted to explore are on private property. Unless you get permission you aren’t allowed to prospect here.

Fortunately there is quite a bit of public land in many gold-bearing areas. What you want to look for are federal lands managed by the Bureau of Land Management and US Forest Service. Generally speaking, these lands are open to small-scale prospecting.

One of the best tools for the modern prospector is Google Earth. You can use it to look for old mine ruins and other indicators of past mining activities like stacked rocks and mine tailings. Anything that lets you see the area before you get there will help you narrow down a location to explore. 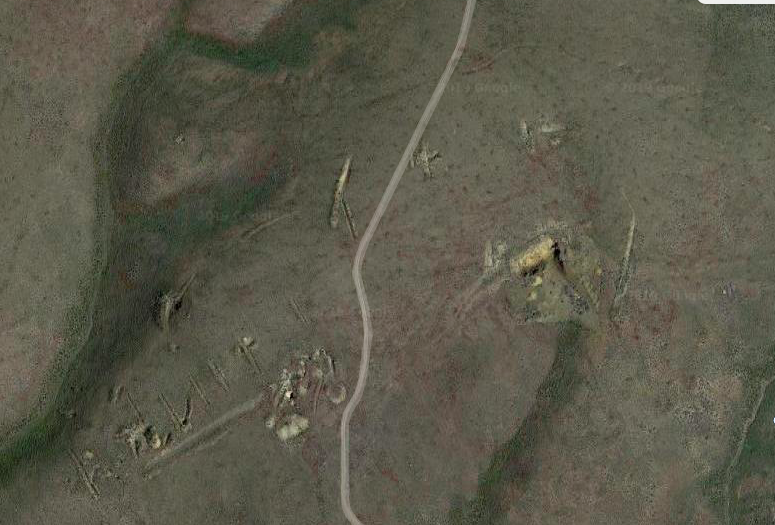 Looking at aerial photos can reveal some interesting things. Here we see numerous old prospects. The straight lines are dozer cuts, where someone scraped off overburden in search of a gold vein. All this past activity is a sure sign that there is some gold nearby. Metal detecting around this area might be worthwhile. Or perhaps hike down and see if there is any gold down in the gulch below. There appears to be no water, but after the snow melts in the spring, there is probably a trickle of water running in that would allow for easy panning or perhaps even a sluice box.Lots of potential opportunities to find gold…

No Prospecting on Others Claims

Here is the next challenge that our new prospector is going to soon find. Mining claims!

You might find a decent location by through research that shows a creek with historical placer mining activity flowing through public land. You load up the truck and go see what you can find.

Upon arrival, you soon finds that everywhere that you thought would be worth prospecting has claim markers. “NO MINING ALLOWED!” All the places that you wanted to go seem to be off-limits.

Mining claims are the biggest deterrent to new prospectors. I wonder how many people have bought a gold pan and headed up in the hills only to get discouraged by all the nasty signs? Claims can be confusing and intimidating for beginning gold prospectors, but really it is just another level of research that you need to learn how to do.

Figuring out where existing mining claims are is not as easy as it should be. In this day and age, I would like to think that the government could provide an updated map showing mining claims that are active, but sadly it doesn’t exist. There used to be a good tool called GeoCommunicator that would clearly show active claims, but it was deactivate several years ago.

Now the best site I have found to do research from home is called MyLandMatters. It is interactive and regularly updated. You can use it do dig deeper into claim status and find areas that aren’t claimed, but you should still check with the local county recorder for the final say on that matter.

I have written quite a bit about mining claims over the years. Here is some recommended reading that will help you understand mining claims a little better.

You Don’t Need a Mining Claim to Find Gold

How to Stake a Mining Claim (8 Steps) 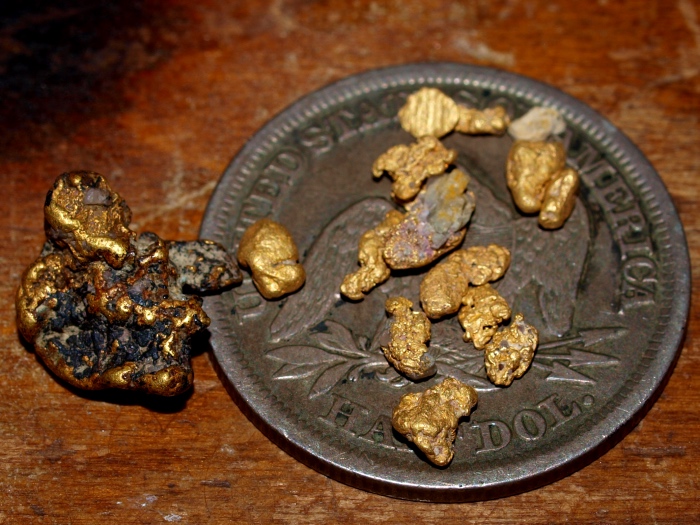 The reality is, some of the known mining areas are going to remain claimed, and you simply aren’t going to find access. On a well-known gold-bearing creek or river, more than likely the claims are going to be renewed every year and you simply aren’t going to find open ground on that creek. You might be able to gain access by contacting the claim holder or by joining a club, but the odds that you will find a piece of unclaimed ground for yourself isn’t likely unless you venture into surrounding areas.

This is where I start to look for tributaries that feed into the main creek. If you are in gold country, there is a good chance that these small tributaries are overlooked. This is especially true if there isn’t good road access. If you have to hike in 1/2 mile to get to the creek that will weed out a lot of lazy people. Your odds of finding a piece of unclaimed ground will increase.

Another tip is to look for dry gulches, seasonal creeks and hillside prospects or lode mines. These often don’t have a name, and it takes more work to find these places. Books often don’t mention no-name creeks or dry gulches. Sometimes you can look on Google Earth and see old “coyote holes” and other things that might indicated historic mining activity. These are great places to explore. If there is no water present and access is difficult, you have a lot better odds that other miners will overlook these areas.

Nowadays, I feel that the best gold left is reserved for those of us who are willing to put in the extra effort by hiking into remote areas. Pretty much everywhere that has good road access to a gold-bearing creek or river is going to have an active claim on it. After the gold pan, I think good pair of hiking boots might be the most important piece of gear for the modern prospector.

Gold is Hard Earned, Now More than Ever

Even for knowledgable and skilled prospectors, gold can be hard to find. It’s not uncommon for someone who is quite capable of finding gold to drive several hours and spend several days and still come home empty handed. The days of pulling ounces of gold from the ground on a consistent basis are long gone.

Finding productive areas to search for gold is more challenging that ever. Gold doesn’t grow back. Yes, it does replenish from time to time due to erosion and natural weathering, but this is a slow process. Whenever someone digs up a nugget or cleans out a crevice, that gold is gone.

Research is more critical than it ever has been. Don’t depend on blind luck or you are sure to get disheartened and give up. There is still gold out there waiting to be unearthed, but you have to put in the time and effort required to locate those rare locations that have not been exploited by other miners.

Next: My Current Metal Detecting Setup for Gold Nuggets