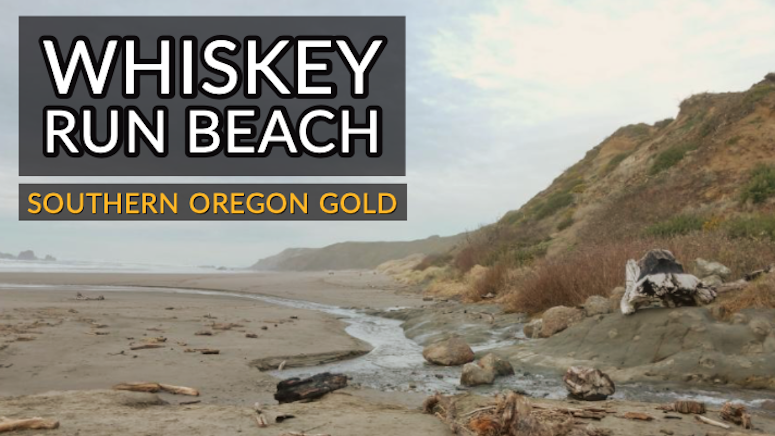 One of the more unusual early gold rushes in the United States occurred on the Oregon Coast, when miners discovered gold deposits in the sand along the Pacific beaches. Not only was there gold scattered within the sand, but there was actually enough of it to be economically mined!

Tiny specks of gold dust were found all along the beaches of Southern Oregon, but the richest sources were found around the mouth of the Rogue River. Many miles of beach in each direction were thick with heavy black sands, and these were the best locations. One of these sites just north of Bandon in Coos County. The beach is called Whiskey Run, and there are still prospectors finding gold there even today. 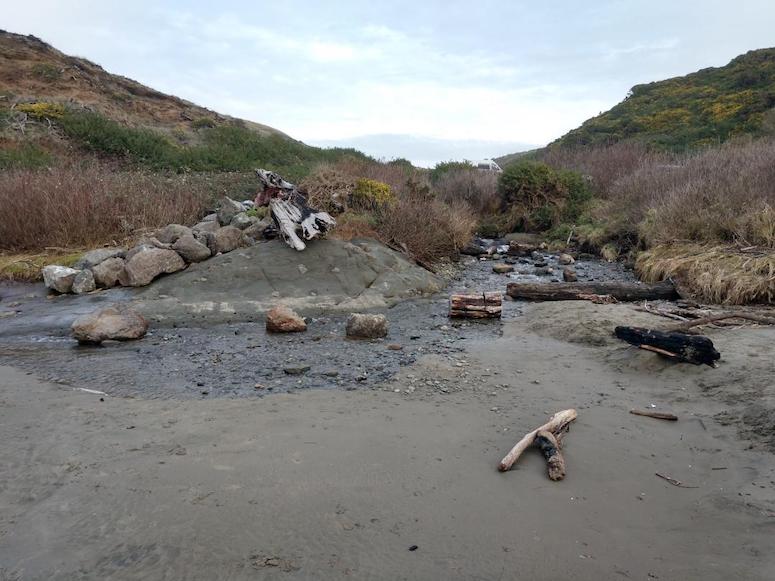 The mouth of Whiskey Run Creek where it flows into the Pacific Ocean.

This was a time of great excitement. The California Gold Rush was in full swing, and more gold regions had just been discovered in Southern Oregon. Placer deposits had just been found on Josephine Creek in 1851. This led to further discoveries on the Rogue River, Illinois River and Althouse Creek and eventually just about every creek and river in Southwest Oregon was being prospected.

The rush to Whiskey Run Beach occurred in 1853. Dark black sand concentrations were discovered at the mount of the Coquille River at Bandon. A few miles upstream was an even richer site at the mouth of Whiskey Run Creek. Good gold could be profitably mined from the beach and by 1854 there were several hundred men panning for gold.

Men worked in earnest sifting the beach sands in search of the yellow metal. The town of Randolph was built at the site to supply the miners which contained a saloon, store and restaurant. It was a nice little boomtown, but it didn’t last long…

In the winter of 1855, a massive winter storm came in and stripped the beach of its black sands. As anyone who lives along the coast knows, the beaches are constantly changing and large storms can bring in huge amounts of sand and strip it away just as quickly. With all of the black sands gone, the crowds of miners moved on in search of new areas to mine.

This was the end of Randolph, but certainly not the end of mining along the Oregon Coast. All up and down the coastline from the Coquille River down to the mouth of the Klamath River a man could find decent gold in the sands.

Whiskey Run was still a viable place to mine. It wasn’t just the easily accessible beach sands that were gold-bearing, but also the sandy stream beds, dunes, and hills up behind the beach also hid layers of black sand.

Years later, there was a hydraulic mining operation set up at Whiskey Run. Sands were washed away and run through sluice boxes to catch the fine gold. This was far from efficient, as the fine gold was easily lost when heavy loads of sand were pushed through the boxes. Nonetheless, these were profitable ventures and enough gold was recovered to stay operational for many years.

In the early 1900s, the Ocean-Beach Gold Platinum Dredging Company operated at Whiskey Run. This dredge operation extracted sands from offshore to be processes on the beaches.

Even as interest faded over the years, there was clearly enough gold to garner some interest and even today you will find a few small-scale miners panning and sifting through the sands in search of those tiny specks of gold.

Gold isn’t the only precious metals in these sands. It has actually been long known that there is also tiny bits of platinum here as well. The quantity of this metal is considerably lower, but it is there.

The tiny size of these micro-bits of gold and platinum cannot be overstated. Nearly all of it is +100 mesh. This fine gold has always been a challenge to recover in good quantities. If you load up too much sand into a sluice box it will “blow out” all gold. You have to feed small amounts of sand and have a very good setup to get good recovery.

I would suggest anyone who is interested in finding some gold at Whiskey Run beach or anywhere along the Oregon Coast, consider getting in touch with one of the local mining clubs. They will have some details on good equipment and techniques that you can use to successfully prospect for this fine gold.

If you decide to come and do some prospecting then the time of year can make a difference in how much gold you will find. The beach is constantly changing and even one storm can make all the difference. Often in the spring and summer, you will find that north winds bring in the light blonde sands that contain virtually no gold.

As the winter arrives more storms will come in from the south and you will find more exposed black sands on the beaches. You can certainly prospect all year, but you will usually have better luck in the winter. The denser the black sand, the more gold.

You can still prospect at Whiskey Run beach at the very same site that the first miners did. The entirety of the Oregon Coast is accessible and open to the public, and casual mining is allowed on the beaches.

There are two good accesses to this area. One is right at Whiskey Run beach. Go north of Bandon a couple miles and turn off on Seven Devils Road. Then look for Whiskey Run Rd and turn left again. The beach is about 6 miles north of Bandon. You can continue a bit further north and access Merchant Beach at the Seven Devils Wayside. Both areas will produce gold and were mined in the past.

You aren’t allowed to run a recirculating system on the beach because it is considered “motorized equipment.” However, it is my understanding that you are allowed as long as you are above the high water mark (i.e. vegetation line) on the beach. On my last trip to southern Oregon I saw two different groups using a Gold Cube up in the parking areas at various areas along the coast. You might want to get further clarification on this before you go.

You can set up a sluice box right in Whiskey Run Creek where it flows into the ocean. You don’t need much flow, but feed the sand in slowly so you don’t overload the riffles. 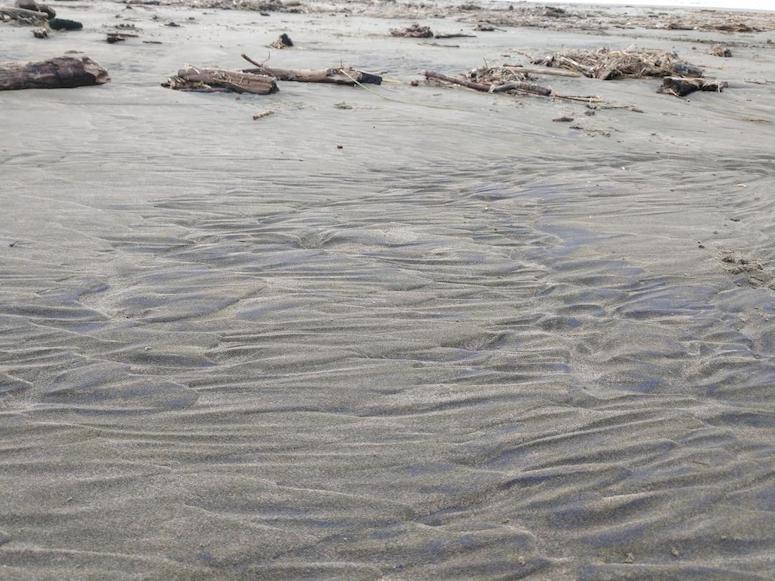 The blonde sands will be mostly barren. The gold will be hiding in the black sands. That is what you will want to process through your sluice.