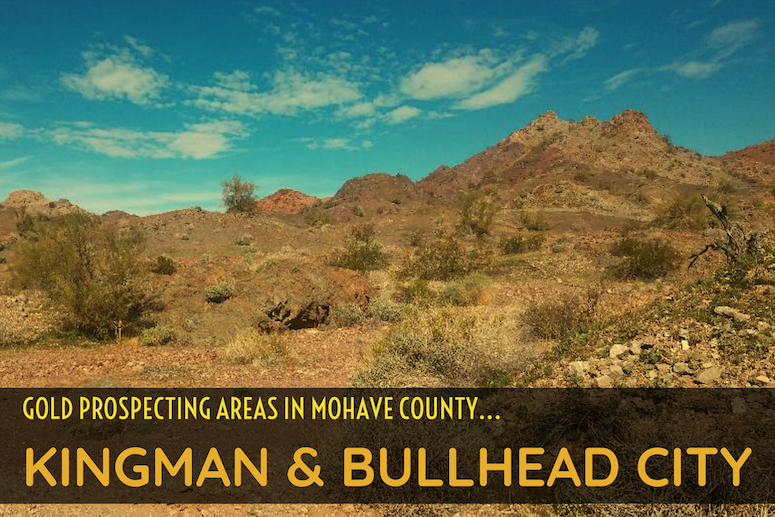 The purpose of this article is to provide some basic information for gold prospectors exploring the desert around Kingman and Bullhead City. There are quite a few good spots worth prospecting, but the desert is vast and it can be hard to know where to start.

The good news is that Mohave County is the 2nd largest gold producer in Arizona. Your efforts will be most productive if you focus on the historic mining regions.

There are many places that have produced both placer and lode gold deposits. Lode sources were some of the biggest producers, but for the small-scale prospector they aren’t always the best place to look. Shallow placer deposits that can be worked by drywashing and metal detecting are usually more productive.

Some areas have resulted in some nice nuggets. Of particular interest are those found in Lost and Gold Basins. Other deposits can be found and worked productively for smaller gold. Let’s take a look at some of the historic gold producers in this area.

This mountain range begins just north of Kingman and extends about 30 miles toward the town of Dolan Springs. There were a few mining districts within this range. The best known is Chloride. This area has mesothermal vein deposits which result in high amounts of silver, gold, lead and zinc.

Chloride is easily accessible from Highway 93. You will see lots of old prospects and abandoned mines in this area, several of which extended for several hundred feet into the mountain. As for placer deposits, these were much less productive, mostly on the western drainages of the Cerbat Mountains. Total estimated production was small.

Believe it or not, there was a fair amount of gold mined along the Colorado River during the early days. Decent placer deposits were worked south of Topock as well as the section of river north of Bullhead City and Laughlin and clear up through the Grand Canyon. Early miners worked both sides and could recover decent gold, although there were better areas and most miners moved on to “greener pastures” after a short time.

Much of the better areas are now inundated by Lake Mohave and Lake Mead. Special land designation also prohibits mining in many areas now so you can no longer prospect even though there is certainly gold left.

The gold being found at Gold Basin is often unearthed by individual prospectors swinging metal detectors for gold nuggets. There were several large mines once operating here that extracted free-milling gold from granite and schist ores. Specimens are not unheard of and often contain a lot of quartz with thick veins of gold running through them.

Gravel arroyos and gulches throughout Gold Basin still hide gold nuggets. Years of intense prospecting activity means that nuggets are often scattered far and wide, but they are still there to be found. The most successful prospectors generally use an extra sensitive detector like the Minelab Gold Monster 1000 to scan gulches and exposed bedrock for small nuggets.

South of Lake Mead in the hills southwest of Meadview are a cluster of gold mines that cover several square miles. The largest in this area was the King Tut mine.

Gold was known in this area by the mid-1800s, but it wasn’t until the Great Depression that any significant mining took place. Placer deposits are found on both the east and west side of the Last Basin Range in the alluvial gravels. Workable deposits are fairly widespread and would offer good opportunity for exploration. 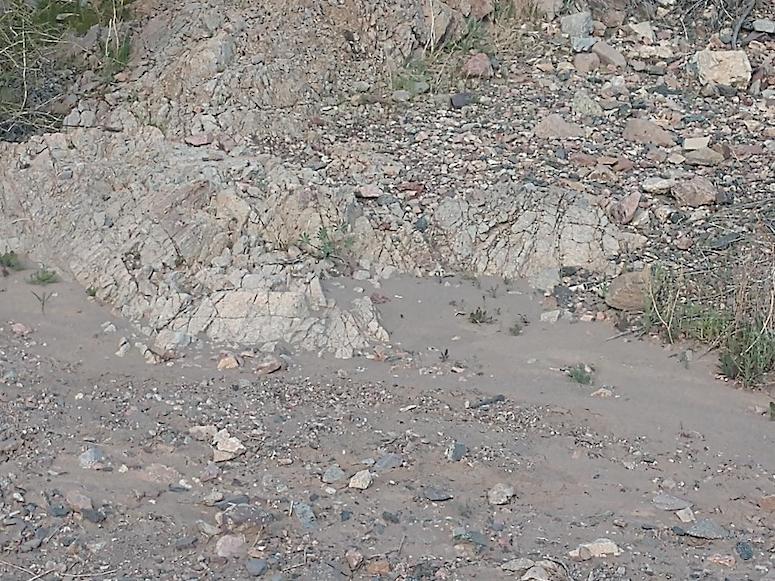 Prospectors will have the best odds of finding gold by locating areas of shallow bedrock like this. Areas with too much overburden will take a lot of work to get down to where the gold is. Exposed outcrops of bedrock can be scanned with metal detectors and will often hold small nuggets down in the cracks and crevices.

Gold has been found in many small gulleys at the lower elevations of the mountain range, most notably at the edges of mineralized granite ledges. There are certainly some minor and undocumented gold sources in this area that would warrant further exploration.

Of course, it is not secret that the largest mining area is located between Kingman and Bullhead City in the Black Mountains. This region was one of Arizona’s biggest mining districts and accounts for the majority of the gold credited to Mohave County.

Oatman is the famous mining town here and a very popular tourist destination. If you live in this area then you are probably familiar with the feral donkeys that casually roam down the streets looking for a handout from visitors.

Despite the intense mining activity that occurred here for many years, almost all of the production is credited to large underground mines who worked the epithermal deposits. Ores required stamping and cyanide processing to release the gold from the host rock. Mines extended from the Oatman area to well north of Union Pass.

Small placer deposits were worked on Silver Creek and its minor tributaries around Oatman and Mount Hardy. These are almost always smaller particles that can be recovered by drywashing.

Next: Mining in Arizona – A County-by-County Breakdown