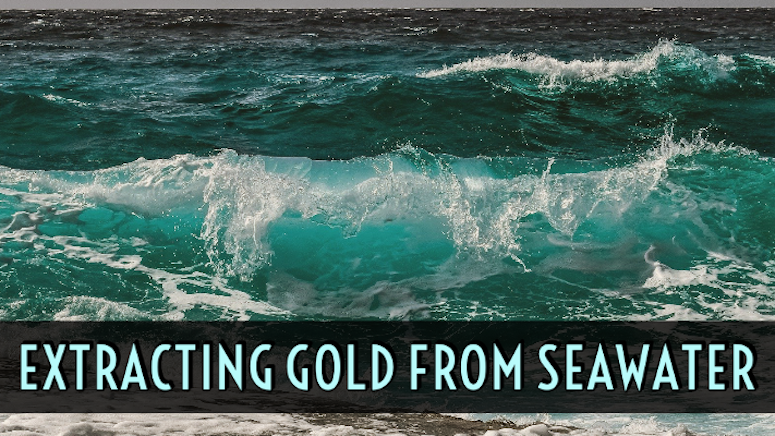 Many have crossed oceans and seas to a foreign land to seek their fortune. Pages of history books are full of such people. But, why cross the mighty oceans when we can find our destiny in it?

Our oceans and seas are filled with precious metal gold. Not on the floor, but in the water. Is there a fortune to be made?

How Much Gold Is There in Seawater?

It’s only natural to ask; how many have become rich by collecting gold in seawater? The answer is: nobody. Scientists concede the fact that there is gold in the ocean and seawater, but in such tiny concentrations that an economically viable recovery has not been discovered yet.

Two scientists from the Massachusetts Institute of Technology, John Edmond and Kelly Kenison-Falkner, have analyzed the water samples taken from some of the salt-water bodies around the globe. According to these geologists, the water in the North Pacific and the Atlantic contains just 1 gram of the yellow metal in every 100 million tones of water.

Of course, it’s the sheer quantity of seawater that piques interest. The oceans contain 13,000 million tons of water… so even with such small concentrations there is a whole lot of gold in that water… but it’s spread across the entire globe.

The Quest to Extract Gold from Seawater: The Story So Far

The dream of collecting gold suspended in seawater isn’t a recent one; it’s at least 150 years old. Experts believe our saltwater bodies would yield a total amount of 20 million pounds of gold. This data wasn’t available to the adventurers and dreamers in 1872 when Edward Sonstadt, the British Chemist, announced that gold can be found in the seawater. This sensational piece of news brought out the best and worst of humanity.

People who had for decades heard of gold rushes around the world started dreaming of swimming in gold (anybody remember Scrooge McDuck?). Many con artists had a field day after the announcement. The biggest scam to hit the headlines was when Prescott Ford Jernegan, a New England Pastor, claimed he has invented the machine that could collect gold from seawater. He named the machine Gold Accumulator, which is supposed to use electricity and mercury for the purpose.

Jernegan and his friend Charles Fisher established the Electrolytic Marine Salts Company. To drum up support for their new venture, they claimed the Long Island Sound alone had enough gold to pay the country’s debt and almost fill the treasury. A demonstration of the gold accumulation process was also staged for the benefit of some would-be investors.

By the end of 1898, the company managed to collect $1 million from investors. The company even opened a manufacturing plant in Lubec, Maine to build 1000 Gold Accumulators. In July of that year, things began to unravel as many investors deciding to take a closer look at the activities of the company. As news of the scam came to light, Jernegan ran away to Europe and was lucky to escape jail time, and his friend Fisher was never heard of again.

The million-dollar scam didn’t stop others from attempting the nearly impossible. Across the Atlantic, Henry Clay Bull, an inventor, applied for a patent for a method to suck gold from salt-water bodies. The patent was never used.

Gold in the ocean cannot be extracted by mechanically methods… it’s too small. In fact, the particles are invisible and suspended in the water. No one has (yet) invented an economically viable way to extract it. If they ever find a way to get gold out of seawater profitably, it will undoubtedly change the entire face of the mining industry.

After the end of WWI, Fritz Haber, a Nobel laureate, began working on a process involving electrochemistry and centrifugal force to extract gold from the sea. The project was shelved after a short period because the team had miscalculated the available gold in waters of the seas and ocean. The scientist realized that it would cost more to produce gold from seawater than the actual value of the gold itself.

A decade later, Dow Chemicals informed the American Chemical Society that they can develop a process within 10 years. They presented the example of bromide, which was in the past a difficult substance to extract. Like bromide, the company planned to find a special process that could allow them to separate gold from the mineral waste accumulated from the sea. The company never quite managed to discover the special process.

In 1941, a news report published in the Times stated that a Columbia professor has come up with the process to produce gold from the bromide-extraction method. The professor, Colin Fink, also applied for a patent, but nothing came of it. In 2002, Joy Prakash Agarwala, an Indian scientist, claimed he has found a new chemical method to produce gold from seawater. But, not much was heard from him again.

For a long time no scientist, conman, or dreamer came up with a scheme to mine the gold in water; nobody worth mentioning, at least. This meant the modern generation was oblivious to such schemes and inventions. The peace was broken and interest piqued when Mark Sullivan, a biomedical engineer, and inventor, revealed to the public his idea to produce gold as a byproduct while generating clean energy from oceanic turbines. The news went viral, but the investors in the ‘Shark Tank’ show weren’t convinced.

The Polymer Sponge: New Method to Retrieve Gold from Water

Not too long ago, an article in the Journal of the American Chemical Society claimed that scientists are developing a new method to retrieve gold from electronic waste, sewage, seawater, and almost anything.

In this method, a polymer framework was developed with the help of Iron ions, 1,3,5-Benzenetricarboxylate and poly-para-phenylenediamine (PpDA). Sounds simple and easy, doesn’t it? Well, it’s not. The polymer is supposed to act like a sponge, absorbing gold and holding it inside the framework. Later, the sponge is destroyed and the gold is retrieved.

At least people in the know are very excited and optimistic about the new method. The developers claim that each gram of the polymer sponge can absorb 1 gram of gold. Plus, the method can successfully trap 99% of the yellow metal in any liquid is just 2 minutes.

The new technique has yielded positive and satisfactory results in the little laboratory experiments done far, but there’s still a long way to go before we see a gram of gold extracted from our seas and oceans.

Can it Ever Happen?

The presence of gold in seawater is a known fact. Even in tiny concentrations the cumulative amount of gold across the world’s oceans is estimated at 20 million pounds of gold! That’s enough to attract interest from scientists and dreamers alike.

If we someday figure out a way to do that, it could change the mining industry forever.

Next: Will the Next Gold Rush be the Ocean? Deep Sea Mining