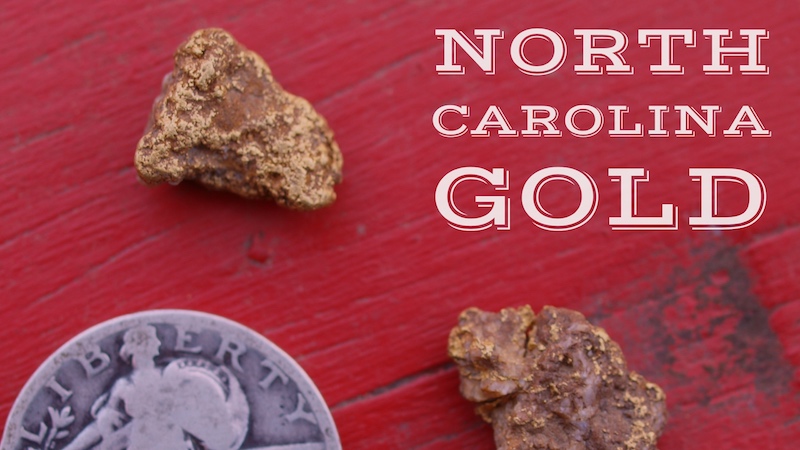 North Carolina State held the distinction as having the first documented gold discovery in the United States. It dated back to 1799 when a young boy named Conrad Reed found a 17-pound gold nugget along the banks of Little Meadow Creek.

Although it went unidentified for several years, eventually it was determined to be gold, and the Reed Gold Mine was developed. As Conrad’s father started hunting for gold with three more of his partners, it was soon proven that the earlier gold nugget discovery was not a fluke. They found an even bigger nugget weighing at 28 pounds. This second discovery really caused the gold rush as everyone started to search for gold on their properties.

Unlike the gold rushes in other states where the earlier discoveries and mining were propagated by professional prospectors, in North Carolina, local farmers were the people to start mining the land. They would mine the placer deposits under shallow soil after farming seasons and nearly depleted the placer gold by the 1820s. The first lode gold mine was started in 1825 in what is now in Montgomery County.

Since then, extensive amounts of gold have been found and produced in the immediate area. Overall gold production is the area has come mainly in the form of lode deposits, although the rich placers have produced many thousands of ounces of gold as well. 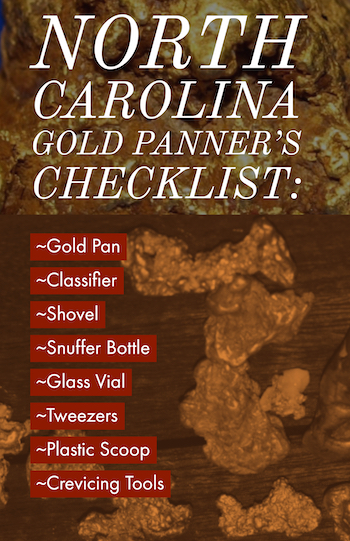 Gold in North Carolina was primarily found within the Carolina Slate Belt, just as in the other states of the Southeast. It runs diagonally across the state parallel to the Atlantic Ocean, from the northern end starting around Granville, Person, and Caswell Counties, and then stretching towards the southwest portion of the state in Union, Mecklenburg, and Gaston Counties, where numerous rich placer streams can be found.

The Granville County streams are especially rich in placer gold which deposits as a byproduct originating from the copper mines in the area. Same can be said for Caswell and Person streams and even basic panning can hand someone a sizeable nugget.

Other important counties within the belt where gold mining was predominant included Guilford, Montgomery, Moore, Orange, Randolph and Stanly. The belt also included the noted mines of the Gold Hill and Cid Mining districts and such mines as the Reed Mine in Cabarrus County; the Gold Hill Mine in Rowan County; and, the Silver Hill Mine in Davidson County.

The Reed mine deserves a special mention as the place that started it all. The mine remained in operation till 1912 almost 70 years after John Reed, Conrad Reed’s father’s death. Unlike other farmer/miners of the area, John ventured underground once the surface placer gold was depleted. The mine slowed down during the American Civil War and produced its last large gold nugget in 1896. Reed mine is now a state historic site and one can take a tour through the mine and underground tunnels.

In the Mountain region, mines and prospects were located in Ashe, Buncombe, Cherokee, Clay, Henderson, Jackson, Transylvania and Watauga Counties. Copper mines in Ashe and Swain Counties produced gold as a by-product.

Watercourses, like Little Buffalo Creek in Rowan and Cabarrus Counties, Dutch Buffalo Creek in Cabarrus County, Cabin Creek in Moore County, the Uwharrie River in Montgomery County and streams in the South Mountain areas were all places that were mined for gold. Both placers and lodes today however, are mostly located on private properties, and will require landowner permission before prospecting.

Burke County is situated in one of the most productive gold mining areas of North Carolina. The majority of drainages in this county will contain placer gold deposits.

The area around the town of Morganton is very rich. The Catawba River has many placer deposits in this area, as well as Silver Creek, Canoe Creek, Wilson Creek, Upper Creek and Johns River, and countless other drainages in this area. Do not limit yourself to just the main creeks and river in this area, as literally any drainage has the potential of having good gold deposits. 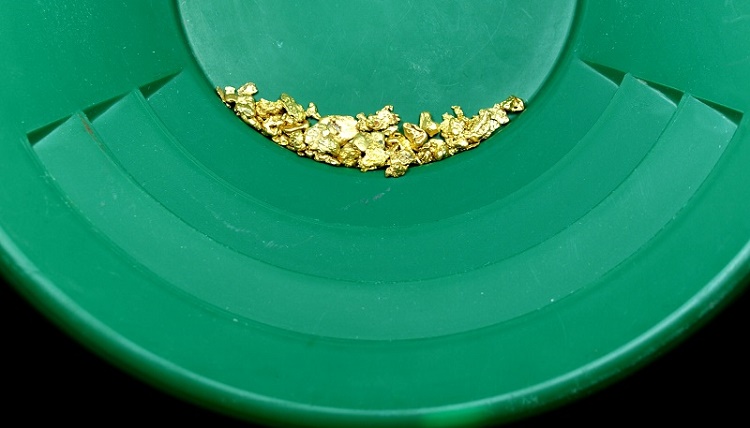 All the regional streams and bench gravels contained placer gold in Cabarrus County. This historic county was the location of the first discovery of gold in the U.S. It was in Little Meadow Creek at the family farm that young Conrad Reed found a 17-pound rock containing gold.

Many waterways in this county have yielded good placers. Promising areas along the Rocky River were in the lower Cabarrus region towards Stanly County. In addition to the huge chunk of gold found by Conrad Reed, many other large nuggets have been found here as well. This area is rich in both placer gold and lode gold. Even after hundreds of years of prospecting, miners still find the occasional gold nugget every now and then.

Gold-bearing specimens have been found in old mine dump sites around the area of Cowee Creek in the town of Franklin within the Nantahala National Forest. Metal detectors may be the best method to locate these nice pieces of gold within the waste material. This can be said for many of the lode mines throughout the southeast that produced free-milling gold large enough that it could be found with a metal detector.

Mecklenburg County probably contains more mines and prospects than any other county in North Carolina. The principal mines were the placer-producing Capps Hill, and the lode gold-producing Rudisill and Saint Catherine Mines, where productions of tens of thousands of ounces were reported.

Most of the Uwharrie National Forest is contained within Montgomery County. This is a fantastic place for panning, with a rich history of both lode and placer mining throughout the area. The Uwharrie River itself can produce good amounts of gold in some areas. The Little River is another good place to search for placer gold, as well as any number of tributaries that drain into the main river systems.

Apart from the Uwharrie river system, the creeks of Davidson County are worth checking out as they are known to regularly produce placer gold and nuggets. Prospectors usually target the low water flow season to use sluice boxes and pans to extract gold from the rivers and creeks.

Many thousands of ounces of gold have been produced in Montgomery County. In the extreme northwest corner of the county, there were several regional gold mines; among them were the Bright, Ophir, Dry Hollow, Island Creek, Deep Flat, Spanish Oak Gap, Pear Tree Hill, Tom’s Creek, Harbin’s, Bunnell Mountain, Dutchman’s Creek and the Worth Mines, which were all instrumental in the state’s mining history. This area still holds excellent potential for gold hunters today when you consider the good amount of land with a rich gold mining history here. 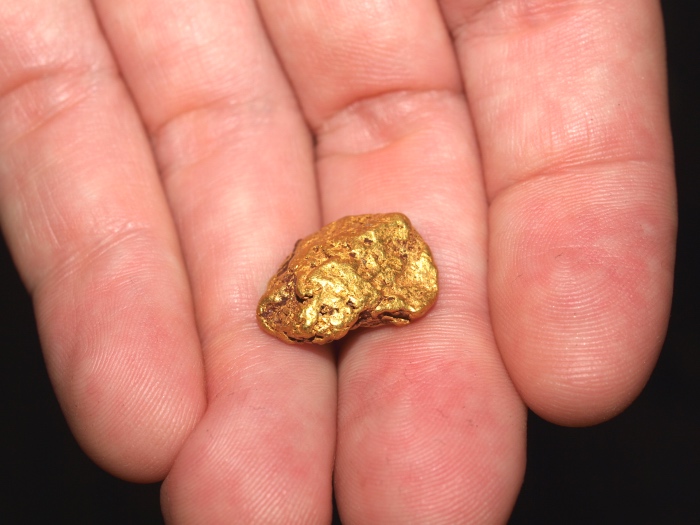 There are several options for public panning sites. These are good options for casual prospectors because there is a lot of private land to contend with in North Carolina.

Gold City Gem Mine and Emerald Village are perfect places for such activities.

There are many guided camping and panning tours available in North Carolina including The Thermal City Gold Mine where mining supplies are provided, camping is arranged, panning and other prospecting techniques are taught. The charges are quite reasonable and give you access to good ground.

Due to the state’s rich history or gold mining and prospecting, North Carolina allows locals and tourists to engage in recreational mining and panning without the requirement for permits. The same is true for state owned reserves and forests. Federally owned land and reserves often have much stricter rule. But as a rule of thumb as long as you are not using heavy machinery, explosives or other commercial methods, prospecting and panning in North Carolina is fairly simple and easy.