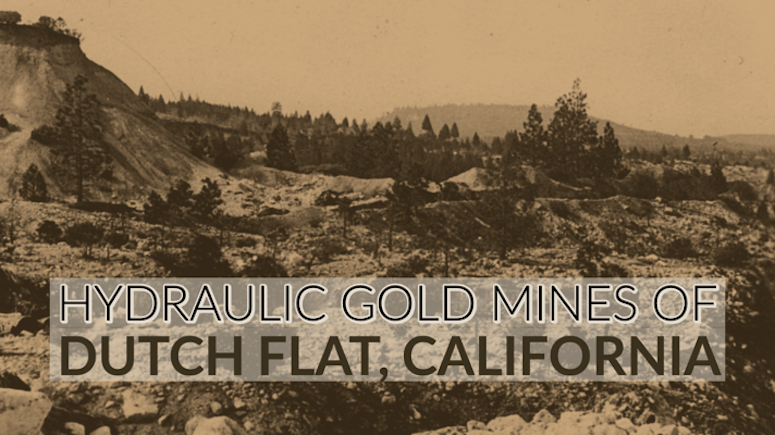 Dutch Flat is considered one of California’s richest historic gold mining sites. For a time, this mine in Placer County was bustling with activity. The ground was heavily claimed and worked extensively for decades. The site is now very popular, sitting right alongside Interstate 80 on the pass between Sacramento and Reno.

When gold was first discovered in 1851, this region was already bustling with activity. In those early years, it was primarily individual miners, who would dig for placer gold in the surrounding creeks and rivers. The closest mining area was at Bear River, which was particularly rich and heavily placered during those first few years of the Gold Rush.

These were the “pick and shovel” guys who put in back-breaking labor to extract gold from the gravels. And there was very good gold, the cost of living was very high, and it was tough to make a living even when recovering many ounces of gold per day.

Mining like this continued through the 1850s. Just about every water in the vicinity would turn up some gold, and Placer and Nevada counties were as busy as anywhere in California during this time.

But it was later arrival of hydraulic mining that really brought attention to this area, and the reason that we can still see the scars of mining at Dutch Flat even today. 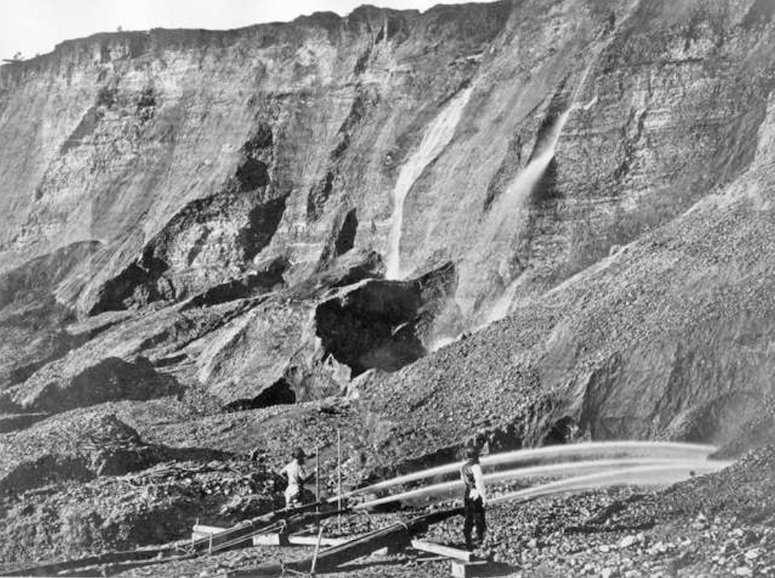 Mining at Dutch Flat peaked in the 1870s, when the Cedar Creek Mining Company began using hydraulic monitors to wash the ancient gravels.

in 1859, two canals were constructed in this area that changed mining considerably. The arrival of water allowed miners to work the ancient, gold-bearing river gravels that were so prevalent in the area. Prior to these canals it was nearly impossible to work these areas effectively, limiting the mining activity only to the rivers, creek bottoms and gulches.

With the arrival of a good water supply, now bigger mining companies were attracted to mines that were once of little value.

This water could now be routed through hydraulic monitors. These were massive nozzles that could direct water at high pressure to wash the hillsides, breaking apart cemented gravels which contained gold. And while many of the gravels weren’t actually all that rich, the massive volumes of material that could now be processed through sluices and long toms allowed fortunes to be made.

If you visit this region today, you will be struck with the immense scale of the mining activity that took place. There is no question what occurred here, and it’s still easy to imagine just how much gold was recovered just by the amount of area that was impacted by the mines. While some vegetation has grown back, the scars of the early day mining area still evident and will surely remain for centuries to come.

The railroad that was constructed over the pass brought considerable Chinese laborers, which resulted in Dutch Flat having one of the largest Chinese settlements in California. Many of these Chinese men would eventually find themselves working at the surrounding mines.

During the peak of activity there were over 45 hydraulic mines active within just a few miles of Dutch Flat. In later years, the Cedar Creek Mining Company purchased many of these smaller operations and consolidated them into larger mining operations that resulted in millions of dollars in gold recovered. 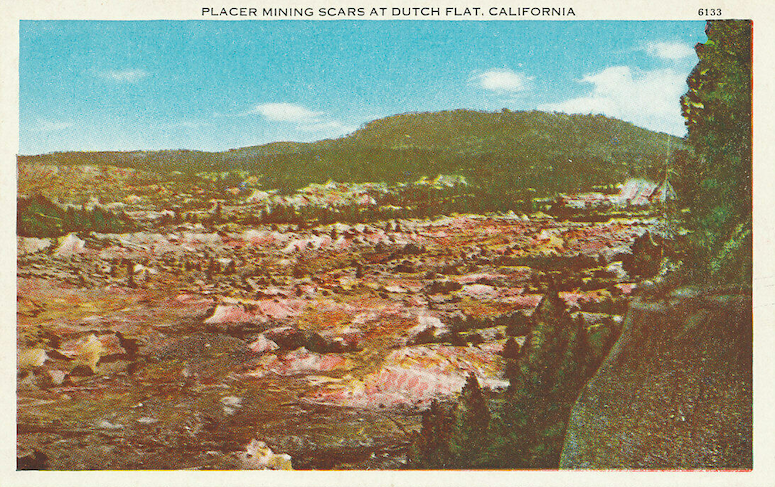 An old postcard from the 1920s shows just have extensive the placer operations were at Dutch Flat.

Many of the gravels where heavily cemented and had to be broken up with dynamite to be processed. One can only imagine what it was like to be there during the height of mining activity. Getting all of that gold out of the mountainside was no simple task.

The hydraulic mining activity in the Dutch Flat area was not welcomed by everyone. While it made many mine owners rich, it conflicted heavily with many others due to the extreme erosion that was taking place. Huge amounts of debris washing downstream causing damage. It was reported that there was as much as 70 feet of debris in the Bear River. Even more troublesome was the silt that washed down into the Sacramento Valley causing damage to farms and homes below.

The 1884 Sawyer Decision essentially stopped all hydraulic mining in California. In the coming years, the mining activity at Dutch Flat slowed to a crawl.

In the years that followed, some selective mining did take place. There were still rich gravels left to work, and drift mining was still a viable option in many areas. The richest “blue gravels” were known to carry the most gold, and could be mined profitably.

A handful of drift mines and quartz mines continued to operate into the next century, but generally speaking the town of Dutch Flat died out when the hydraulic mining stopped.