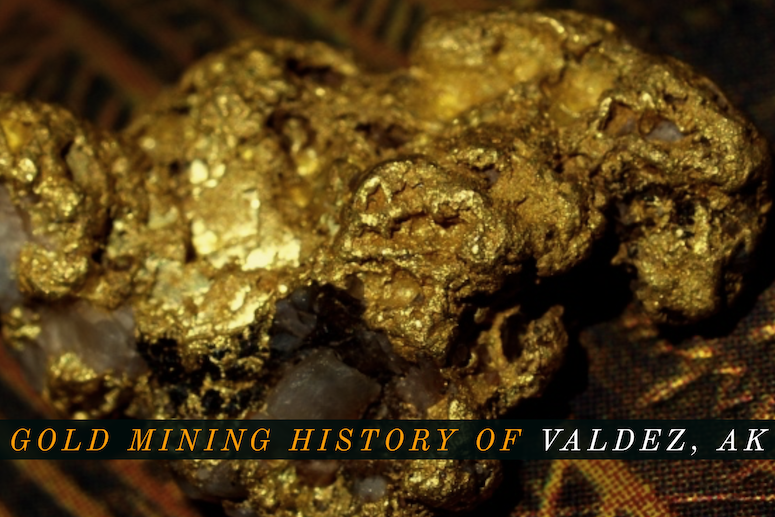 The great state of Alaska has a very illustrious gold mining history. The Klondike Gold Rush was one of the largest and most famous gold rushes in American history. It was also the last great gold rush in America, bringing hundreds of thousands of hopeful miners north in search of wealth.

However, what many people don’t know is that, while the Klondike Gold Rush largely occurred in the Yukon, Canada, part of its history starts in the city in Valdez.

This will be the focus of our article today. We will be looking at the history of Gold mining in the city, its role in gold production in the 1800s, and the state of gold mining there today. But first, let’s start off with a small background of the town.

Valdez is a small city about 100 miles east of Anchorage. The city had a population of roughly 4000 people.

Although modern day Valdez is considered one of the most important ports and commercial fishing centers in Alaska, its development and history is largely associated with gold mining activities that took place there about a century ago.

In more recent history, Valdez became the site of the Trans-Alaska Pipeline. Bringing oil down from Prudhoe Bay, the end of the pipeline in Valdez provided an economic boom to the region. Of course a large influx of oil workers into the area also brought crime and other challenges that come with a growing town.

The Growth of Valdez in Gold Mining

Contrary to what most people believe, Valdez was in fact not a mining town at first. There were limited gold deposits there for prospectors to explore. Instead, it was simply a key part of the Klondike Gold rush that occurred between 1849 and 1900.

In the late 1800s, large deposits of Gold were discovered in the Klondike region in Yukon, Canada. As a result, the region saw a massive influx of prospectors. At one point, it was estimated that over 100,000 prospectors migrated to Klondike in search of the yellow precious metal.

During this period, infrastructure was still poor and access to the gold in Klondike was very limited.

But this was in fact nothing more than hype. A lot of prospectors who flocked Valdez would soon realize that the Valdez Glacier trail was more challenging than they had thought. It was in fact twice as long and way steeper than it was reported.

Many prospectors who dared to brave the trail in search of Klondike gold died due to the cold winter and lack of enough supplies to reach the gold fields.

Valdez Flourishes as a Mining Hub

Although the reputation of Valdez as the easiest route to Klondike did not hold for long, the city would still find its way and flourish as a gold mining town. This came after the construction of the Richardson Highway in 1899.

It was the first major road to be built in the state of Alaska and it opened up the Klondike area for mining in a huge way. Valdez was now the first ice free port in Alaska that was connected to the interior parts of the state with a passable highway.

As a result, the city flourished. It became a huge center of commerce and played a key role in the transportation of gold across the region.

Eventually, valuable mineral deposits were found closer to Valdez. Although they were a far cry from those found in the Klondike, they still attracted a fair amount of interest.

The Cliff Mine was the first major discovery in the area. On the banks adjacent to Port Valdez, auriferous ore bodies were discovered as early as 1898. By 1910 there was mining activity in the area and minor gold occurrences were being worked.

A cluster of mines operated in Shoup Bay, west of the Shoup Glacier adjacent to McAlister Creek. Notable work has been done by the Shoup Bay Mining Company, at the Bluebird Property, Spanish claim and IXL claim, and other small lodes were worked for short durations. None of these deposits were exceptionally rich, but they were worked on and off for several years.

A variety of small lode mines can be found scattered north of Port Valdez. Minor occurrences of gold-bearing lodes have been explored, primarily in the headwaters of Mineral Creek. There is surely more ores hidden beneath the glaciers.

By the turn of 1900, Valdez had established itself as one of the most notable mining towns in North America. There was in fact a plan for the city to become a railroad link from Tidewater to the Kennicott Copper Mine.

The railroad would have also helped expand gold prospecting in the region, something that most expected at the time will make Valdez the undisputed mining capital of Alaska. However, in 1907 there was a shootout between two rival railroad companies over the control of the railroad.

The project was therefore abandoned. Instead, the railroad to the rich Kennicott mines was routed to the city of Cordova.

Valdez did eventually transition from its gold mining history and become a mixed economy town. Fishing, oil and mining are all still occurring in the Valdez to this day.

But its legacy in North American gold mining is still felt 100 years on.

The town can be proud of the role it played in the last notable gold rush in North America. The city also epitomizes the hunger for gold during the 1800s. It shows the risks and the extent prospectors were willing to go to get to this precious metal.

Nome, Alaska – Mining on the Richest Beach on Earth