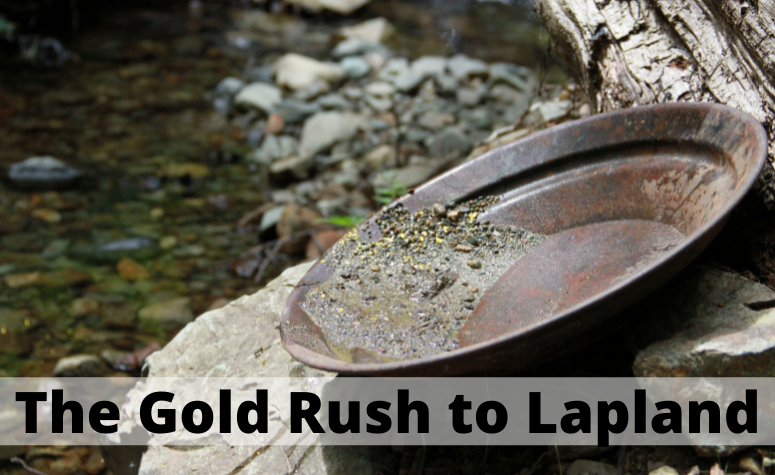 Well known to be the Happiest Country in the World, Finland is also one of the cleanest, boasting beautiful natural landscapes and piercingly fresh air. No wonder Santa Claus chose the country to be his home base! However, not many people know that Finland is equally rich in minerals, with a golden history of its own.

Our story begins in the village of Ivalo, where the midnight sun hangs above the sky for 70 days in a year. The Ivalojoki, or Ivalo River, winds through this area at a length of 180 kilometers (or 110 miles) to eventually join the Inari Lake. Gold discoveries in the 1860s on the nearby Tana River prompted geologists to search on the Finnish side of the river as well. When the authorities heard of this, news spread and further expeditions joined the fray.

The Start of the Lapland Gold Rush

In 1868, the first known gold discovery was made on the Ivalojoki, which garnered a significant amount of interest and anticipation. In fact, there was enough interest that the government enacted a law to allow every “decent” man of the Russian Empire, of which Finland was still a part, to legally prospect for gold and precious minerals. Alexander II, then Emperor of Russia and Grand Duke of Finland, approved this law in 1870 and the gold rush began in earnest.

The most popular area and primary site of the Lapland gold rush was located at the confluence of the Ivalo and its tributary, Sotajoki. This is in the area known today as Kultala, and housed the mining headquarters established in 1870. Before mining activity in the region burgeoned, the Ivalojoki had quietly rushed by grassland and quiet wilderness. Once news of the gold discovery spread, the swift construction of the Kultala Crown Station began.

Within a few months, cartographers, restaurants and post offices became part of daily operations. Prospectors secured their licenses and filed claims here, and any gold discoveries were measured and levied by the authorities as well. Kultala continued to remain active over the next few decades, and was even briefly used for northern lights exploration until it shut down in 1900 from disuse. Today, a few of the stone-walled buildings and an old sauna can still be seen at this iconic site in Finland’s mineral history.

Visiting today will serve tourists a quaint and quiet trip down memory lane, but at the height of the gold rush, Kultala was immersed in a flurry of activity. In the summer of 1870, there were more than 300 people working on various panning sites along the Ivalo. Each summer thereafter saw anywhere between 500-600 people working to pan along the famed “river of gold”, and by 1875 numerous cabins had dotted the riverbanks.

Kultala became one of the most populous settlements north of Finland, a far cry from its previous state where only a few natives, wild animals and the occasional explorer trudged through its snowy fields.

To reach the Kultala Gold Mining Village, there are multiple paths. The favored avenue to hike is from Pahaoja, where some hiking cabins or “wilderness huts” can be rented out today. A hiking trail roughly 12km long is marked from this area towards the Kultala, which is quite popular during the summers. Upon reaching the village, a suspension bridge hangs over the river that allows for breathtaking views. The northern bank upstream the Ivalojoki is very challenging to walk on due to the choppy waters, and is not a recommended route to reach Kultala.

Major claims at the height of the gold rush are estimated to have produced 10kg of gold yearly, with the largest claims having 30-40 men working on them throughout the week. The largest recorded nugget found in Lapland came from the Ivalo River at 390.9 grams. However, by 1880 gold discoveries began to taper and interest spread to the Tana River instead, which had more established communities and was slightly friendlier in terms of terrain at the time.

Other gold discoveries in Lapland followed in the early 1900s, namely in Tankavaara in Sodankyla, a neighboring municipality with the Kitinen River at its center. An international gold museum stands in Tankavaara today, detailing the full history of Finnish gold with several interesting displays year-round. 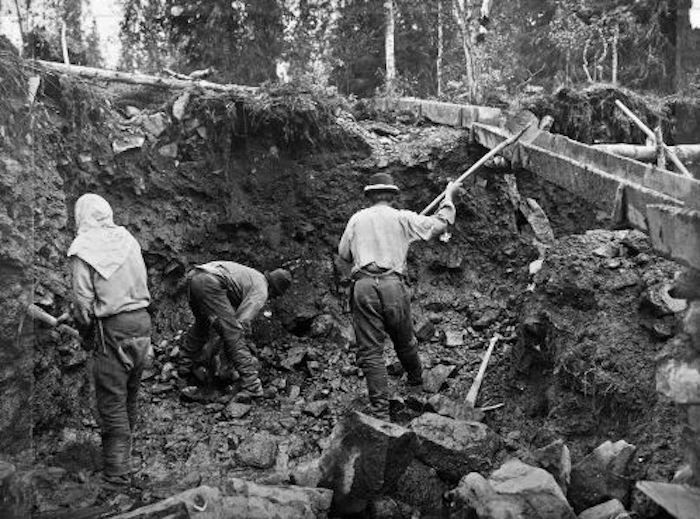 Gold was also found in the Lemmenjoki River in the 1940s, but this did not spark the same activity as the earlier discovery in Ivalo due to the strife of World War II. The area where gold was found was on the lower reaches of the River Morgamoja, near the mouth of Vaijoki River. However, many locals feel that the rich mineral deposits remain relatively untouched due to this period of “interrupted discovery”.

True enough, Lemmenjoki remains one of the most active mining sites in Lapland today, and has been recorded to produce more than 20kg of gold every year. The Lemmenjoki National Park was established in 1956, which surrounded the gold mining areas and eventually expanded to include these hotspots by 1971. To this day, many prospectors seek to unearth their wealth in Lapland, most especially in Lemmenjoki.

De to several disputes and nature conservation concerns, only manual panning and prospecting (i.e. non-automated gold mining) is allowed in the National Park as of 2020.

The Lapland region makes for a worthwhile sojourn not just for mineral wealth, but also for unforgettable views and rich culture. For any gold prospectors in Finland, this area will surely be a treat. Lapland’s mining villages evoke the spirit of bygone gold rushes, while its rivers sparkle with the promise of adventures waiting to be had.

Mining for Gold in Sweden