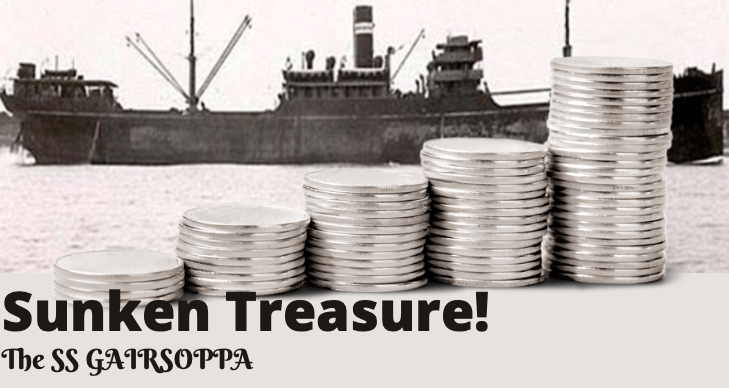 The ocean glimmers with each passing wave, winking at adventurers brave enough to explore its depths. Of the many adventures to be had in the water, treasure hunting amidst sunken ships just might be the most thrilling. It’s a siren song of ships that made an unfortunate watery detour, their riches untouched and stories untold.

One shipwreck that had its riches resurface is the SS Gairsoppa, a steam merchant ship of British origin.

A Ship Loaded with Bullion & Supplies

Amid the backdrop of World War II in 1941, the sea was the stage for a savage war between German U-boats and the Allied forces’ ships. SS Gairsoppa left Calcutta in December 1940 to join the convoy through to English docks, its cargo intended to refill the nations coffers. Laden with bullion, Gairsoppa weighed almost 7,000 tons in total and the worsening weather and limited maneuverability led to dwindling fuel supplies. Doubtful of their capacity to reach Liverpool in that state, the Captain sought permission on the 2nd month of their journey to dock at the nearest port, which happened to be on the western coast of Ireland.

Like a sheep caught away from the flock, Gairsoppa separated from the convoy and was spotted by a long-range German aircraft, the Focke Wolf Condor. If the Condor was the eye in the sky, the U-boats were the Wolf Packs of the sea, ready to spring into action and take down any Allied ships left vulnerable. An unescorted and heavily-loaded cargo ship was easy prey, and the Gairsoppa sunk a mere 20 minutes after being torpedoed.

The crew was given the order to abandon ship, but unfortunately only two lifeboats successfully made it into the water. Second Officer Richard Ayres was aboard, instrumental in the quick response that allowed them respite from the machine gun spray and raging fire of the wreck. 31 men out of the 85 strong crew of the Gairsoppa were on his boat, but none knew how to sail. Ayres repaired the damaged rudder with an oar, set course for east, and divided up the spare blankets and little rations amongst the shocked survivors.

They had been at sea for thirteen days before they glimpsed land, the Lizard Lighthouse on the Cornish Coast outlined in the distance. Unfortunately, punishing waves caught their lifeboat as they made for a small cove, with fellow crewmen drowning as it capsized and Ayres himself thrown up onto the rocks.

He was close to the end of his willpower upon seeing the fatalities, when he heard the voices of three young girls calling out to him to “keep swimming”. Betty Driver and the Martin sisters had been out for a stroll along the cliffs when they spotted the little craft, racing to call Coastguard for help and pull Ayres to safety. One can only imagine what a harrowing experience this must have been for a man who put the lives of his crew above his own.

Even beyond death, his respect for them shone through, as he ensured during his recuperation that the Muslim crewmen’s bodies to be buried in accordance with their religious rites. The bodies of the four crewmen were given proper burials in St. Wynwallows Church nearby. Richard Ayres was awarded an M.B.E. in recognition of his service, and the great efforts he’d taken to keep his fellow survivors alive.

What an irony that submarines downed the once mighty Gairsoppa and decades later, submarines were just as instrumental in its recovery. The team behind the cargo retrieval took painstaking efforts not only for the bullion but also for the rest of the freight aboard her. Other finds from the ship included enough tea to sustain about 65% of Britain’s population for an entire week. This was intended to help boost morale during the war, with Britain’s weekly prescribed tea rations measured 30 cups per adult.

Though a tragic tale, the recovery of the SS Gairsoppa was a boon from the sea. The preserved letters, photographs and postcards gave closure to the friends and family of the lost crewmen, and some remain on display in museums today. For those interested, an online exhibit called Voices from the Deep provides a visual tale on the recovered craft, echoing the atmosphere of wartime and man’s resilience in the face of adversity.

In 2011, the expedition that had been looking for the long lost ship struck gold—or rather, silver— around 300 miles off the coast of Ireland. A year prior, the UK government issued a mandate to salvage the silver bars that the ship had been carrying back in the 1940s. Odyssey Marine Exploration Inc. received the contract and upon successfully finding the ship, began the arduous task of documentation and recovery.

At this point, the Gairsoppa had sunk 4,700 meters below the surface, roughly half a mile deeper than the Titanic. The bullion recovery took more than a year, unearthing over 110 tons or 2,792 silver ingots from the wreck. This amounted to almost 99% of the recorded silver it was transporting, or a whopping €137 million in estimated value. As fortuitous as this gift from the sea proved to be, the Gairsoppa had even more hidden treasures in the form of preserved documents that gave insight to such a tumultuous time in history.

One of the Largest Shipwreck Recoveries EVER! The Ship of Gold