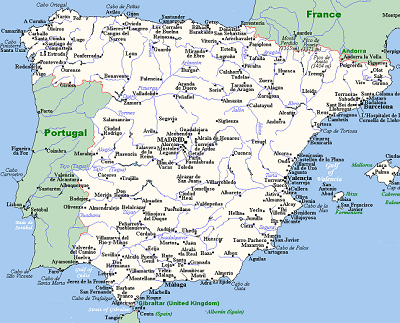 Mining in Spain began as early as 25 BC, and was done primarily in the Las Medulas area. As prospectors fanned out and explored new areas, gold was soon found in the Almeria area in the Northeastern corner of Spain.

Mining activity really got started in Spain after the Roman invasion. Wanting to increase their wealth, along with the use of free labor after gaining dominance over the territory.

Early prospectors in the country used standard alluvial panning methods to search for fine gold deposits in the creeks and rivers throughout the gold bearing regions.

This process has changed very little from the time they used it then to the method that is still used today, but more modern plastic gold pans

do help speed up the recovery process. Material suspected to contain gold is scooped in a pan and water added to it. The pan is then swirled at a 45 degree angle and the lighter material is lost, leaving behind just the gold and heaviest materials.

Of course this method is only viable for surface placer deposits on a small scale.

Even very early in history, the Romans understood the power of water to expose and release gold deposits for the earth. Hydraulic prospecting was used at Las Medulas, in the El Bierzo Region. Aqueducts were used to transport water from nearby creeks and rivers. This method continued to be used during the many gold rushes in the mid to late 1800s, and still continues today in many areas around the world.

Placer gold deposits are not the only gold occurrences in Spain. Some of the bedrock in the country is known to contain Kimberlite ore that contains gold. This ore can still be processed to release the gold values, but is generally done on a larger scale operation.

With the present high price of gold, there is a lot of prospecting taking place within the country. Areas such as Peralonso and Cabeza de Caballo in Salamaca Province of Western Spain as well as in the Zamora Province. Several companies are actively searching for gold and tungsten deposits.

The Ormonde Salamanca Company is doing exploratory prospecting within Spain.

Other areas with potential gold deposits which have been of interest for mining companies is in Northwestern Spain. The known gold-bearing area covers about 300 square Kilometers. Astur Gold Corp has been conducting some exploration activities within the region since 2010.

Another Company, Medgold, is also running the Pinzas Gold project. The project is located in Galicia, in northwest Spain. There are high hopes of finding good deposits of Gold since most of the Northwest regions of Spain have tested positive results. More companies are showing an interest in prospecting for Gold in the country. An Irish exploration company is planning to have a project at El Valle, about 100 kilometers from Salave.

On a large scale, the future potential for of gold discovery looks bright considering the renewed interest from various mining companies in recent years. If the case ongoing prospecting activities within the country become successful, they will serve as a huge milestone to its gold production capability.

For the average small-scale gold prospector, the opportunities for finding gold will vary depending much on accessibility. Acquiring access to private lands and areas that are currently being mined for gold can be difficult. Nonetheless, there are small placer deposits that can be found in many of the creeks within Spain. Focus should be given to those areas that have historically produced gold in the past.