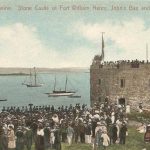 When we talk about ghost towns in the United States most people think of the old ghost towns are found in the Old West. Really though, every state has ghost towns and Maine is no exception. Maine is dotted with numerous ghost towns across the entire state. Most of the ghost towns originated in the […]